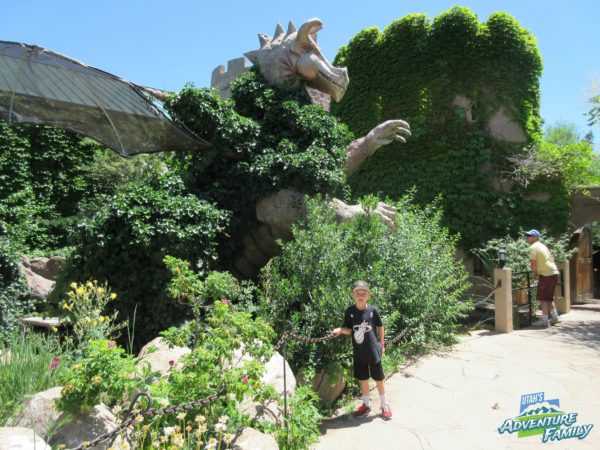 The Botanic Garden in Albuquerque can be seen in conjunction with the ABQ BioPark Zoo and Aquarium. A short train ride connects the zoo to these sites, and there is one price for all three. We really enjoyed the Albuquerque Botanic Garden, even though we didn’t have time to walk through the whole area.

The gardens are divided into sections, and one of our favorites was the Children’s Discovery Garden. This is a nice area where you shrink down to bug size and walk through a huge world. There are ants just your size along the trail and carrots that tower above you. Our boys enjoyed playing tag in the giant pumpkin and there was a log slide that was pretty popular. There is also a maze of anthills and every once in awhile you notice a huge dragonfly or spider hovering above you! We could have spent all day just in this area, but with the zoo and aquarium we were limited on time.

The second thing we liked about the gardens were the miniature trains. There is a huge area with many trains running along tracks. It probably covers several hundred square feet, and it is built right into the garden. Make sure you check the times that the trains are running, because they don’t run every day. You can also spy tons of little details along the tracks if you pay close attention.

Next we admired the beauty of the pond, which had flowers and statues next to, and in it. There were a few trails that went around the pond, and down to the edge. We even spotted a frog.

Our favorite thing in the Albuquerque Botanic Garden, though, was the Bugarium. This is a building all its own dedicated to bugs. There are big hairy spiders to look at, large cockroaches and walking sticks, and lots of information to learn. Our favorite thing was a rope stretched across the entire building. Leaf-cutter ants were dutifully carrying leaves right over our heads from one side of the room to the other across the rope. Going in one direction they held up pieces of leaf much larger than their bodies, and going they other way they were empty-handed. It was fascinating to watch. The boys also enjoyed the bug screen, where they flapped their arms as a bumblebee trying to collect enough pollen to support their hive.

There are many more things to see at the Albuquerque Botanic Garden, too. We saw the farm area from the train ride, and there is a Butterfly Garden that wasn’t open when we visited. You could easily spend a day there, but after the zoo and aquarium, that was all we could manage. Stop by and see it for yourself!

18 of the Best Parks in Davis County