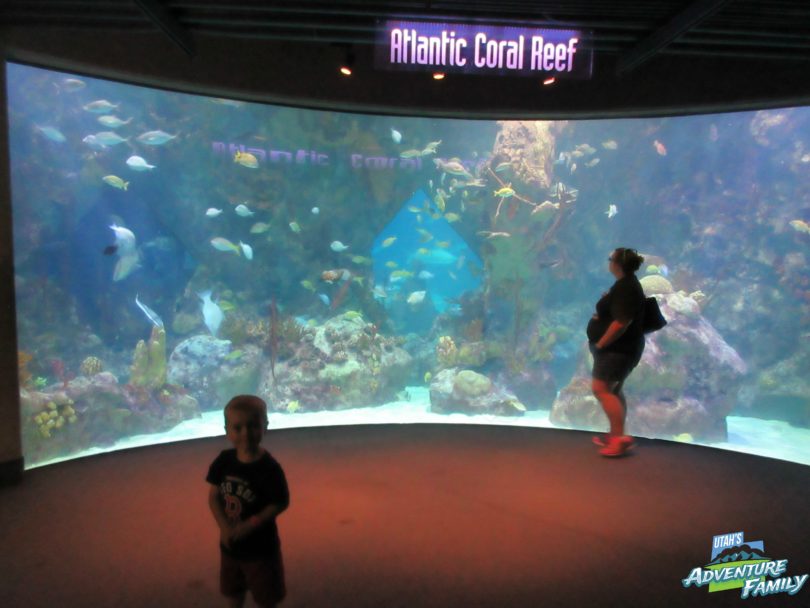 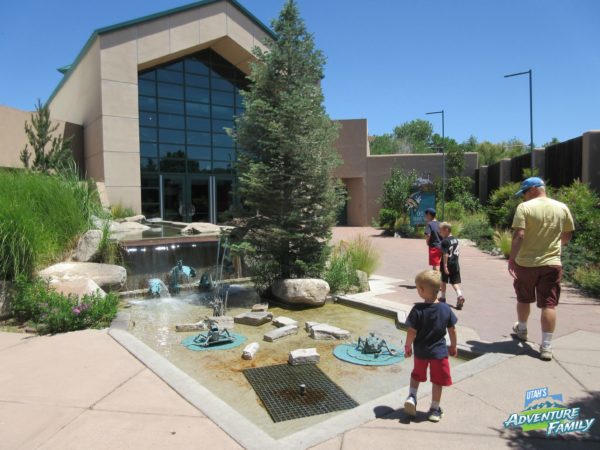 The Albuquerque Aquarium is pretty small as aquariums go, but it is located in the ABQ BioPark, so your admission price includes the Aquarium, Albuquerque Zoo, and Botanic Garden. In addition, you can ride the train between the zoo and the aquarium, which takes about 25 minutes, so we visited all three sites in one day. The aquarium is located next to the Botanic Garden.

The aquarium starts with some displays of local area fish. These are small, and you can walk through fairly fast. Next, there are some jellyfish and seahorses. They are both worth stopping to look at. There is a large open topped tank, too, that has rays swimming around. You aren’t allowed to reach in and touch the rays, though, so don’t put your fingers in the water. 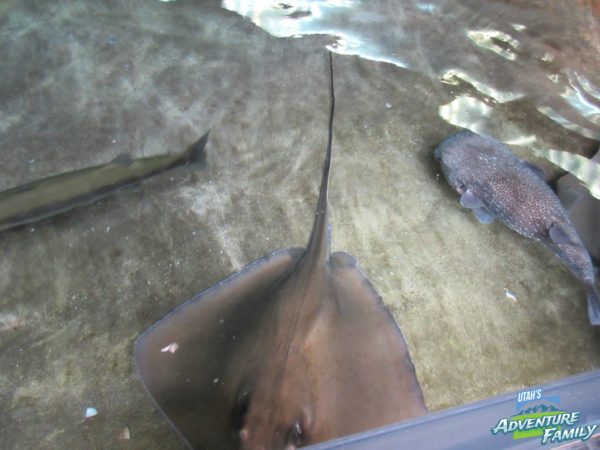 You can get pretty close to the fish and rays at the large open tank. 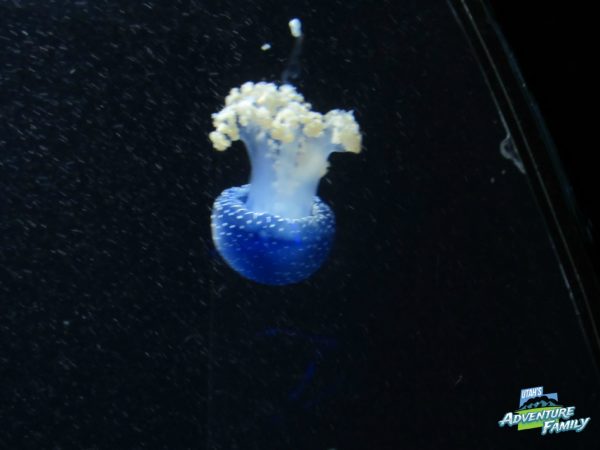 We loved looking at the jellyfish.

There is also a tunnel with colorful ocean fish from around the world. There were so many different kinds and colors the boys could have looked all day and not seen them all. The tunnel was one of the most popular parts of the museum.

The other part was the massive tank right at the end. There were sharks and turtles swimming right next to the huge glass wall, and the tank was so big you couldn’t even see the back of it, which it turns out is one wall of the restaurant on the other side. When we were looking in this tank, there were two scuba divers scooping up the sand and dropping it. Many of the smaller fish were scuttling along beside them picking through the rocks as they went. We weren’t sure what they were doing, but it was sure funny to watch as they swam in the tank with the fish. 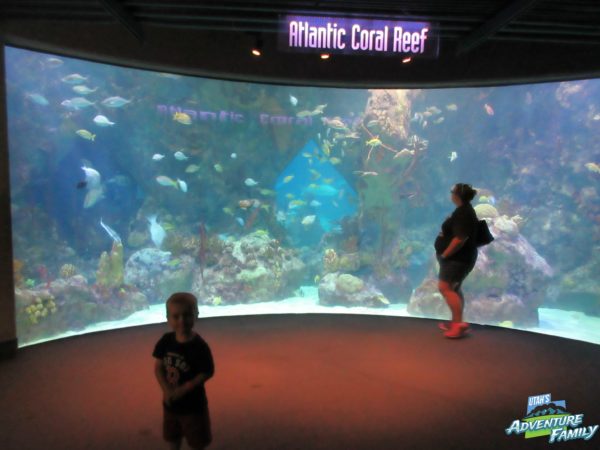 You will see this large Coral Reef tank before you enter the tunnel. 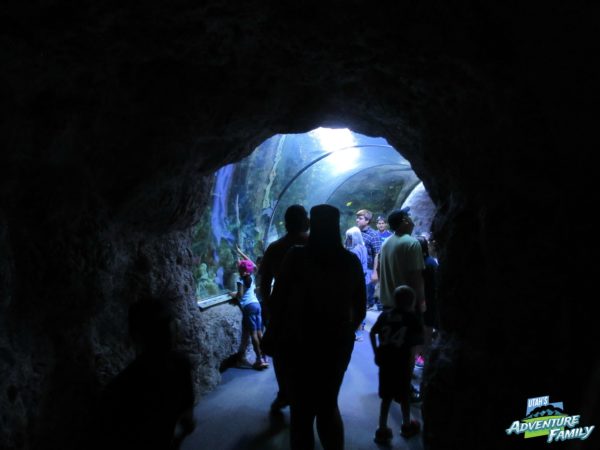 The tunnel is definitely the highlight of the Albuquerque Museum. 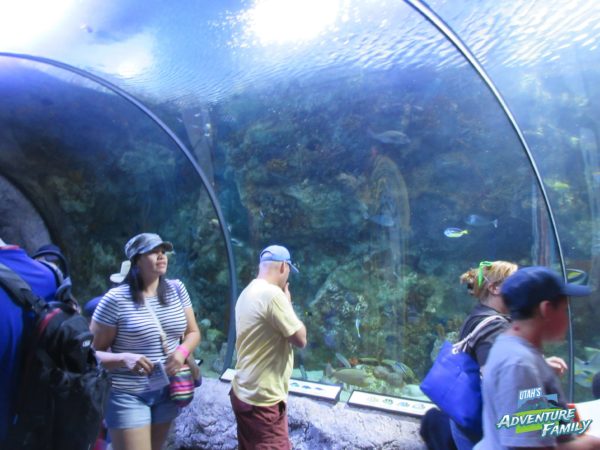 The tunnel was very busy, and there was a lot to see. 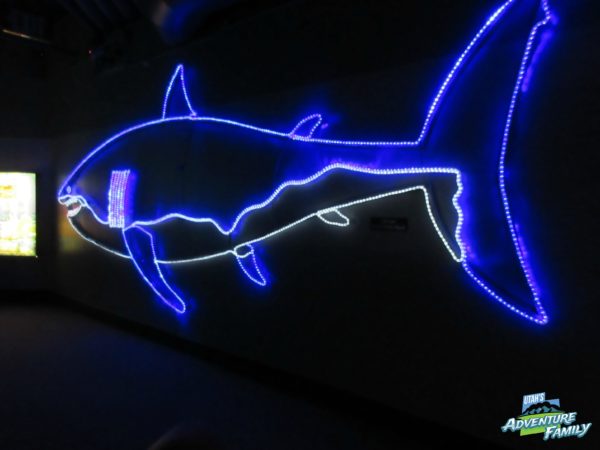 Our boys loved this shark. It is the actual size of a great white shark. HUGE! 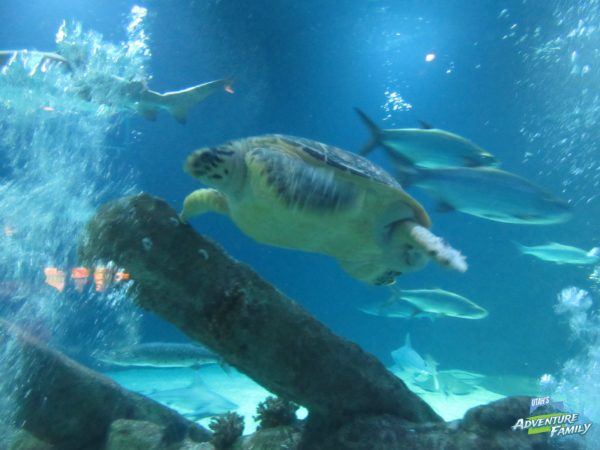 The large tank at the end of the aquarium is full of turtles, fish, sharks, and more.

What we enjoyed most at the aquarium was actually the restaurant. We went to the zoo in the morning, rode the train to the aquarium for lunch, and then saw the aquarium and the botanical gardens. This worked perfectly. Though the restaurant was a bit pricey, it was really fun, because the back of the large tank in the aquarium makes up one of the walls of the restaurant. So as we ate we saw huge rays, sharks, and sea turtles swam right next to our table. There was a moray eel, a massive puffer fish, and many others that swam around this part of the tank. Some of them didn’t swim to the other side, so you can only see them from the restaurant. We recommend planning your day so you can have lunch at the aquarium. It was the highlight of our day. 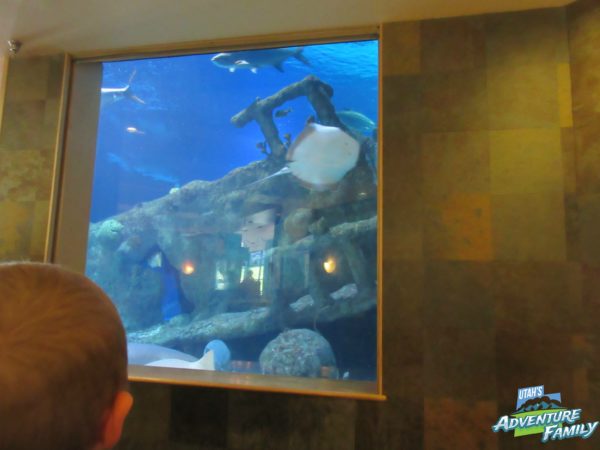 Eating next to the tank in the restaurant was a lot of fun. 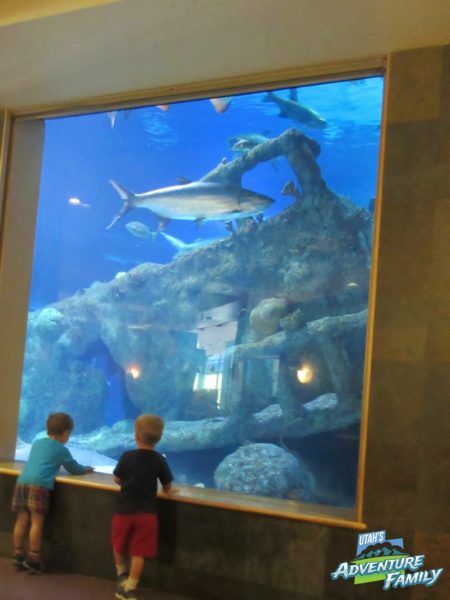 The boys (and some friends) loved looking for different types of sea creatures while we waited for our food.

Plan to spend only about 45 minutes to an hour in the Albuquerque Aquarium not including lunch, but you really should include lunch!