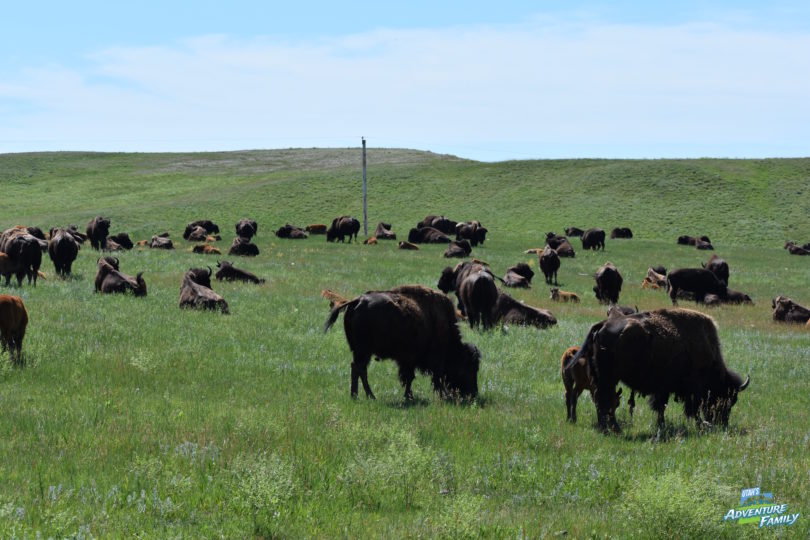 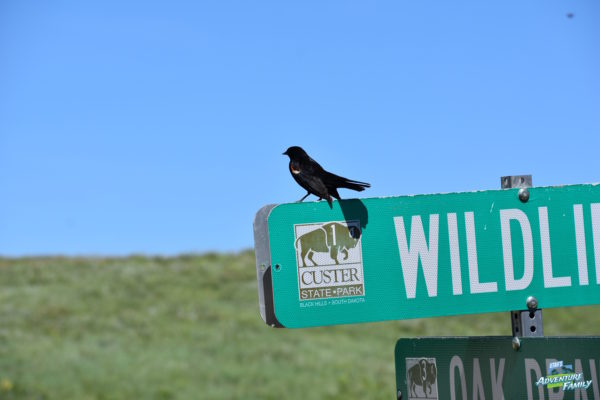 Custer State Park is a great place to spend some time on your roadtrip to South Dakota. Maybe the best thing about it is that is centrally located to Wind Cave, Mount Rushmore, Jewel Cave, and Rapid City. The park is also beautiful and offers many opportunities to camp, fish, and view wildlife.

We stayed in two different campgrounds in Custer State Park. The first was at Legion Lake. There were showers, RV hookups, plenty of grassy places for the kids to play, and a beautiful hike around the small lake. We saw blue jays right in the campground, and there were buffalo and white-tailed deer just up the road. Another night we stayed at Grace-Coolidge Campground. This site had all of the same amenities, and we enjoyed cooking hotdogs and s’mores over an open fire. There was no lake, but the site was still beautiful. 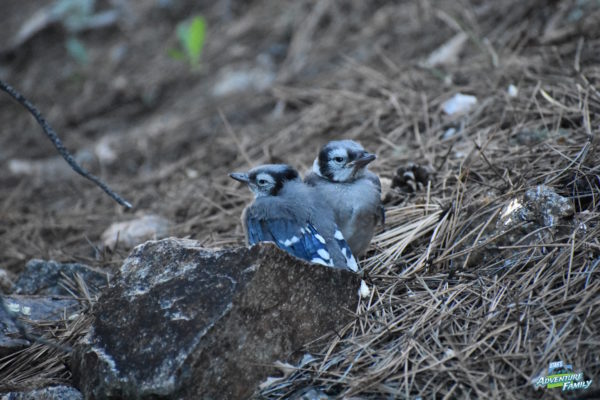 These adorable blue jays were learning to fly right near our campground.

Besides camping there is a Visitor’s Center with special educational programs for the kids. There is a full schedule of activities, and the kids can earn a Junior Ranger type badge called the Junior Naturalist for the older kids and the Pups Program for the younger ones. There are actually a few Visitor’s Centers, including one in the nearby town of Custer. 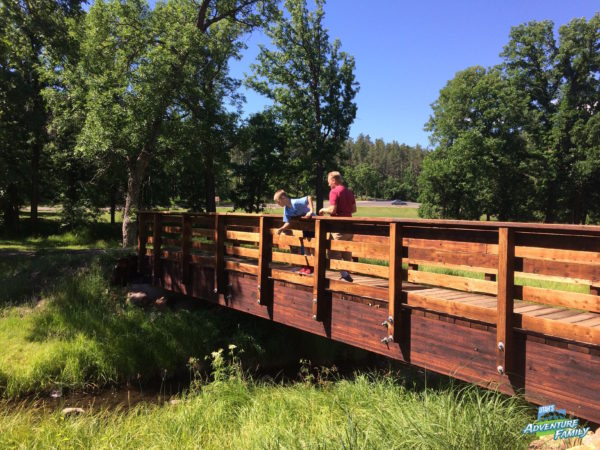 The whole park is very beautiful.

If you’re not planning on camping, you can drive through the park for animal viewing. In fact, the entire southern loop is called Wildlife Loop Road, and we saw plenty of it. There were white-tailed deer everywhere. We saw dozens of them. Large prairie dog cities with hundreds of prairie dogs were located in several places. We also saw two different flocks of wild turkeys right alongside the road. Antelope were plentiful, and when we were there in June, they had small calves with them. We even saw burros who were so friendly people were out petting them. 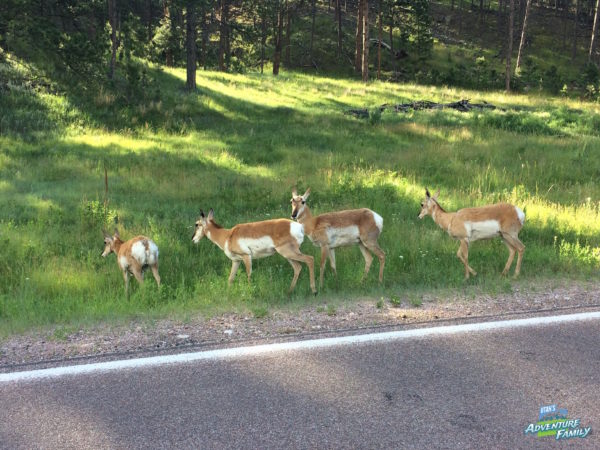 There is wildlife right on the edge of the road all through Custer State Park. 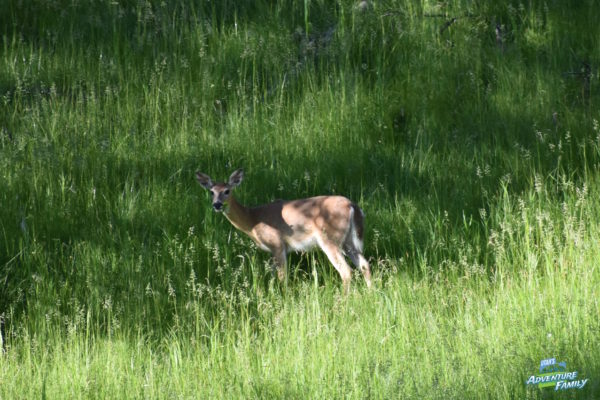 We sawlLots of white-tailed deer, which are different than the mule deer in Utah. 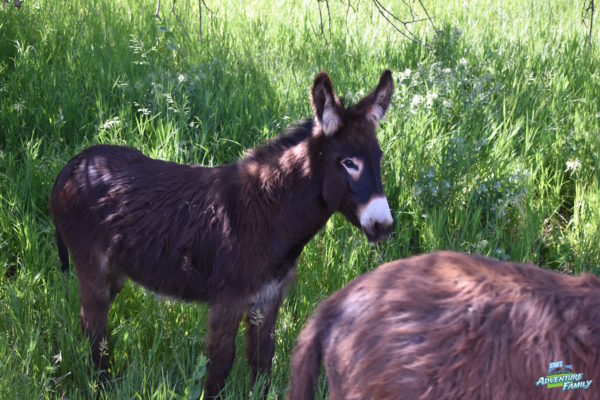 The burros were so fluffy and beautiful.

The main thing people come to see, though is the large buffalo herd. According to park literature, Custer has between 850 and 1450 buffalo at any given time. They can generally be found along the road, and we sat in two different traffic jams because the buffalo don’t really yield the right of way. We saw both large and small groups of buffalo, and we’re pretty sure that any visitors who drive the loop won’t be disappointed. There is a $20 entrance fee into the park, but it was a small price to pay for such a beautiful place to visit. 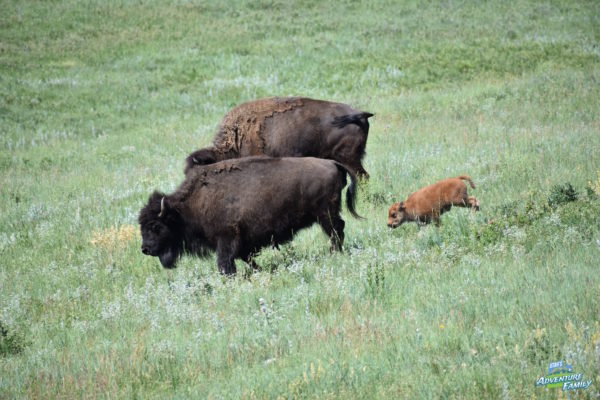 The baby buffalo are so adorable. 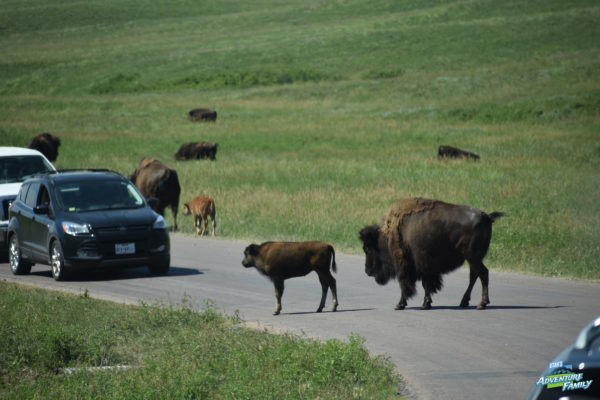 There is a lot to do in Custer State Park, and we wished we had time to spend a few days just in this park, but we were passing through and didn’t get to do everything we hoped. For more information about this amazing spot, check their website: Custer State Park.