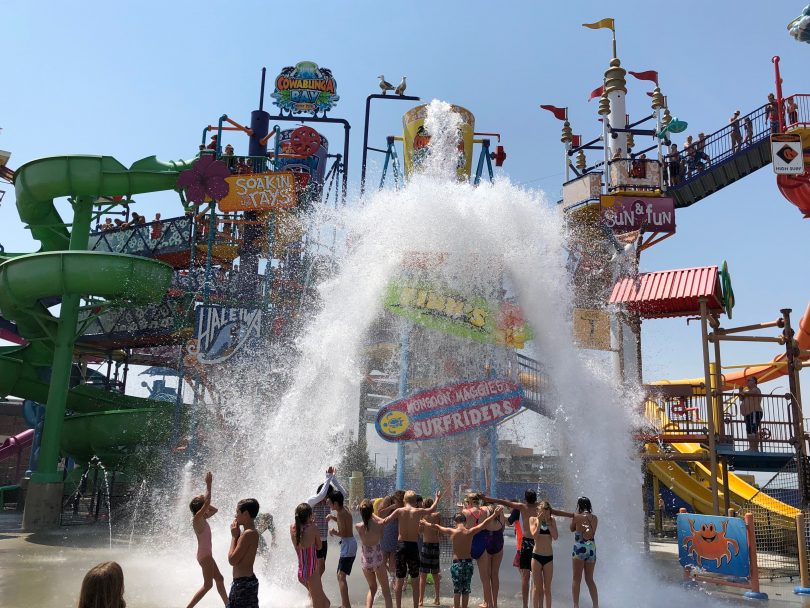 We used our Get Out Pass to visit Cowabunga Bay this week, and we had a blast! Cowabunga Bay is a waterpark located in south Salt Lake Valley that has kid friendly slides and places to swim. You can actually see the park from I-15 as you drive through Sandy. Our boys loved spending a hot day going up and down the slides and swimming in the lazy river.

There are quite a few things that we loved about Cowabunga Bay, and we want to share them with you. We also have some tips on how to make the day with your family great.

The first is that all the slides end in chutes rather than pools. This meant that even our 6 year-old could ride the biggest slides and not worry about splashing down and having to swim. If your children aren’t ready for splash pools, you’ll appreciate Cowabunga Bay.

There are also many different levels of slides. There are a few super short and small ones for younger kids, as well as some speedy, tall ones for older kids. Our boys tried them all and their ages range from 5-12.

We also enjoyed the water fight tools mounted on the stairs to each slide. This allowed us to squirt or dump water on people on the slides or coming up the stairs. But beware! What goes around comes around. As we were sliding or climbing, we were “hosed” many times. Still, this made standing in line much more bearable.

Another great thing about Cowabunga Bay was the open use of the tubes in the lazy river. Tubes aren’t used on any slides, and they can’t be rented, but are used first come first grab. Even though it was a busy day, we were able to get tubes within a few minutes of entering the lazy river. It was much better than renting tubes and then babysitting them all day like at other waterparks.

Cowabunga Bay has a small area with one waterslide for toddlers. Two other slides are also mixed in with the larger slides. In addition, there is a shallow splash pool near the lazy river. These areas are perfect for young kids.

Perhaps best of all there are two large buckets that fill with water and dump on people below. The larger one is billed as the biggest dump bucket in the world! Our boys loved standing below as it dumped over 1200 gallons of water from a dizzying height.

One good thing to know is that outside food or drink is not allowed at Cowabunga Bay. They do inspect bags, and we watched them send people back to the car who were trying to bring in snacks. So either plan on leaving for meals, or buying food at the park.

Parking is free, and there was plenty of it. Cowabunga Bay is located in Draper at 12047 South State Street.

The cost for Cowabunga Bay is $20/height 48″ and up, $16/under 48″, 2 and under free. We went using our Get Out Pass. We also saw that season passes were quite affordable if you planned to visit a few times, and bought them early with the Winter Season Sale.

We spent 3 hours playing and splashing, and our boys would have easily stayed longer if we let them. Cowabunga Bay is a blast!