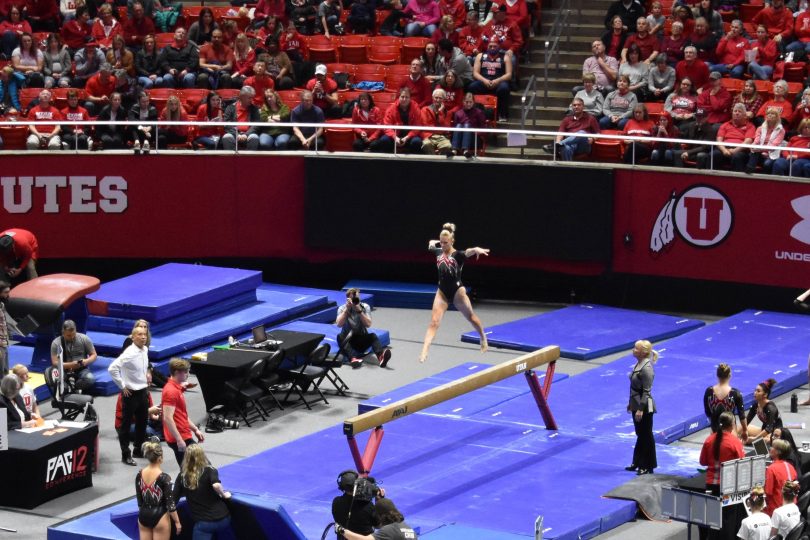 We enjoyed a BYU Gymnastics meet last year, so we thought it might be time to check out the Utes. We were surprised at the difference! The U’s gymnastic meets happen in the large Huntsman Center, and we learned that they are the number one attended college women’s sports team in the nation. They draw more fans than any basketball team!

The night we attended there was a sell-out crowd of more than 15,000! The atmosphere was electric and the fans were really appreciative of the high level of performance. The Utes are always ranked, and they compete for the National Championship nearly every year.

We were really impressed with the quality of the gymnastics. The Utes started on the vault, and their stunts were far more difficult than those of the visiting team. Nevertheless, they stuck every landing. The match was never even close. Next they moved to the uneven bars. The height of their flips, the intricacy of their dismounts, and the speed of their routines left the others in the dust.

The only mistake we saw was on the beam. One competitor fell off, but there were very few wobbles, and the team looked great. Their floor routines were amazing. They jumped so high! They even make sure to flash the symbol for the U in all of their floor routines. We love that Red Rocks’ team spirit (Red Rocks is their gymnastic team nickname)!

One thing we appreciated about University of Utah Gymnastics is that they used the jumbotron to tell what makes a good routine. We learned what moves are required and what the judges are looking for. This helped us understand a sport that we’re not too familiar with. The gymnasts also appeared on the screen asking the crowd to participate with them in part of their floor routine. We watched all the closer, trying to see if we could help them out by clapping or dancing along.

It was a really great night and we enjoyed our time at the University of Utah Gymnastics Meet. It wasn’t hard to see why the Red Rocks are considered a world-class program!