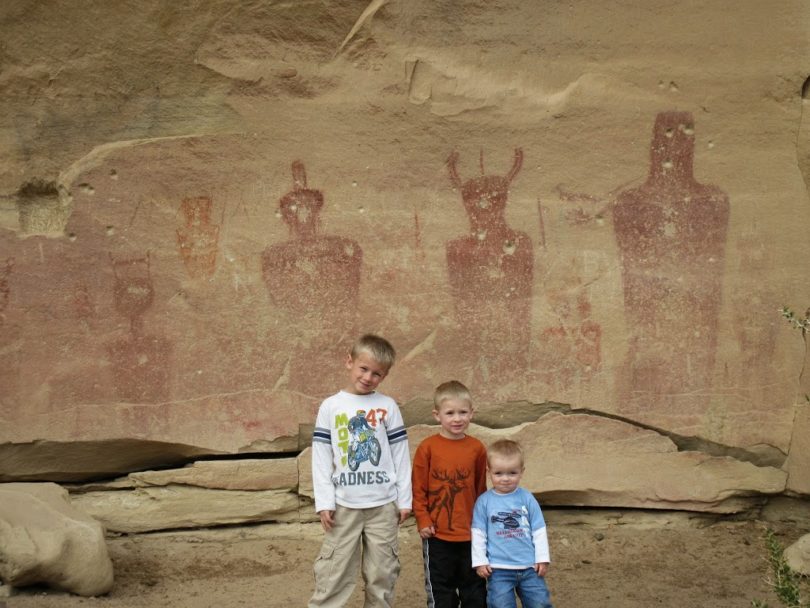 On a recent trip to Moab, we stopped in the small town of Thompson along I-70 near the Utah-Colorado border. Thompson isn’t a very wide spot in the road, but there are a few sights we went there to see: some ancient petroglyphs and an old ghost town.

Take exit 187 and go north for 3 miles. It’s impossible to get lost as this is the only road in town. After you cross the tracks, the road is well-graded gravel. Soon, you’ll see a pullout with restrooms for the petroglyphs. We did learn a thing or two from the informational signs at this stop. First, a petroglyph is something carved or etched into the rock. A pictograph is a prehistoric painting on a rock surface. Sego Canyon contains both of these types of art.

Park at the first pullout and walk up the trail a bit. There are several panels to see. Unfortunately, these panels have been largely defaced by vandals, as they are not well protected. Still, this art is thousands of years old, and the pictures are impressive.

Drive up the road a little further and you’ll come to a second panel. This petrograph sits right on the ground, and our boys posed for a picture in front of it. Again, some defacing has taken place. There is even an inscription here from 1889, so the vandals aren’t necessarily teenage punks.

Another thing we learned was about the relative age of panels. The Ute Indian drawings are the newest, taking place sometime after 1300 AD. Fremont or Anasazi rock art comes between 1 AD and 1300 AD and is considered “Prehistoric” as there is no recorded history for these folks (the Utes have a long and detailed history). The oldest, made in the BC years, are referred to as Archaic, or sometimes Barrier Canyon, after a specific famous site. Once you see the difference, it’s easy to pick out the styles. Sego Canyon is extremely rare as it features rock art from all three eras (as well as pioneer graffiti).

If you’re traveling I-70 and would like to get out of the car for a stretch, take the 30 minutes it takes to see the Sego Canyon rock art. You can also see the ghost town of Sego just up the road another mile while you’re here.