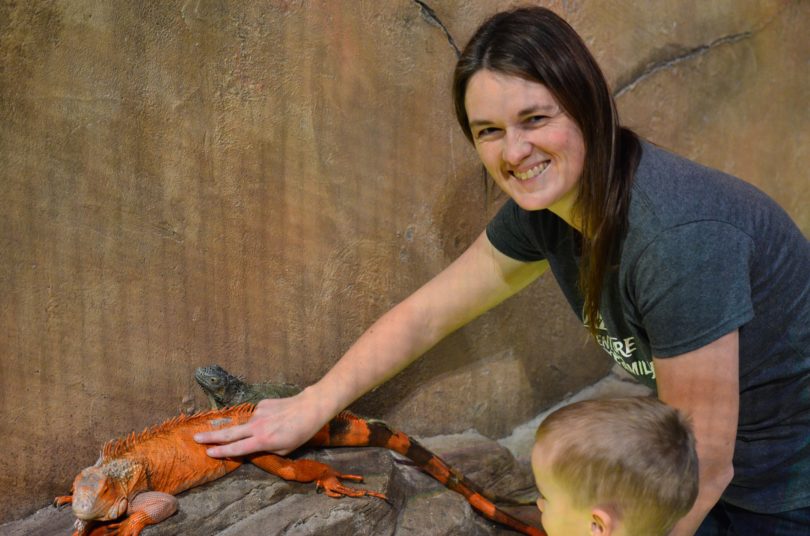 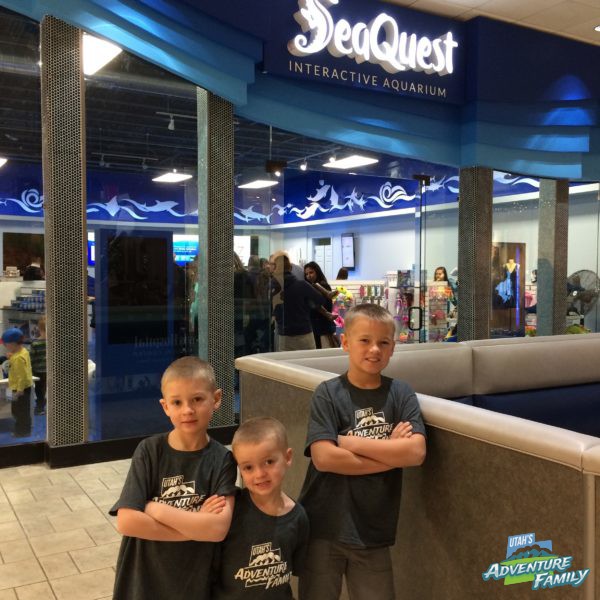 We went to the SeaQuest Interactive Aquarium in the Layton Hills Mall today, and it was amazing! Our boys loved being right up close with the animals, almost all of which cooperated with us!

The aquarium is right below the food court in the mall, and it is quite large. Make sure you buy some tokens, which run about $2 each depending on how many you buy. These tokens are used to purchase food for the animals, which is the best part of the museum.

As you go in to the first room, there are several tanks. During our 2 hours at the museum, they had a huge python and a really fat lizard on display in this room. You were allowed to gently touch or even hold them at the staff’s discretion. There is also a small side room that is caged in. This room is full of iguanas and you can spend a token to feed them pieces of lettuce. There are over 20 iguanas in the room, and visitors are allowed inside in small groups. The iguanas, including one that is as long as your arm, eat the lettuce right out of your hand. This is the first of about 6 interactive rooms in the museum. 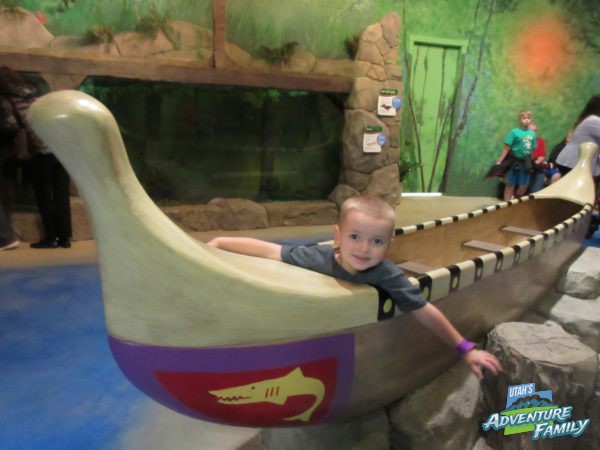 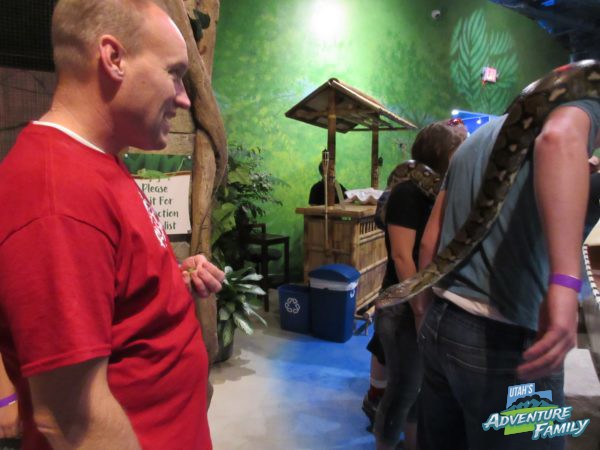 This snake was so cool. It kept trying to touch us. They handlers let people hold it, and touch it, and even wear it. 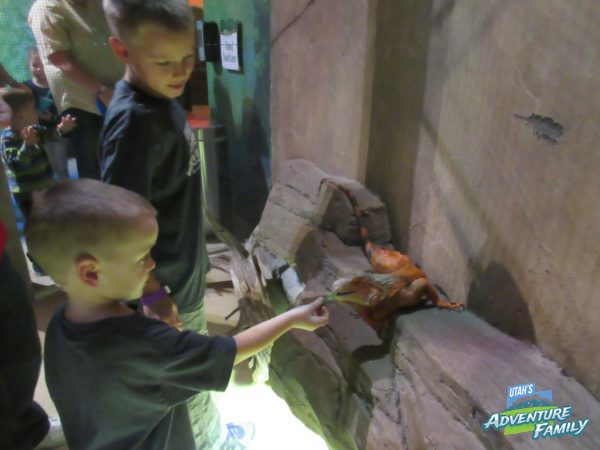 My boys thought feeding the lizards was amazing! 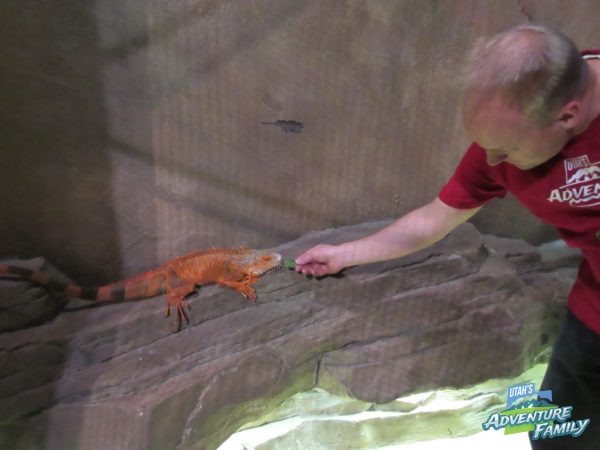 There were about 20 iguanas in the enclosure, but we liked this guy a lot!

The next corridor has brightly colored fishtanks. There are about a half dozen tanks with all kinds of different fish, as well as jellies, crabs, and lobsters. As you continue you on, you see more snakes, and you can even pat a turtle on the carapace. 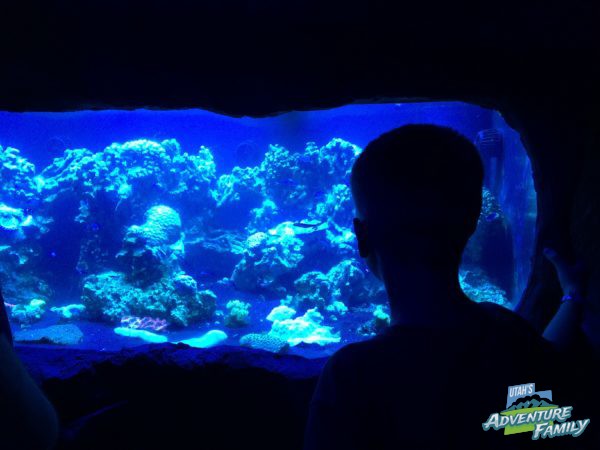 It was fun looking in all the tanks to see fish or frogs. 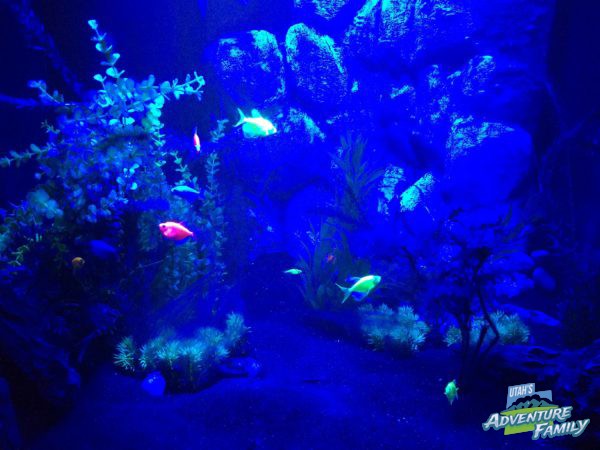 These are glowfish and they really looked like they were glowing because they were so flourescent. 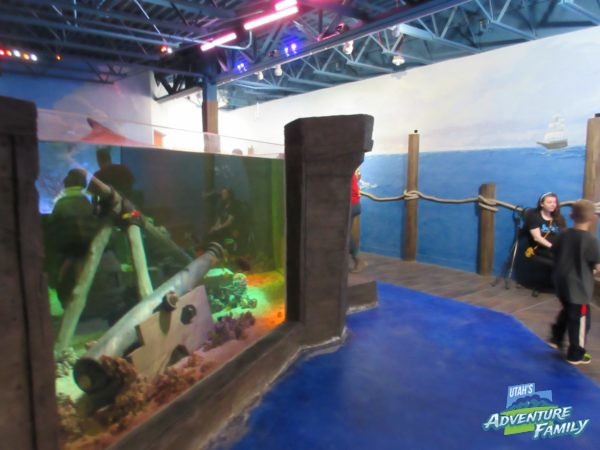 Most of the areas are open so lots of people could fit inside if needed. We didn’t feel like it was overly crowded, but it was busy. 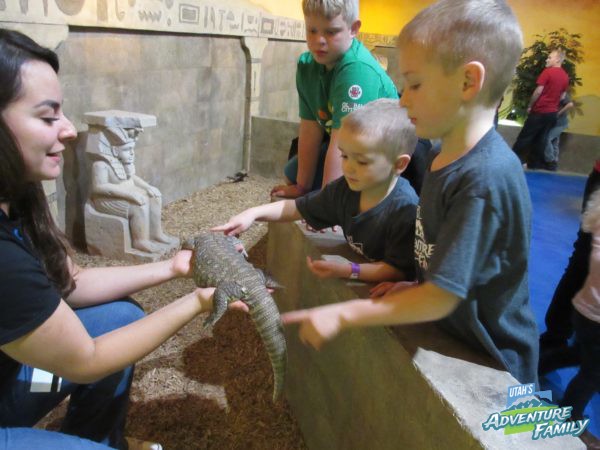 There were handlers showing off different animals. This lizards skin is actually very soft. Super surprising.

Next there are two large bird cages, and you can buy food and go in to feed them. There is a parakeet cage with blue and yellow birds that fly right over to you to eat the seeds out of the your cup (don’t worry that the cup only has a few seeds. We were in the enclosure for around 5 minutes, which seemed just the right amount of time.) Our boys were a little edgy about the birds landing right on their arms and heads, but they got used to it pretty quickly. 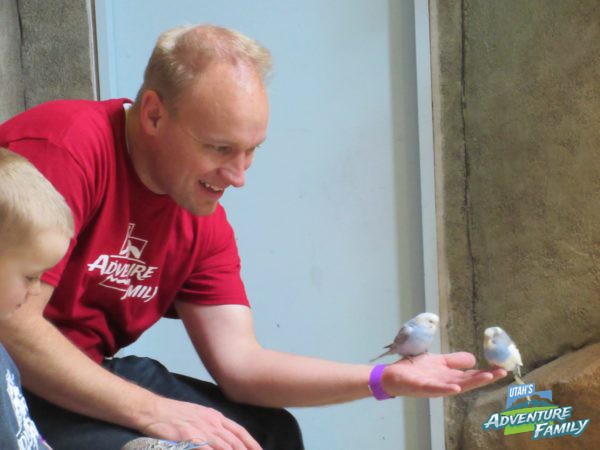 We loved the bird cages! It was fun to be close to the creatures. 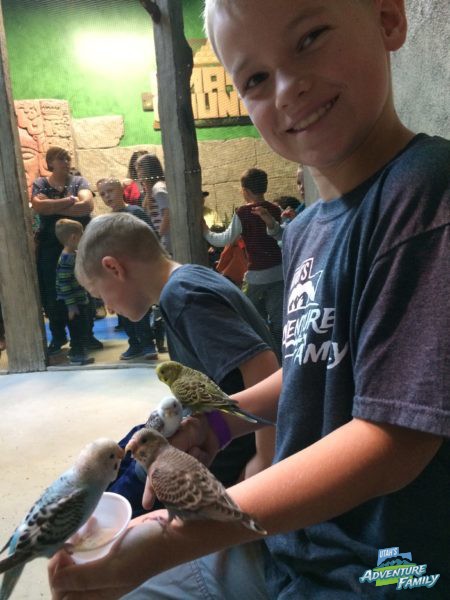 Our kids thought it was seriously cool!

Next door are larger rainbow lorikeets, which use their tongues to lap up a little juice from the bottom of the cup. There aren’t nearly so many birds, but they still land right on you and stay until the food is gone. You’ll spend about 5 minutes with these birds as well. 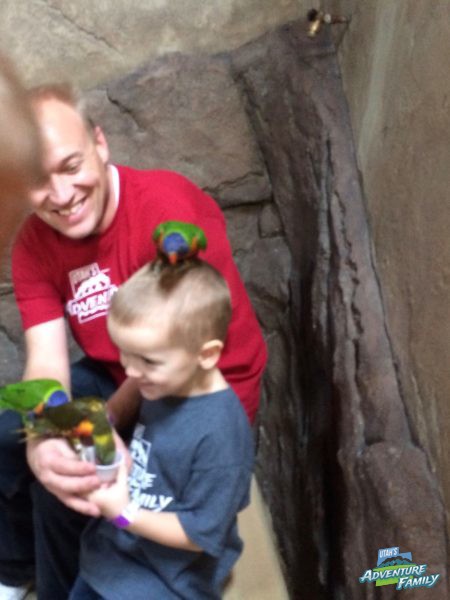 I wasn’t quite fast enough to get a clear picture but we had barely walked into the cage when this one landed on our little one’s head. 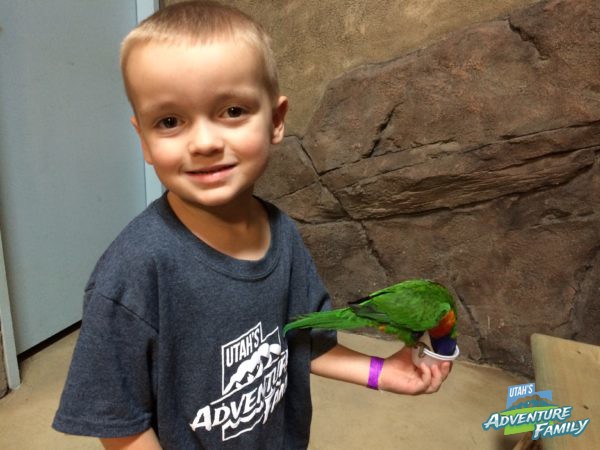 The lorikeets were beautiful and very friendly.

Next there is a larger tank full of trout, and you might be tempted to save your token and not feed them, but they turned out to be our boys’ favorite. We bought just one cup of food and split it out. As the boys dropped it into the tank, the fish zipped up to snatch it, splashing anyone standing next to the tank! All of us thought this was amazingly hilarious, so don’t skip feeding the trout. 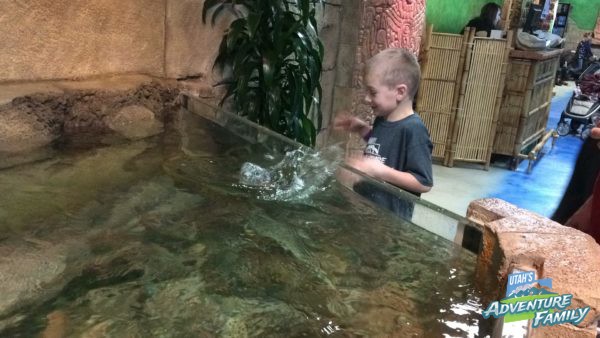 The trout were jumping like crazy. We all ended up a little bit wet. 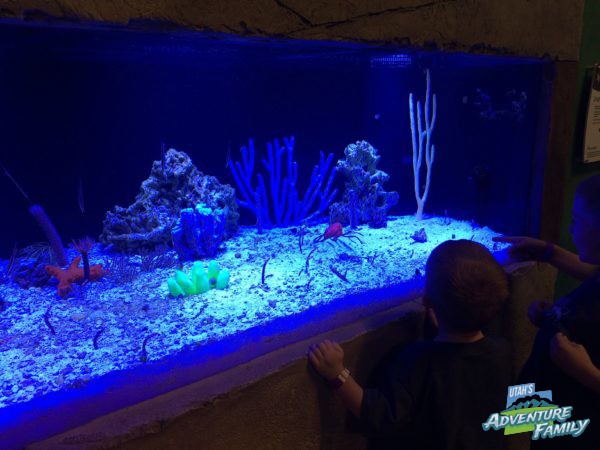 In between the bigger exhibits there are little tanks to see fish or other animals in. The aquarium has tons to see.

The biggest tank is in the next room. It is full of all kinds of rays. You are can stand on the steps and touch them, and you can even exchange a token for some krill. They come right up out of the water and suck the krill out of your hand with an audible slurp. When we were there, we saw mermaids swimming in this pool as well. They even swam right over to the edge to talk to us. Our boys weren’t really impressed, but all the little girls seemed to be. 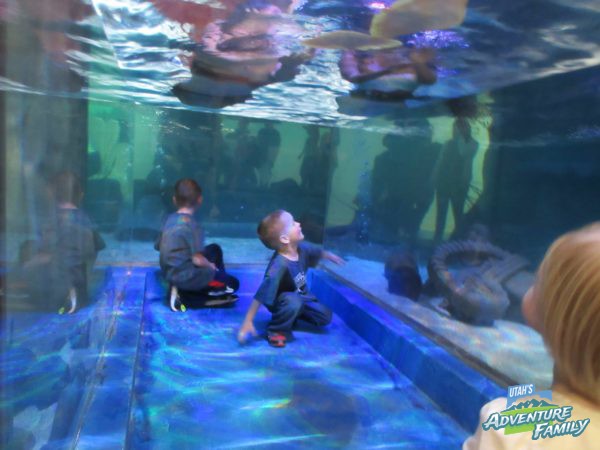 There is a small tunnel underneath the stingray area. The mermaids were lounging on top when we stopped by. 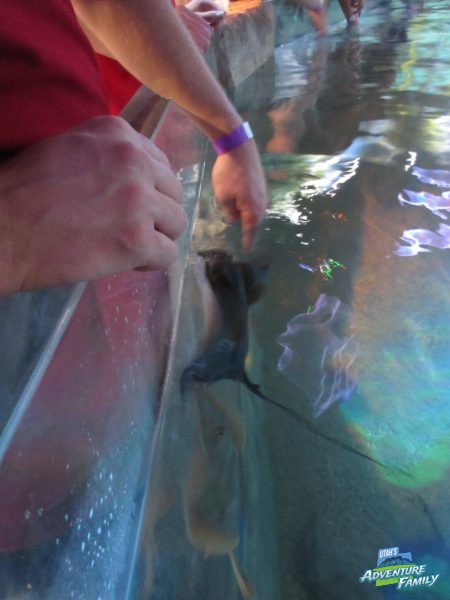 The sting rays were very friendly and let lots of people touch them. 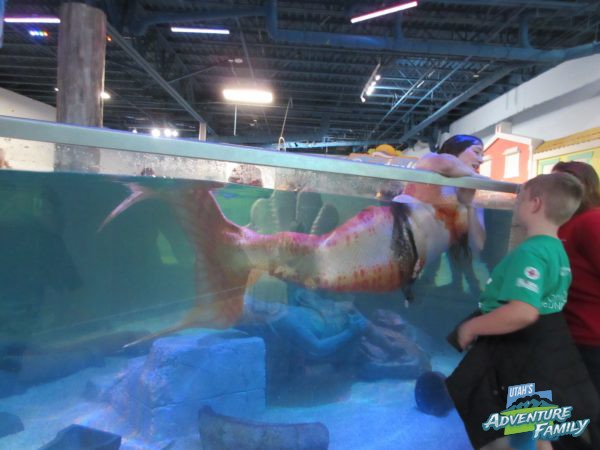 There were a few different mermaids swimming in the tank. There was also one sitting outside to take pictures with. 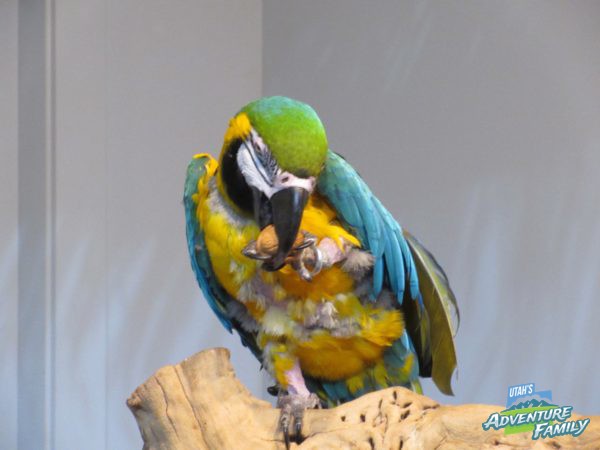 They had a small stage area where they show different animals. When we were there a macaw was demonstrating his beak strength by cracking a nut open.

In this same room you can dip your feet in the fish spa. This costs quite a few tokens, so we watched as Dad’s sister (who runs the blog Twelve Makes a Dozen about her 12 kids!) took a spa. She sat and put her feet in the water. Then tiny fish swam all around her legs to nibble off the bits of dead skin. She sat there for fifteen minutes, which cost her 6 tokens. She did say her feet felt softer so it was worth it. You can read more about the fish spa on her blog.

In the final room, we tried to feed the sharks. I say tried because the sharks just weren’t biting. We held a tiny silver fish in the tank for over 10 minutes, but we found out that they usually get tired of eating late in the day, so this may be a good morning activity.

The sharks weren’t interested in our food, but we still had fun watching them swim around.

You can visit the SeaQuest Interactive Aquarium and look at the animals without spending extra money on tokens. But, we feel that the highlight of this aquarium is the time that you get to spend with the animals. So the tokens are an extra cost, but definitely worth that interactive part of the aquarium.


We had so much fun at the interactive aquarium, and we can’t wait to go back! SeaQuest Interactive Aquarium costs $10/child and $15/adult. The price of the tokens depends on the number you buy, but they are around $2/token. The aquarium is open 10 am – 9 pm Monday through Saturday, and 12-6 pm on Sunday. The Layton Hills Mall is located off the Hill Field Road exit in Layton. SeaQuest Interactive Aquarium is located on the north side of the mall on the lower level underneath the food court. We parked by the food court, and took the escalator down to the aquarium. The mall play area is in front of the aquarium.

Be sure to check out our SeaQuest Aquarium Tips for Families. We share what to bring (and not bring), and how many tokens you should purchase.