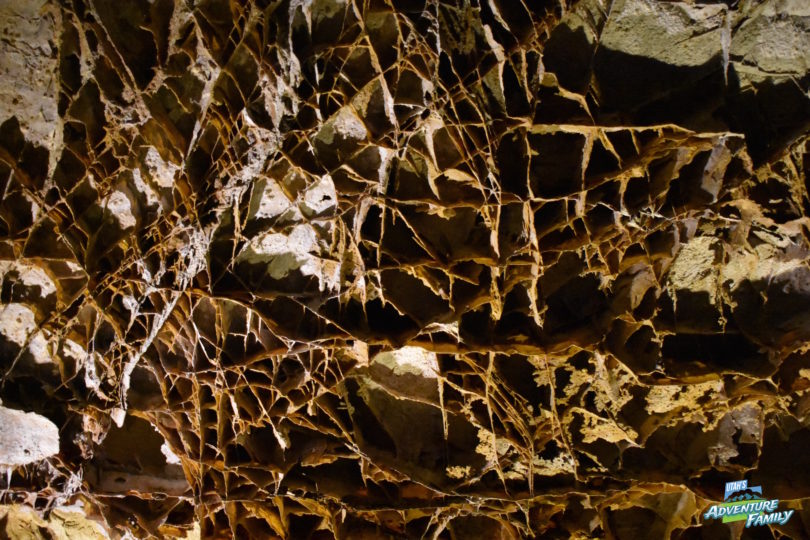 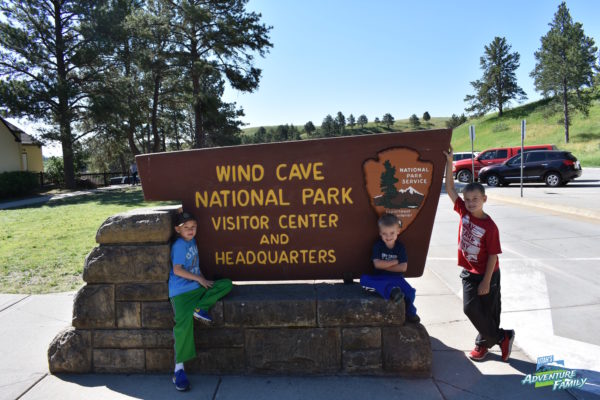 We took a road trip to South Dakota, and while we were there, we stopped at Wind Cave National Park. We’d visited Jewel Cave National Monument the day before, and though we’d heard a lot of comparisons between the two, our group liked Wind Cave much better. We all agreed, though, that the ranger who guides your tour makes a major difference, and we loved our ranger at Wind Cave.

Surprisingly, Wind Cave has quite a bit to do, and you could easily spend a day and a half there, though we were there for just one morning. First, there are quite a few animals to see. There is a large prairie dog city that is worth the short drive from the Visitor’s Center. We also spotted several buffalo along the road on the way into the park. There were white-tailed deer munching on the prairie grass, and we saw several squirrels and chipmunks, too.

There are also hiking trails at Wind Cave. We did the Prairie Vista Trail, which walks past the tiny natural entrance to the cave and up the hill. It walks in a loop across the prairie grasses, and we saw wildflowers, butterflies and caterpillars, and a few deer along the way. There are other trails, too, and even picnic and camping sites in the park boundaries. 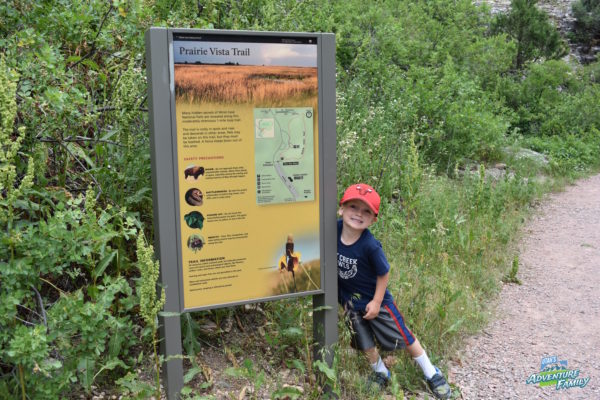 The Prairie Vista trail was a nice stroll across the prairie. 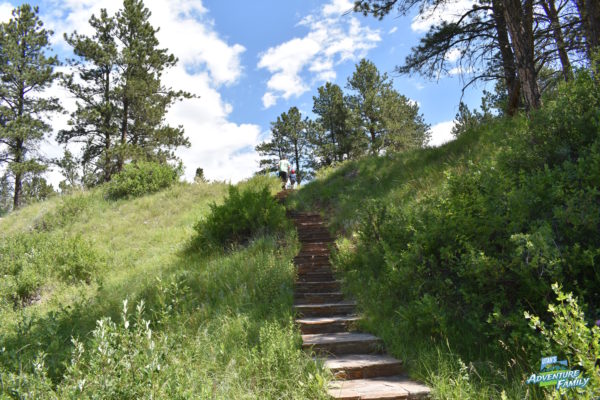 We did have to climb these stairs up to the trail. 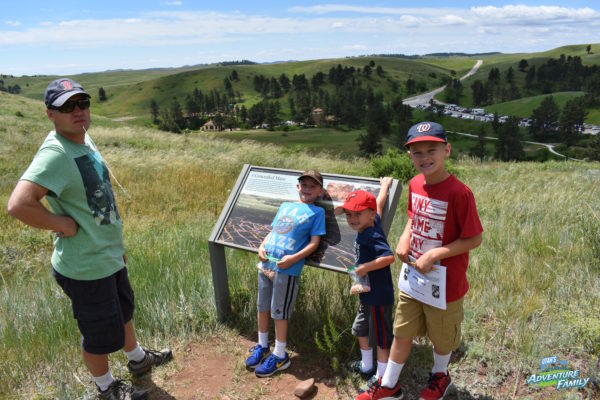 There were some interpretive signs along the way. 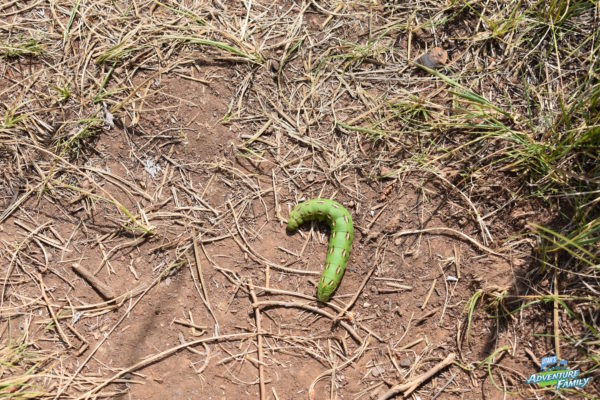 We saw this cool caterpillar. 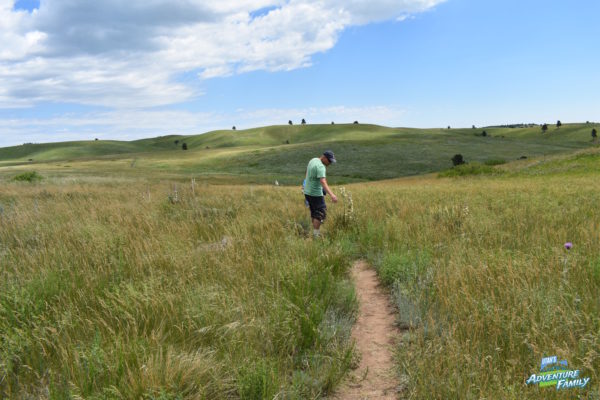 The prairie is beautiful! 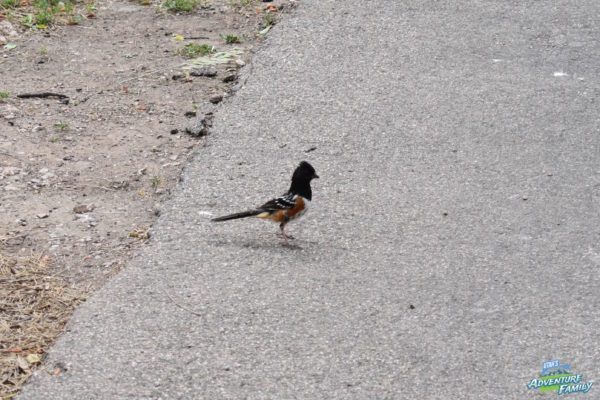 We also spotted this Towhee hopping around. 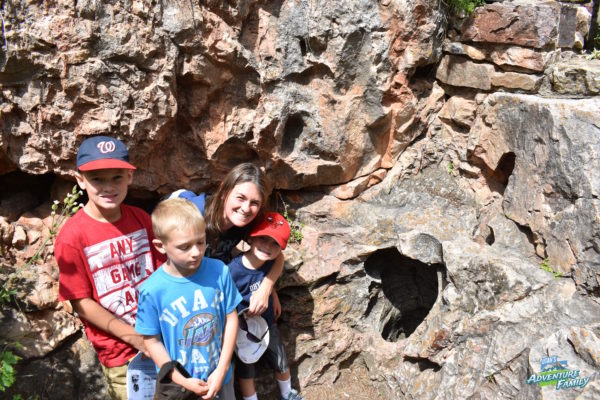 And the trail circles past the Natural Entrance which isn’t very big and Mom can’t imagine why anyone would squeeze in there.

Obviously, the cave tours are the main attraction. The reason you could spend all day at Wind Cave is because there are four different tours and none of them overlap. For beginners, there is the Garden of Eden Tour. This one is short, relatively flat, and takes you to many beautiful cave features. We did the intermediate tour, which is an hour and fifteen minutes and requires walking down 300 stairs (an elevator brings you back up). The overall tour was just over a mile, and the ground is paved, but the steps are steep and some of the trail is a bit uneven. We had Grandma do this one, and she was huffing and puffing, but she made it the whole way. The advanced trail has 450 stairs and some of them go up. It takes an hour and a half. The amazing thing is, you could do all three tours and not see any overlap! For serious cavers, there are lamp tours and “wild tours,” which may require crawling and special equipment. 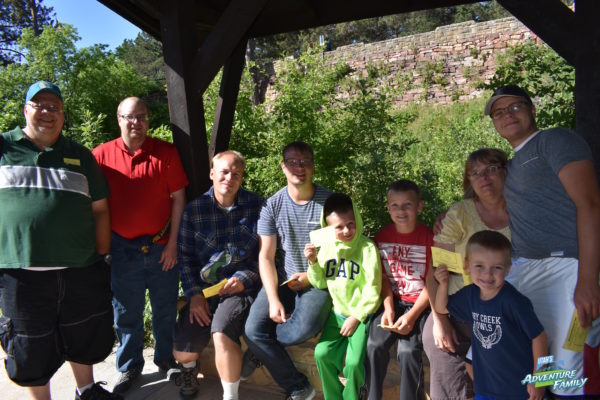 This is our family getting ready for the cave tour. You meet outside the visitor center and you must have a ticket.

We liked our tour, called the Natural Entrance Tour because it focused primarily on the history of the cave. (The advanced tour talks more about the geology, according to a ranger.) The Natural Entrance to the cave is actually amazing. It is no more than 15 inches in diameter, and we don’t know too many adults that would make it through! It also constantly blows wind. This wind blows in or out depending on the barometric pressure and can actually be used to predict storms! The cave itself is narrow and windy with a few large caverns, much like Timpanogos Cave. The ceilings were mostly low, and there were hundreds of dark winding passages leading off in all directions. One surprising thing about Wind Cave is that there isn’t much water and not many of the usual cave features. Instead, there is a really cool formation called Box Work. Our ranger did a nice job describing this rare, delicate feature. Imagine a rock and mortar fireplace and all the rock gets dissolved. The lacy, fine “mortar” that is left is like the box work. According to park literature, Wind Cave contains 90% of the box work in the world. 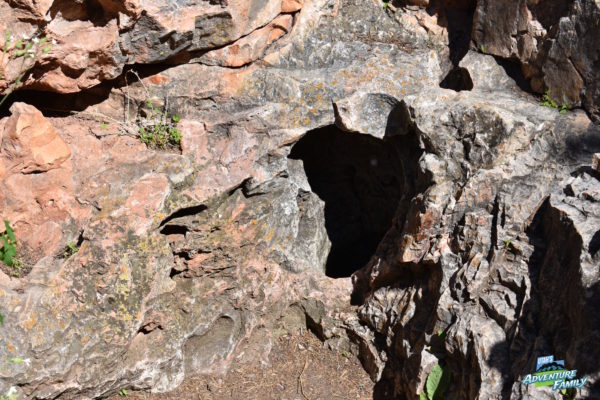 This is the entrance to the cave. Would you go in that tiny hole in the rock? 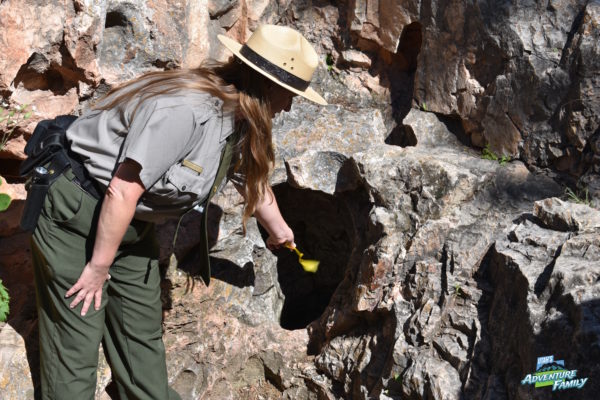 The Wind was blowing in the day we were there, which indicated high pressure weather. 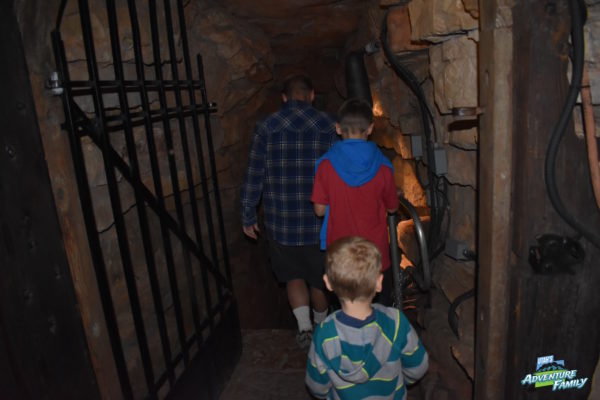 You don’t actually have to enter through that tiny hole. You go through a normal door. 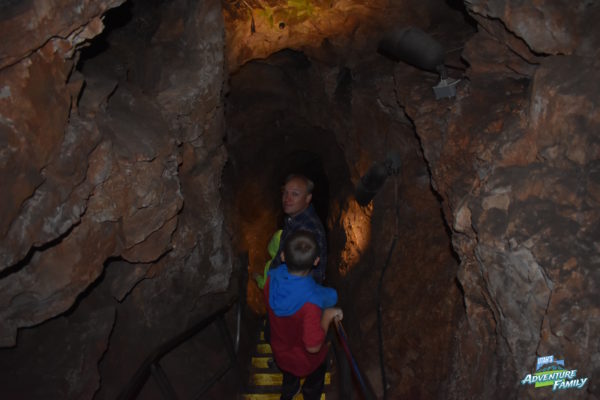 And you do walk down a lot of stairs, but at least you don’t have to come back up the stairs. 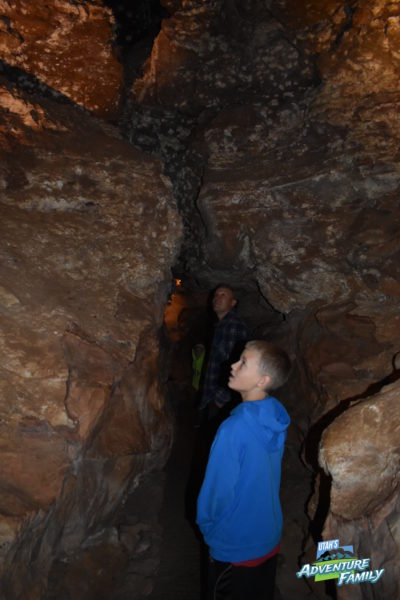 The path is winding and narrow. There are not too many big open spaces in Wind Cave. 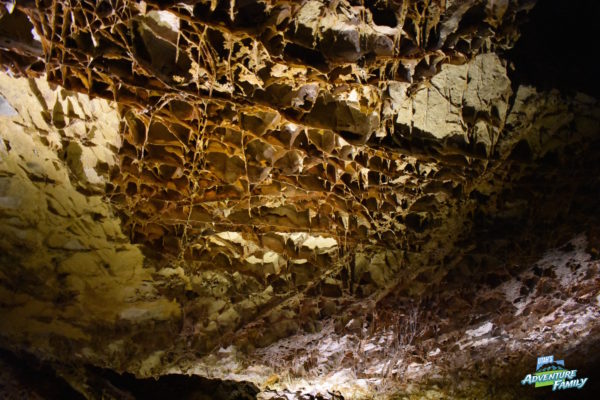 The box work is what Wind Cave is known for, and it is neat to see. 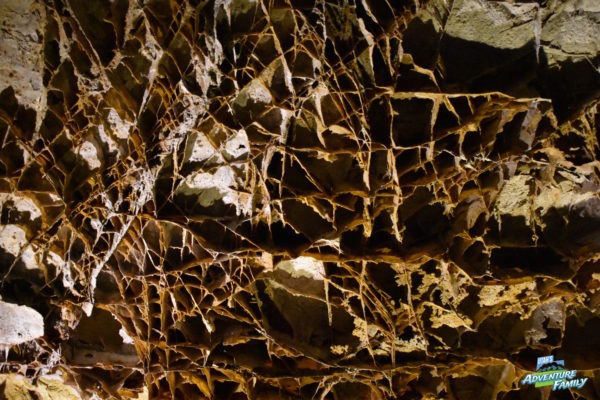 It is completely different than any other cave feature that we have seen in all the caves we have been in. 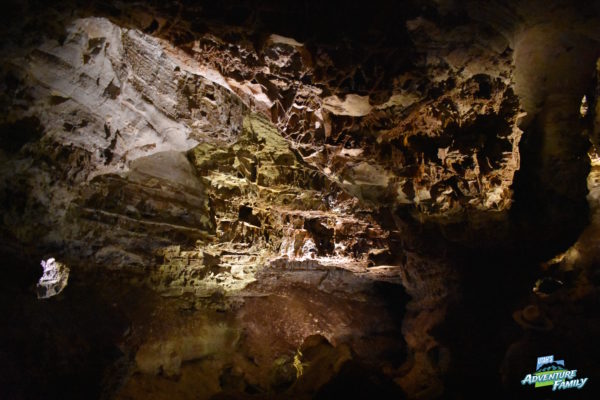 The box work is all over! 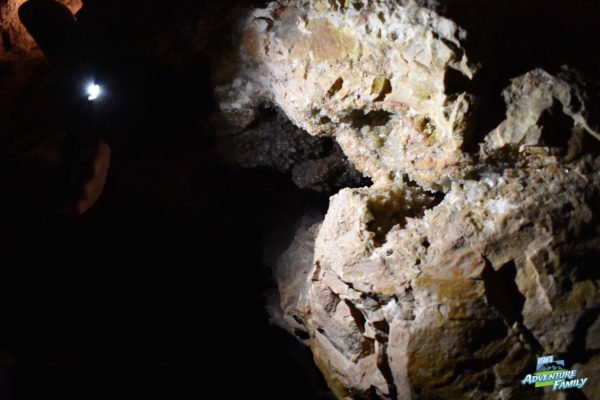 There were a few jewels here like the jewels in Jewel Cave National Monument. 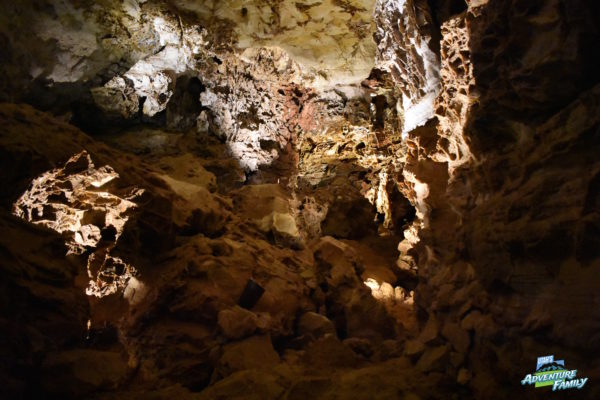 This is one of the bigger open areas in the cave. 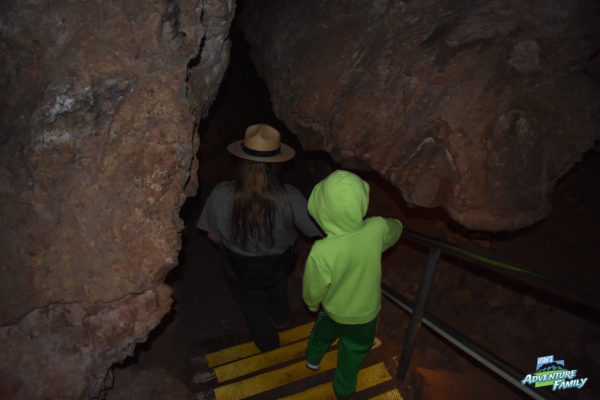 Remember that we mentioned how great out ranger was? Well, she gave each of our boys a job. Our 8 year-old was the leader and she told him exactly where to stop and wait for her in the next place. 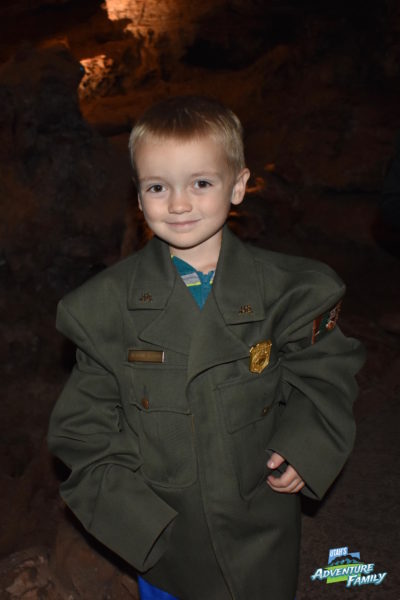 She even let our 5 year-old wear her jacket because he wants to be a ranger one day!

The last thing to know is that cave tours have a limited capacity. You can’t get tickets in advance of your tour, so you have to buy them the day of. We arrived at the cave at 8 am and a line was already forming. The tours here are bigger than at Jewel Cave, so we probably needn’t have worried, but you probably won’t be able to show up at 2 pm and grab the next tour. Make sure to plan for this! We loved Wind Cave National Park. Our boys did the Junior Ranger program that they printed out online. We would gladly come back to try a different tour another time. This is another great National Park. 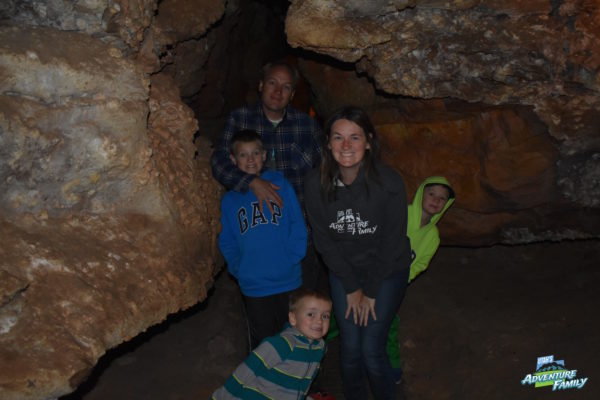 We had a great time inside Wind Cave National Park.