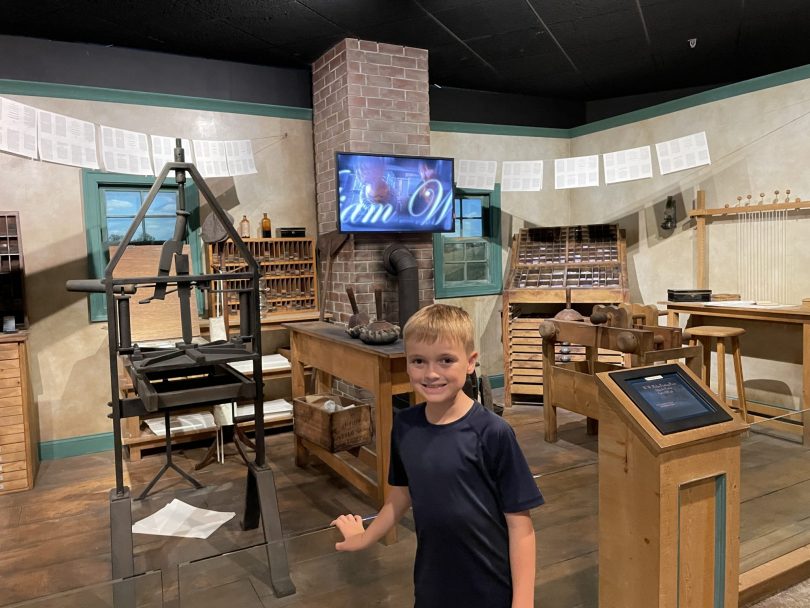 The Independence Visitor Center of the Church of Jesus Christ of Latter Day Saints commerates the time the Saints spent in this area before being forced to move out of Missouri. The Visitor Center is quite large, and takes around an hour to visit.

When you visit Independence, you’ll be greeted by missionaries that will take you on a tour of the museum. They start at a large statue called a Christus, which is a statue of the resurrected Christ with his hands stretched out.

From that point, you are taken downstairs and shown what life was like in Independence, Missouri, in the 1830’s. There are several audio presentationz, and the missionaries walk you through with a small group. Our boys enjoyed being inside the old cabin that has windows that change like the seasons.

The next room at the Independence Visitor Center is a printing shop, which is depicted because of several famous incidents that happened in Independence. You’ll hear the story of the saving of the Book of Commandments and the tar and feathering of Edward Partridge. There are also some short video clips and testimonies by the missionaries at the end of the tour.

After the tour is over, there are a few other self-guided displays. The one we liked best had scenes from the Book of Mormon. In the middle of this room, there were dozens of copies of the Book in different languages. Our boys spent a fair amount of time looking at these books and deciding where each language was spoken.

There is also a small child’s play area at the Independence Visitor Center. This room has some hands-on activities for kids such as roping, drawing water from the well, driving a wagon, and more. We spent a little bit of time playing before heading upstairs to view the final displays.

We enjoyed learning more about the Saints and their time in Missouri at the Independence Visitor Center. Check out their current hours on their website. Visits are free of charge. To read about other adventures on our Church History Trip, use this link. Make sure to visit Liberty Jail if you are in the area. It is just a few minutes away.