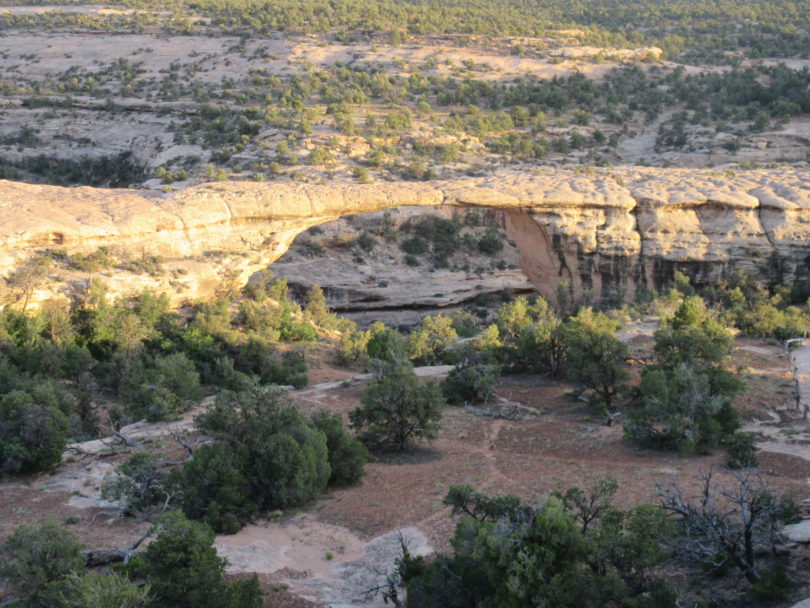 Natural Bridges National Monument is an amazing place in southeastern Utah, but it is not visited very often. This park was the first National Monument in Utah (1908), AND the first International Dark Sky Park in the world (2007). We found a lot of great adventures for families including: three beautiful Natural Bridges, an Anasazi ruin, a small Visitor’s Center, the Junior Ranger Program, and a Night Sky Program.

Natural Bridges National Monument has one road that loops around, and all the hikes start from there. Bridge View Drive is 9 miles around. Start at the Visitor Center and pick up the Junior Ranger booklet, so your kids can work on it as you adventure through the park. Or you can print it beforehand and work on the booklet on the drive down to Natural Bridges.

After you pass the Visitor’s Center, you’ll come to the first bridge, which is called Sipapu. This name refers to the opening in the world where the first ancestral people came out.

You can hike down underneath Sipapu Bridge, which is, like nearly all the hikes here, a bit steep. It is a little over a half mile down to the bottom (.6 miles), but we didn’t go all the way since we had pretty young children. This is because you don’t have to stand right under the bridge, there is a much better view from a wide stone ledge, which stands right in front of the opening.

As you hike down to the bridge, you’ll climb down some metal stairs and one short, rickety ladder. Then the trail turns back under the overhanging cliff face. The trail will continue along the face and then the trail splits. Down and to the right goes under the bridge. Straight along the ledge brings the bridge right in front of you. This is where we stopped. If you choose to hike to the ledge, Sipapu is a hike you should do with your family.

The next stop around the loop is the Horse Collar Ruin Overlook. This hike is not steep, as it follows the canyon rim around to an overlook of a nice ruin. If you have binoculars, you’ll want to take them as the ruin will be around 100 yards away from the view area. The hike is only .7 miles RT. The ruin gets its name from the horse collar shaped windows that seem to be unique for Anasazi sites. This is an easy hike for anyone.

A little further around the loop, you’ll find the most difficult hike at Kachina Bridge. It is .75 miles each way (1.5 miles RT) and it is fairly steep. We only walked down to the overlook on this one, which is handicapped accessible, as we felt that 4 consecutive hikes for our little ones would be too much.

The final bridge is called Owachomo. The hike is .2 miles down, which makes it less than a half mile round trip. You can stand right under the bridge, and the hike is less steep than either of the other two bridges. This is the must-do hike in the park and it is very accessible for anyone in reasonable health.

Natural Bridges National Monument is also a Dark Sky park (the world’s first International Dark Sky Park). This is a special designation that means that it is far away from any light pollution.

This park holds astronomy programs regularly in the summer months that are quite popular. We stayed for a program which started at 9:30, and there were around 20 people, mostly from the campground in the park.

They brought out a huge telescope and focused it on each of the visible planets: Mars, Jupiter, and Saturn, as well as the full moon (which washed out any good deep sky objects). Of course, the moon was beautiful, but the highlight was Saturn with it’s perfect rings. You could even see the black line known as the Cassini division separating the inner and outer rings.

Even if there is no program going on, we highly recommend staying until dark if possible. The stars here are truly amazing in such a dark part of the state.

We spent most of a day at Natural Bridges National Monument. It was a great stop in southern Utah that is mostly overlooked. If you’re tired of the tourists, go off the beaten path and try it!

For current information, visit the Natural Bridge website. We stayed in Blanding when visiting Natural Bridges, which is about 45 minutes away. We found Blanding to be a great jumping off point for many adventures in the area. Check out our list of Things to do Near Blanding.

There is one campground in the park with 13 sites, vault toilets, and no running water or electricity. The sites are first come, first served. There is a water spigot at the Visitor Center.