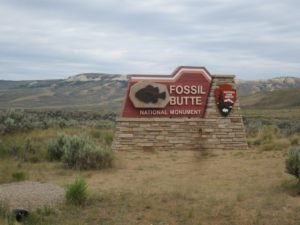 Today we took a day trip to Fossil Butte National Monument near Kemmerer, Wyoming. We found out that there is no fee at this monument– it is free.  The drive from Utah Valley is around two and a half hours, so we paired our trip to the monument with a visit to Fort Bridger State Park.

Our kids love fossils and dinosaurs, so Fossil Butte seemed like a natural destination. You won’t find any t-rexes or -sauruses of any kind at this fossil destination, though. Fossil Butte was a prehistoric lake 20 miles wide and 50 miles long, so the fossils include plants, fish, and other lake dwellers.

The monument has a really nice museum that we spent a lot of time exploring. The boys did the Junior Ranger program, but there were other hands-on activities as well. We enjoyed watching the rangers work on a fossil. He had a fish in a layer of rock and he was using a tiny etching tool to blast away the sandstone and expose the fish skeleton. All three boys were entranced by this, but not quite as much as mom and dad were.

The boys did like making etchings, though. There was a small station with paper, crayons, stamps, and outlines of fish and other fossils. The boys lay the paper over the outlines and ran a crayon over the paper. Then they stamped around the edges and made really cool etchings.

Aside from the Visitor’s Center, there are three hikes. We tried a hike called Chicken Creek Quarry. It was pretty steep, but our four-year old made it all the way to the top. At the quarry, they are peeling back layers of rock and labeling fish. This quarry was active until the sequester. Now a volunteer will explain things to you and show you what’s been done without actually doing any actual quarrying.

The other thing that was really interesting about this hike was the terrain. It is only 1 mile, and it starts in the sagebrush. As it winds up the hillside, it goes in and out of the aspens, too. We saw several mule deer, two types of woodpeckers, and some green-tailed towhees. It’s sort of indescribable how you go from the desert sagebrush into the high-mountail forest in 50 yards and then back out to the desert 50 yards later. We’d never seen anything like it. This alone made the hike worthwhile.

We really enjoyed Fossil Butte National Monument. It was a bit of a drive from Utah Valley, but it was a unique place that we’d never heard of before!
Tags: Dinosaurs, Wyoming