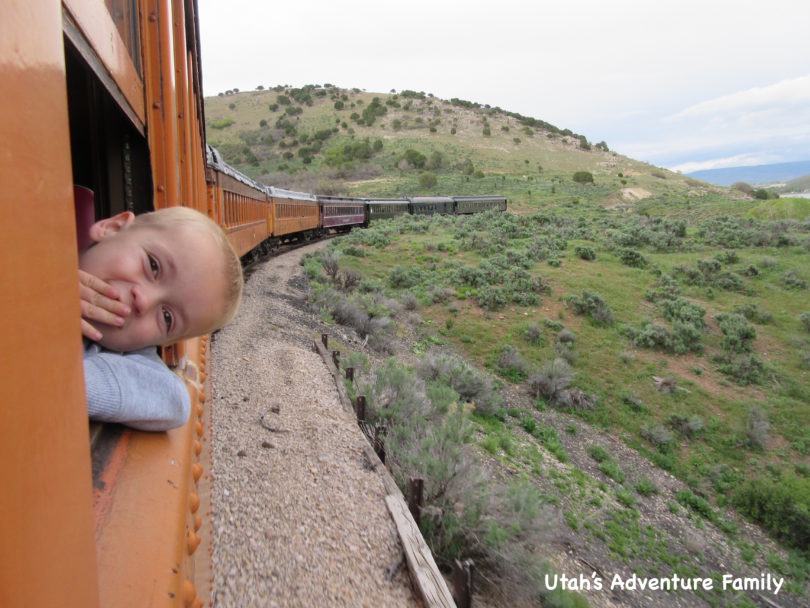 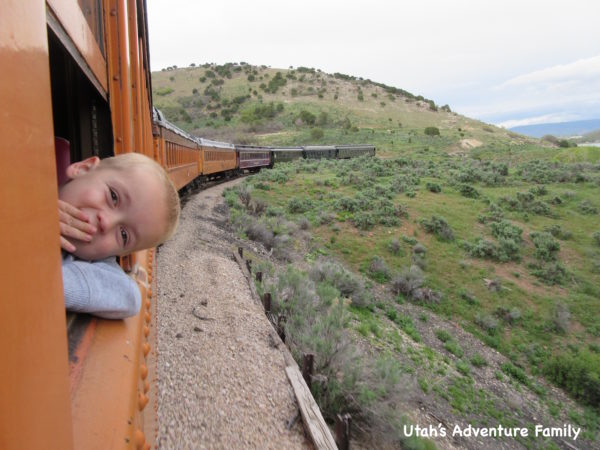 We had an amazing time Monday night aboard the Heber Valley Railroad which is often affectionately called, The Heber Creeper. Dad had been on this train as a little kid, and didn’t have the greatest attitude about going. Frankly, all those years ago, the train was a little boring.

But now the train is much more exciting! We were told to arrive for our train ride 30 minutes early. We figured that this was due to Utah Standard Time meaning they were expecting latecomers. We didn’t know that there would be a gunfight before we boarded the train! 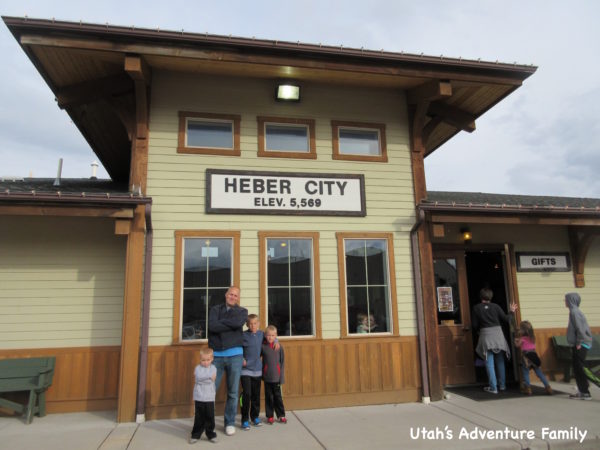 Here’s the train station where you check in or buy tickets. 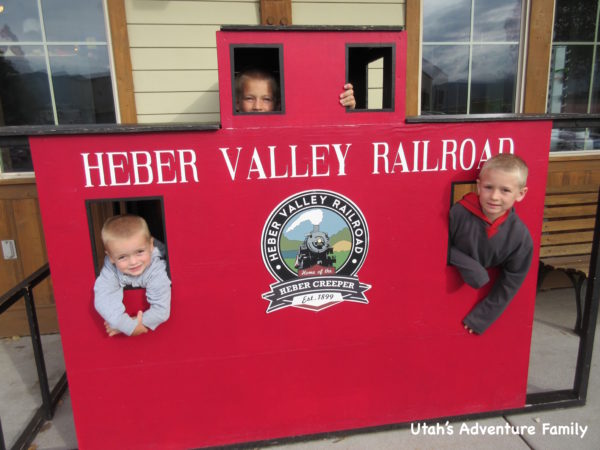 There’s a little train outside to take a few pictures by. 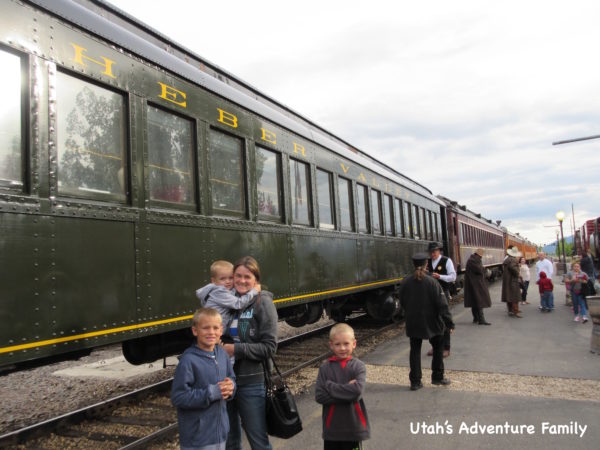 We also had a few minutes to take pictures by the train before the show started.

The gunfight took about 10 minutes and featured a Marshall and his deputy against two robbers. The show was really fun because the actors were highly interactive and the script was funny. (I don’t want to spoil too much, but the sheriff searched the bad guy and found his blackberry. Hilarity ensued!) At the end of the gunfight, we boarded the train. 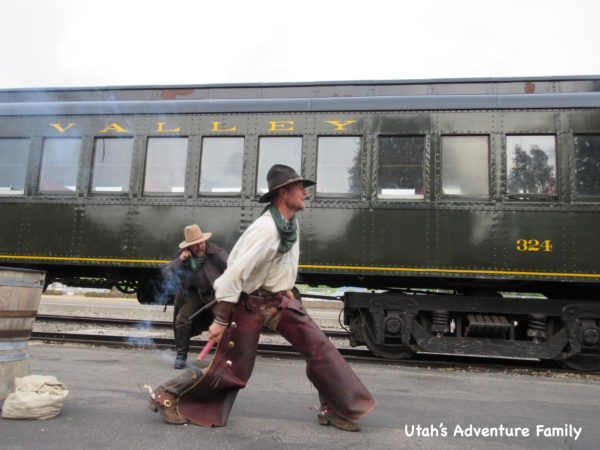 The show was really fun! There are loud noises, so sit/stand according to how your children do with gun shots! 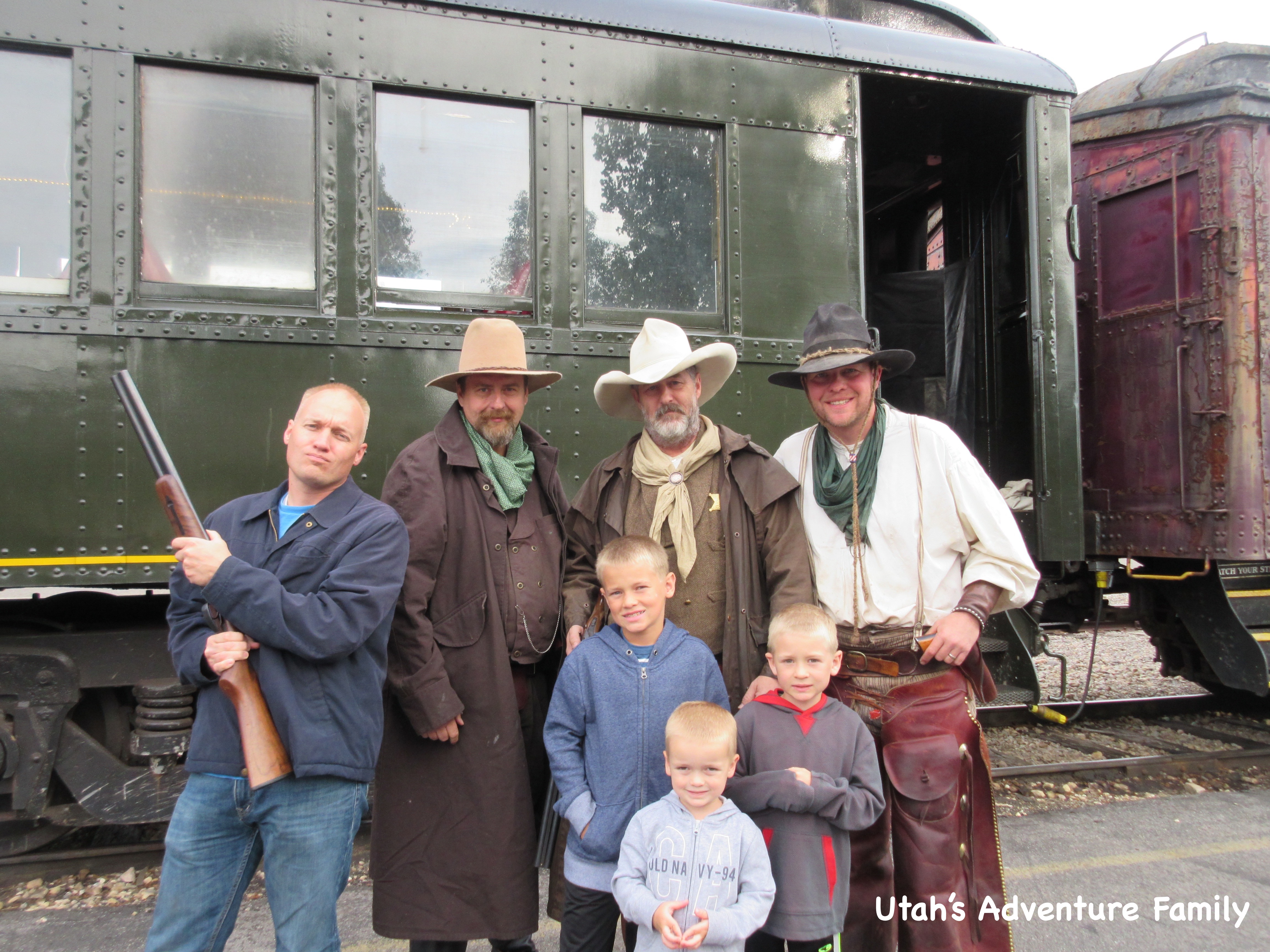 We caught a picture with the actors before the show.

The train ride runs through Heber and along Deer Creek Reservoir. We really liked the scenery because the lake is beautiful and we saw a ton of birds during the Spring. We counted at least a dozen ospreys. There were also pelicans, egrets, swans, ducks, and many others. The boys were excited because they could open the train windows and feel the wind on their faces. 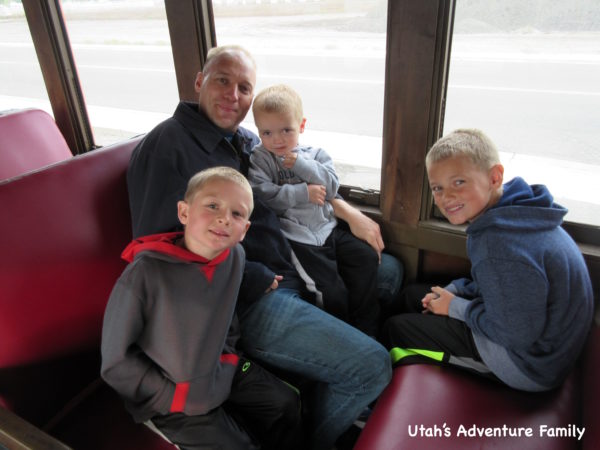 Our boys really love trains. Their favorite restaurant is Dairy Keen in Heber! 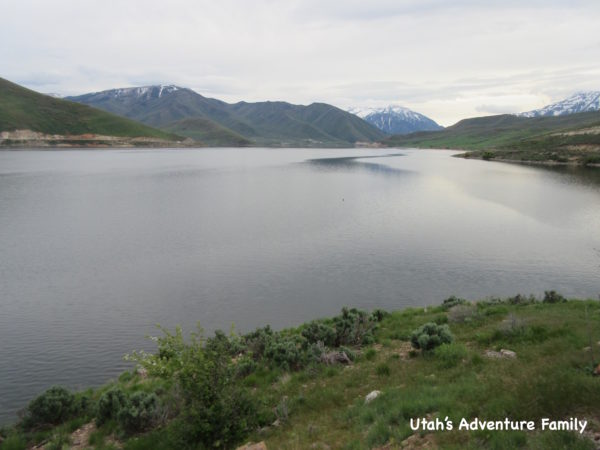 The view is beautiful. We saw deer cross the tracks, too! 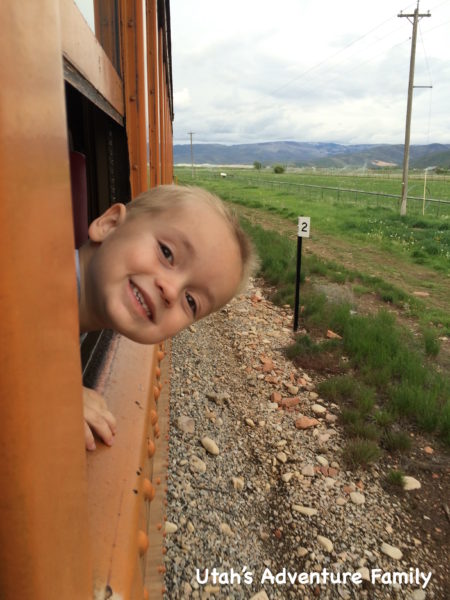 Our youngest loved sticking his head out the window for a better look!

There is lots more to do on the train than just ride, though. There are fiddlers on each car that play music. They even take requests. Mom and Dad liked Orange Blossom Special, but the boys liked the theme from Star Wars. We also participated in karaoke and other sing-alongs. The conductor even came along and punched our souvenir ticket. 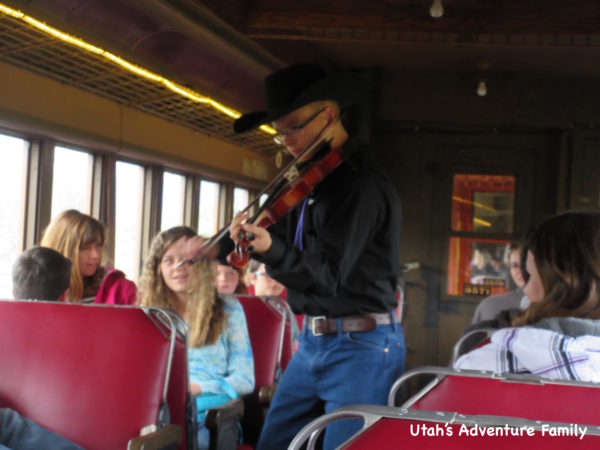 Here’s our fiddler. There are a few on board so there is music all through the train. 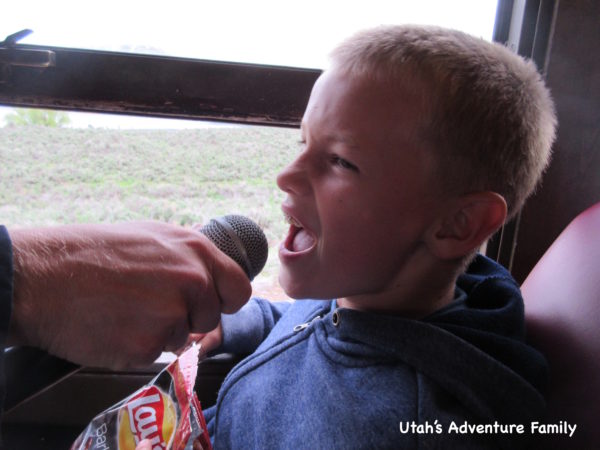 We really love “Don’t Stop Believing’!” It was a great karaoke song. 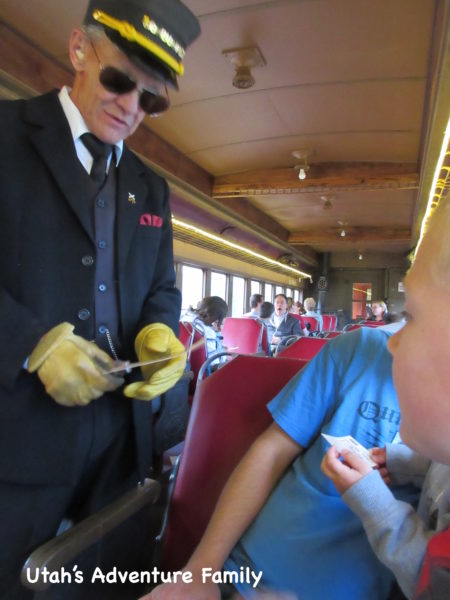 The conductor punched all our tickets to make the ride very official.

We also made a trek to the concessions car for popcorn and candy. Even if you don’t want to buy food (or use the bathroom) take a walk through the seven or eight cars that make up the Heber Creeper. It is an interesting experience to go between cars, and our boys liked it as much as anything. 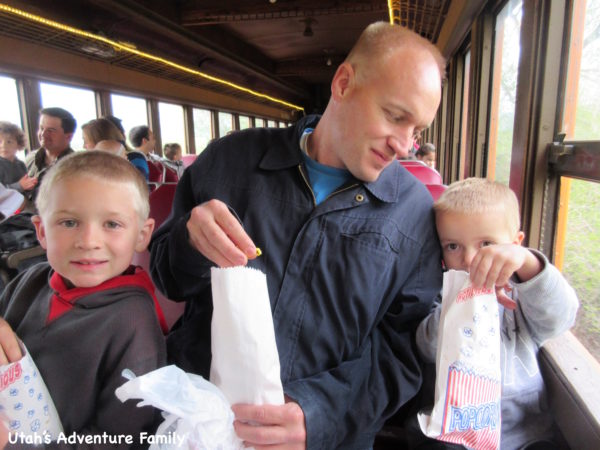 Here we are enjoying our popcorn. 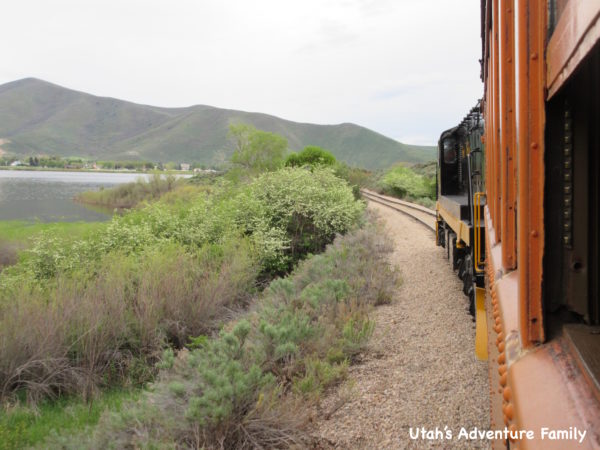 The train ride follows along a little stream, and then the edge of Deer Creek. It is a very beautiful ride.

About half way through our ride, we came to a complete stop. The train waited while the engine moved from the front of the train, to the other end. So we were in the first car to start, and then we were at the end. Otherwise the ride would have been really long around Deer Creek. The train also goes down to Vivian Park in the canyon on some of the longer excursions. It was fun to watch the engine chug on by! 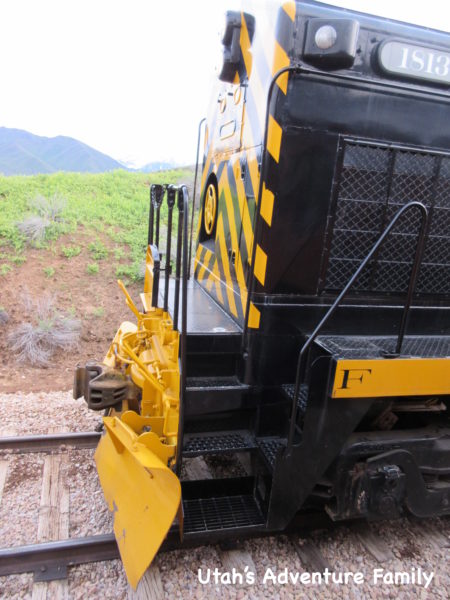 The engine came right past our window. 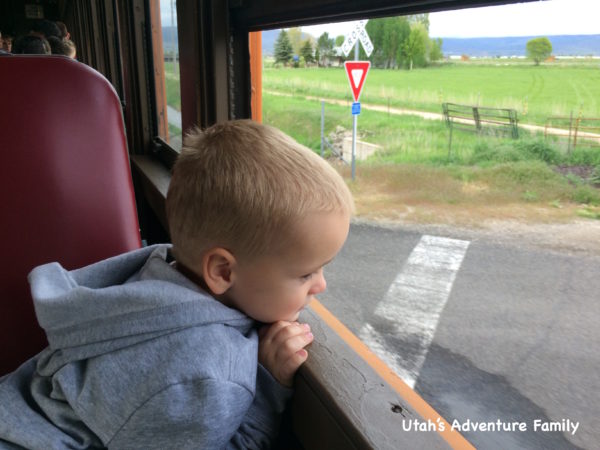 Our almost four-year-old was in heaven. This was the perfect excursion for him!

The Heber Creeper rides vary in length, and there are quite a few different themed trains you can take, but the Monday Night Train we took was 90 minutes, which was just perfect for our little ones. They weren’t bored for even a second, and they were begging to get back on the train! The Monday Night Train was also reasonably priced for families since it’s on Family Night. The links below are for discounts for some of the upcoming trains.

Heber Valley Wild West Days on May 27, 28, & 30–Tickets are 7.50 with this deal and include fun activities at the depot as well as the train ride. 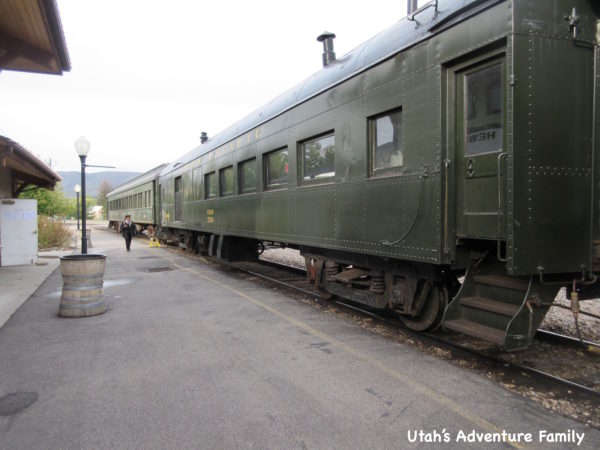