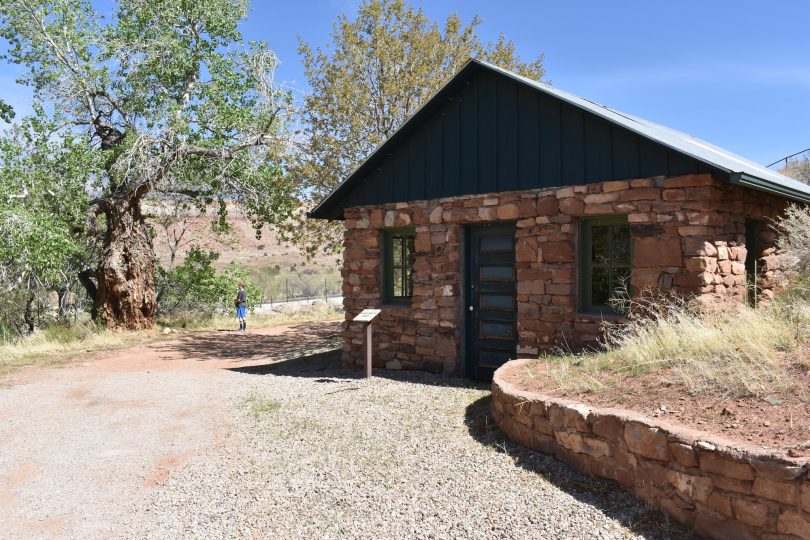 We made a quick stop at the Civilian Conservation Corp Camp in Leeds on our way to the Red Reef Waterfall trail. We love learning about this historical group who did so much for our country, especially our national parks.

The Civilian Conservation Corp, or CCC, was a New Deal era program to help young men provide for their families during the Great Depression. Specifically, young unmarried men ages 18-25 could work for the CCC on infrastructure projects for the federal government. They were provided with food, clothing, shelter and $5 per month, with $25 being sent home to their family. The CCC was instrumental in building many of the bridges and structures in our National Parks, and you’ll see tributes and plaques all over for this dedicated army of young men. Some of the more famous CCC men were Chuck Yeager, Stan “the Man” Musial, and Walter Matthau.

The Civilian Conservation Corp had a base camp in Leeds, Utah. They built their own lodgings and other buildings out of stone and mortar, and they still stand today. You can make a short visit to the Civilian Conservation Corp camp in Leeds and check out their handiwork. Most of the time, the barracks and headquarters buildings are locked up, but they do get opened on special occasions. Even if the buildings are locked, peek through the windows and wander about the yard to look at the historical buildings.

Not many people know about the CCC camp in Leeds, but it is easy to find. As you travel Main Street look for the sign on the west side of the road. When you arrive, make sure to walk up the stairs to see the camp headquarter building. This is where soldiers received their pay and spent it at the camp store. Around the hill to the west side there are a few more buildings and another path up the headquarters.

Though many people might find this a boring stop, we like the history. We’ve come to respect the young men of the CCC, so we notice their work across the National Park system. In some ways, they feel like family!