Did you know Utah has a semi-pro hockey league? The Utah Outliers are a Western States Hockey League team that plays high-level hockey games. We had a chance to attend a game recently, and it was so much fun! 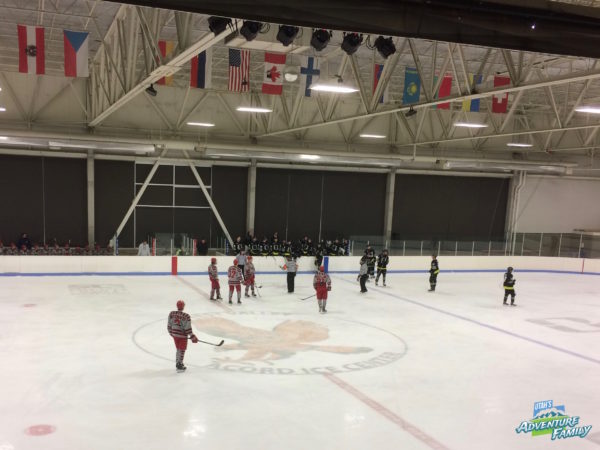 The Utah Outliers are a Tier II Hockey team located in West Valley.  The hockey players range in age from 16 through 20, and play the sport they love with the goal of moving on to NCAA hockey or even a professional league. We were impressed with the level of play when we visited the Utah Outliers arena.

First of all, we should admit that we are not big hockey fans. We’ve grown up around sports, and we understand the basics of the game, but none of us have ever played hockey. We don’t even watch much hockey on TV. Still we had so much fun watching the Outliers! We were surprised at how fast the game moves and how good these players are. The Outliers have a goalie that made so many unbelievable saves. We couldn’t believe how big, strong, and quick he was.

The Accord Ice Arena has bleacher seats on one side of the ice. There really isn’t a bad seat in the whole arena, but the chairs have no backs, so if you have stadium seats you might want to bring them. You will also want to dress warmly because the stadium is cold from the ice. We were wearing sweatshirts, but we were all cold by the end of the night. Next time we would wear gloves and hats, and maybe even bring a blanket.

Hockey crowds are notoriously rowdy, and this was no exception. There was plenty of cheering, screaming, and rooting. The crowd was really involved in the game. It’s easy to get caught up in a hockey match. The downside of this is that we attended a rivalry game. The Outlier fans behaved really well, but a few opposing fans needed a reminder about good sportsmanship. Our boys were subjected to cursing, cheering an injury, and inappropriate taunting. I don’t think this would happen at an ordinary game, but the rivalry between these local teams seemed to bring out the worst in a few folks. It was a nice teaching moment for us about what behavior is appropriate.

But the Outliers were awesome, and we don’t want to dissuade you from giving them a try. Hockey night is an amazingly energetic way to spend an evening! For tickets and schedules, visit the Outliers website. Tickets for children 10 and under are FREE!

Things to do in Moab