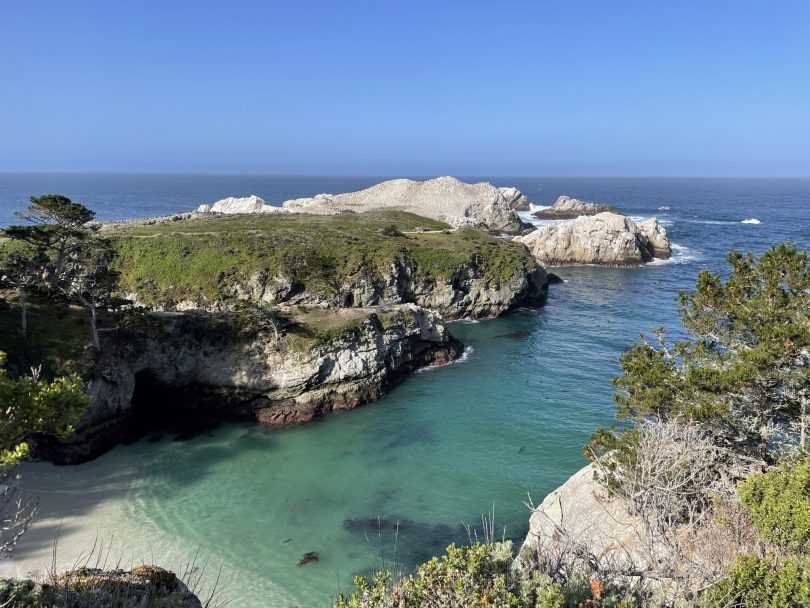 Point Lobos State Natural Reserve is possibly the most beautiful state park we’ve ever been to. This park, located on the beach just south of Monterrey, California, is a must-visit if you are in the area. There were a lot of things we loved about this state park.

The ocean in this area was the most beautiful shade of azure. There was just a hint of green as the waves broke toward the shore. In this part of California, the waves really crash! We did several hikes right along the coast, and each one was a new favorite. We took dozens of pictures of nothing more than the rugged coast, the white-water waves, and the crisp blue sea.

One hike took us to a place called Bird Rock. We passed all kinds of birds on this hike. There were hundreds of cormorants, dozens of brown pelicans, and countless gulls. We also saw a peregrine falcon nesting neatly above the trail. We counted half a dozen hummingbirds as well. Point Lobos State Park is a paradise for birders. We saw birds on every trail in Point Lobos State Natural Reserve.

Along with the variety of birds we saw, there were a lot of other animals, too. The boys spotted several lizards on the trail. We saw two tiny brown rabbits in the thick brush. We saw deer at a distance. Best of all, though, were the sea otters. We spotted at least a dozen otters. Since we were there in the Spring, many of them had fluffy pups. The mothers rested on their backs with the tiny pups on their bellies, soaking in the sun. With a decent pair of binoculars, you can see them quite clearly.

We were amazed at the amount of people in the park that were there to answer questions. On almost every trail we walked, someone came along and pointed out something interesting to our boys. There were volunteers at the trailheads, and others walking through with groups of students on a field trip. Along with being the most beautiful, this park was the most friendly we’d visited, too.

We did 4 easy trails in half a day at Point Lobos State Natural Reserve. This is the order we did them in, too. Bird Island is the furthest away and has the smallest parking area, so we headed there first and got the last spot. Phew!

This was our favorite hike. The China Cove water was stunning, and we were lucky enough to see baby seals learning to swim with their moms. Then we continued on to Bird Island where we spotted Sea Otters learning to swim, too. There were also as many, many birds. This is a must-do hike in Point Lobos (and you can push wheels on this trail).

This trail offers beautiful views of the coast and a great chance of seeing sea lions, seals, and sea otters. We saw a few sea lions they day we walked this pretty trail. It is wheel-friendly. Begin this trail at the Sea Lion Point parking area.

This hike begins from the Sea Lion Point parking area, too. It wanders through old cypress tree groves, but also provides amazing looks at the turquoise water. We enjoyed watching the churning water along the coast in this part of California. This trail is not wheel-friendly. They are rocks and stairs along the trail.

Technically this isn’t a trail, but there is a little walking involved. Park by Whaler’s Cove and then walk back up the road to the Whaler’s Cabin you drove passed on the way down. There are some historic artifacts and whale bones from when this was a whaling station. We learned a lot about the history of the area in this little museum. We also ate a picnic lunch at one of the tables by Whaler’s Cove where we watched seals and sea otters and birds in the little cove.

There was a lot to see at Point Lobos State Natural Reserve. We spent a half day walking the short, easy trails. We could easily have spent more time exploring. Many of us said this was our favorite spot on our California trip.

Our number one tip is to arrive early as parking tends to be a big problem later in the day. People often end up parking outside of the park and walking in, so plan on arriving when the park opens if possible. For more information on hours, visit the California state parks website.

No dogs are allowed in this state park.