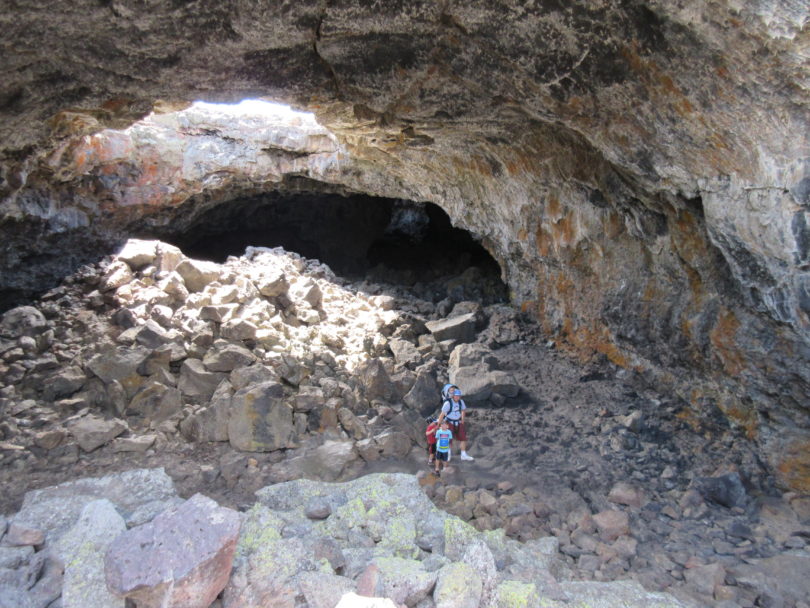 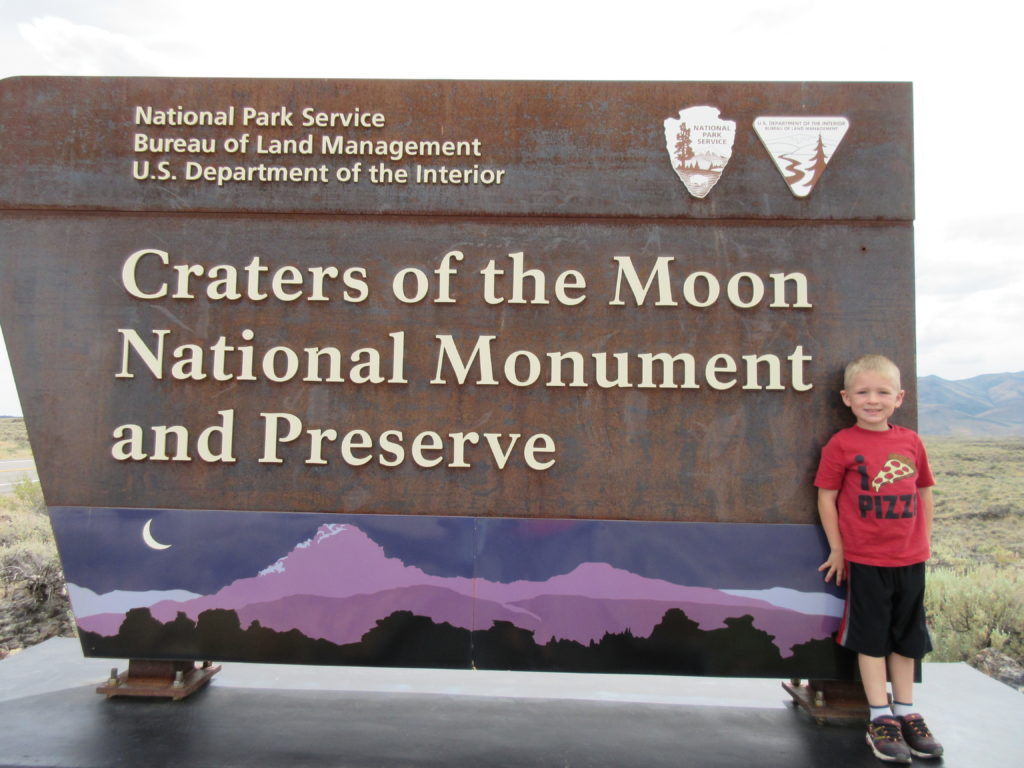 We had a blast at Craters of the Moon.

We had an awesome adventure in Idaho today. Craters of the Moon National Monument is located about 50 miles northwest of Pocatello. The park itself is very unique. There is black volcanic basalt strewn for miles and miles across the rolling hills.

We learned a lot about the volcanoes that covered Idaho thousands of years ago. There are several caves, which are really lava tube tunnels, to explore. (Make sure to take along a good flashlight.) Here is a quick run down at the park.

The landscape is really unique and interesting.

The Visitor’s Center is small and has a short film, a tiny museum, and a gift shop. You can pick up a Junior Ranger booklet for you kids, too. Don’t plan on spending too much time, though you can ask questions about the conditions of the park. There is also a campground. 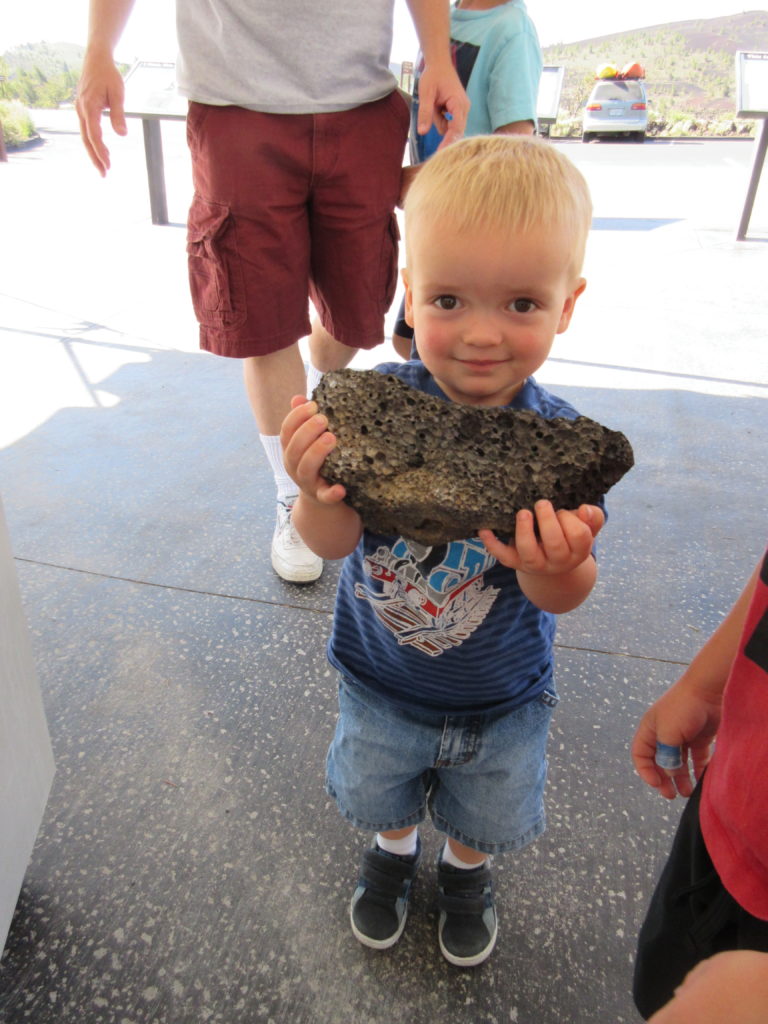 The lava rocks are light and full of air. We learned about them from the ranger. 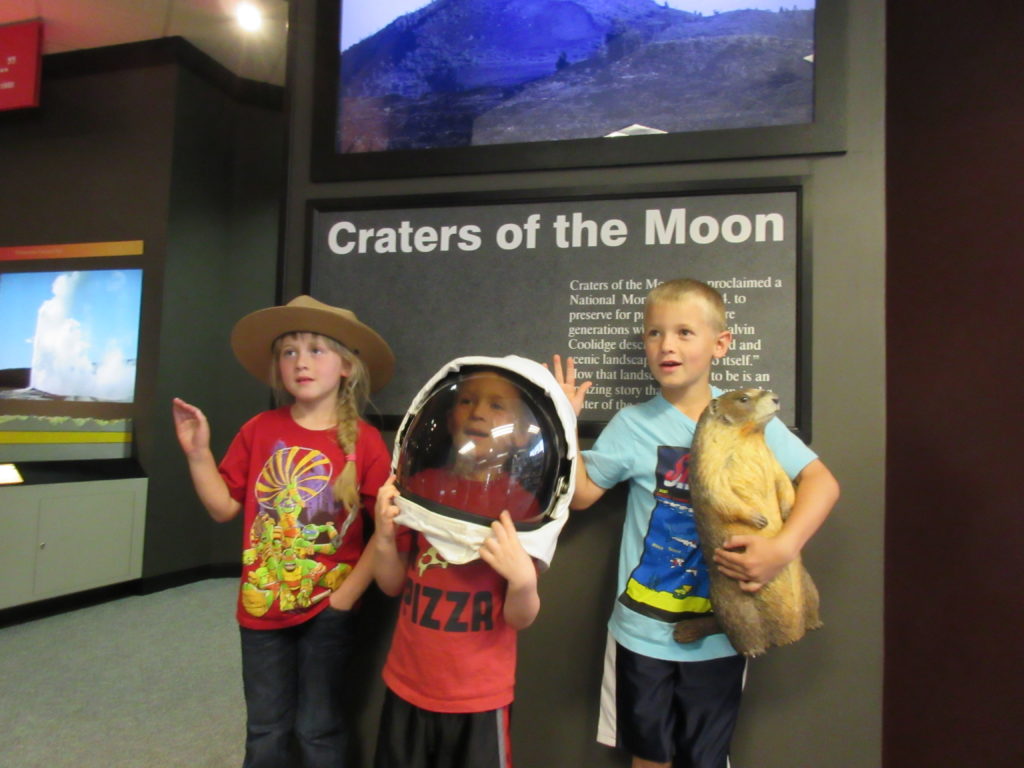 The Junior Ranger program was so fun! They got to dress up when they took their oath.

There are several overlooks around the park, and a few short walks. The first walk we did was called North Crater Flow Trail. This hike is only about a half mile loop, and is a good interpretive introduction to the park. We got a great idea of what we were getting into, and the trail was accessible for pretty much anyone. 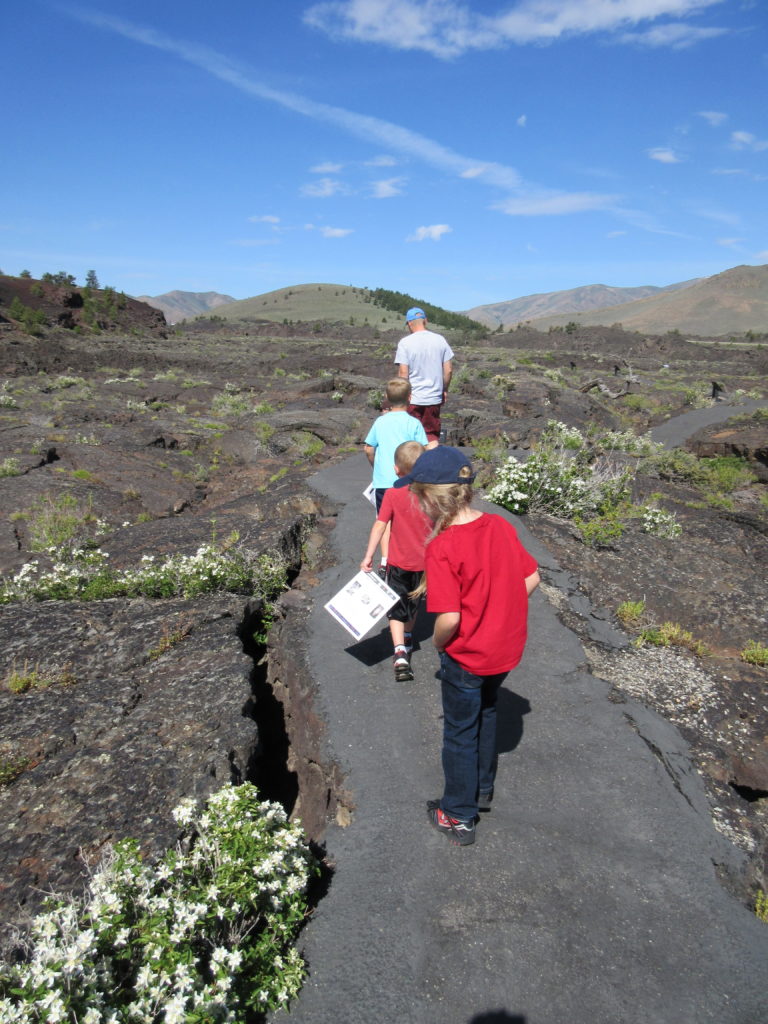 This trail is easy and fun.

Next we drove around to the Devil’s Orchard Nature Trail. This trail snakes around through the bristle cone pines past a few geological features. If you are going to skip one hike, skip this one. A better stop is the Sno-Cone (there was snow in there in June!) and the Splatter Cones. The trail is short and easy, and the views are better. 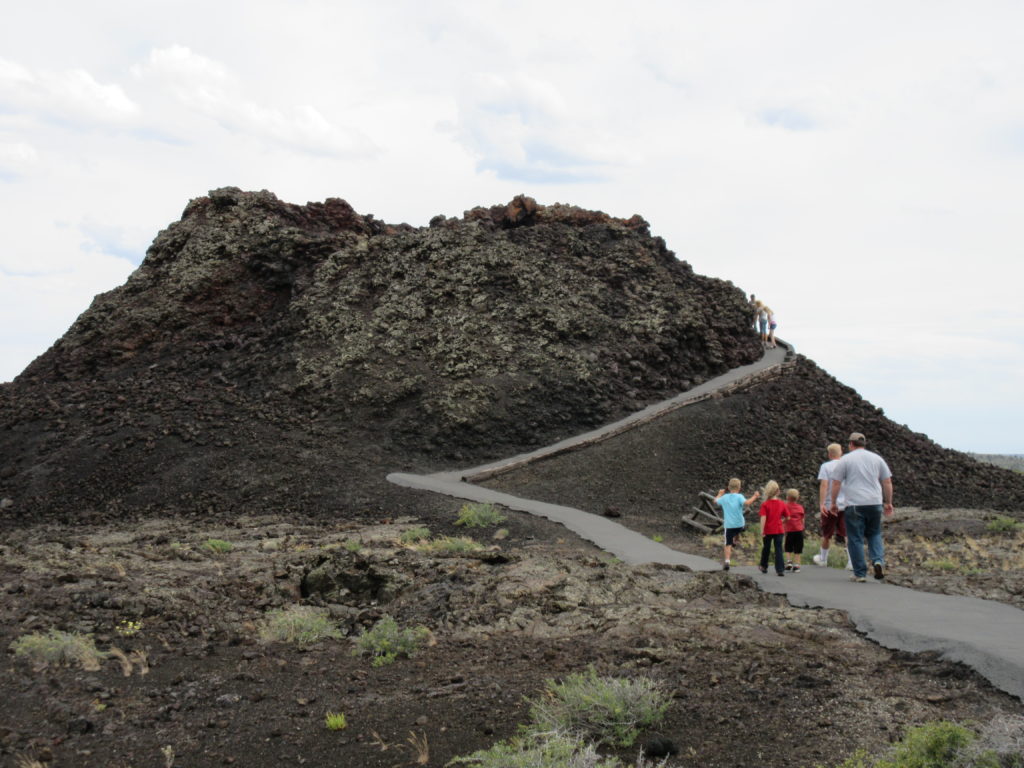 Splatter Cone–you can walk up and look inside. 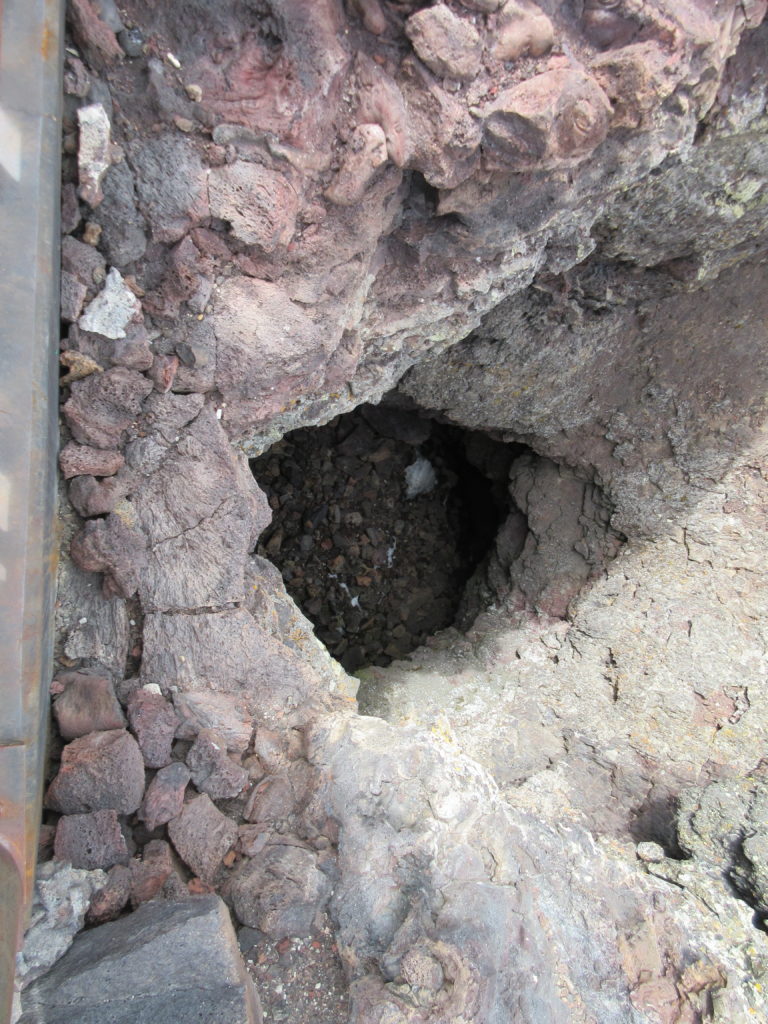 Do you see the snow down there?

On around the one-way loop, you come to the area called Big Sink. Turn right at the sign for Tree Molds. There is a loop that is a little less than 2 miles. It loops around the ancient volcanic cone. We did the loop clockwise to follow the trail guide. The highlight of this hike is Buffalo Cave, which was my favorite cave in the park. The opening is slightly treacherous to climb into (enter by the sign; the other direction is just a large open cavern), but then the cave opens up quite nicely. You can walk about 80 yards into this cave, and the best part is that small surface vents provide a bit of natural light. The cave goes straight for about 40 yards, and then turns back to the right for about 40 yards. Though there is a little light in Buffalo Cave, you will definitely need a flashlight. I nearly cracked my skull open, and I had a flashlight. We spent about 20 minutes in the cave and 90 minutes on this hike. All of us, even the 2 year-old enjoyed this cave. 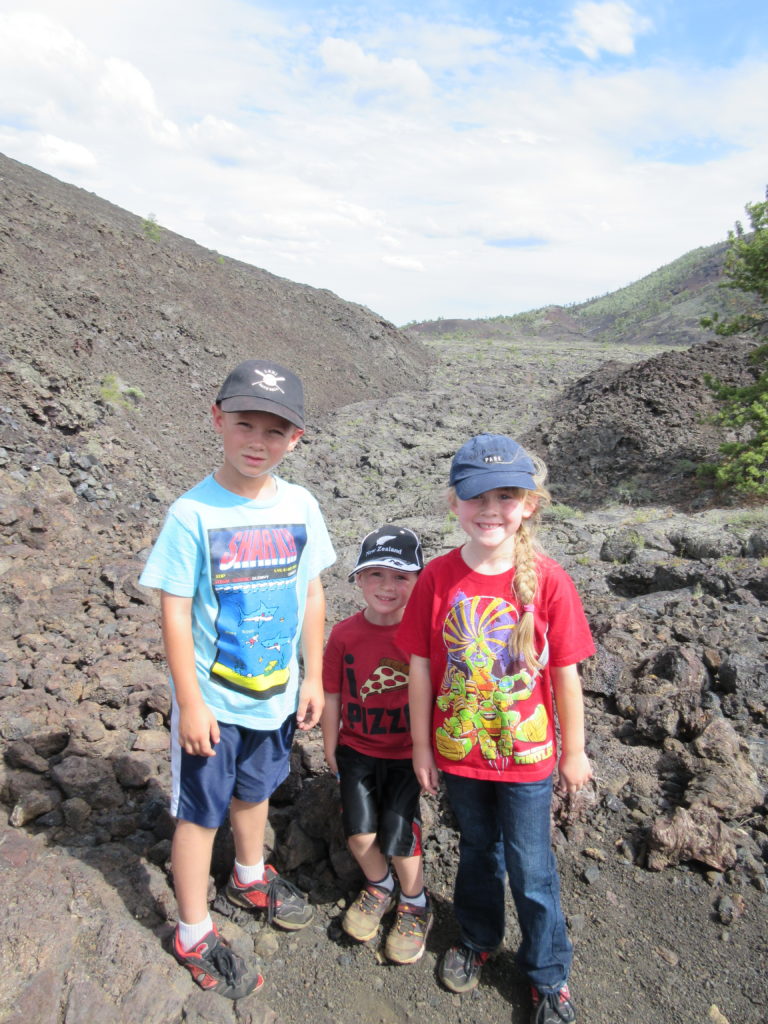 This was one of the volcanoes that helped spew all the lava…it was a huge crack in the earth. 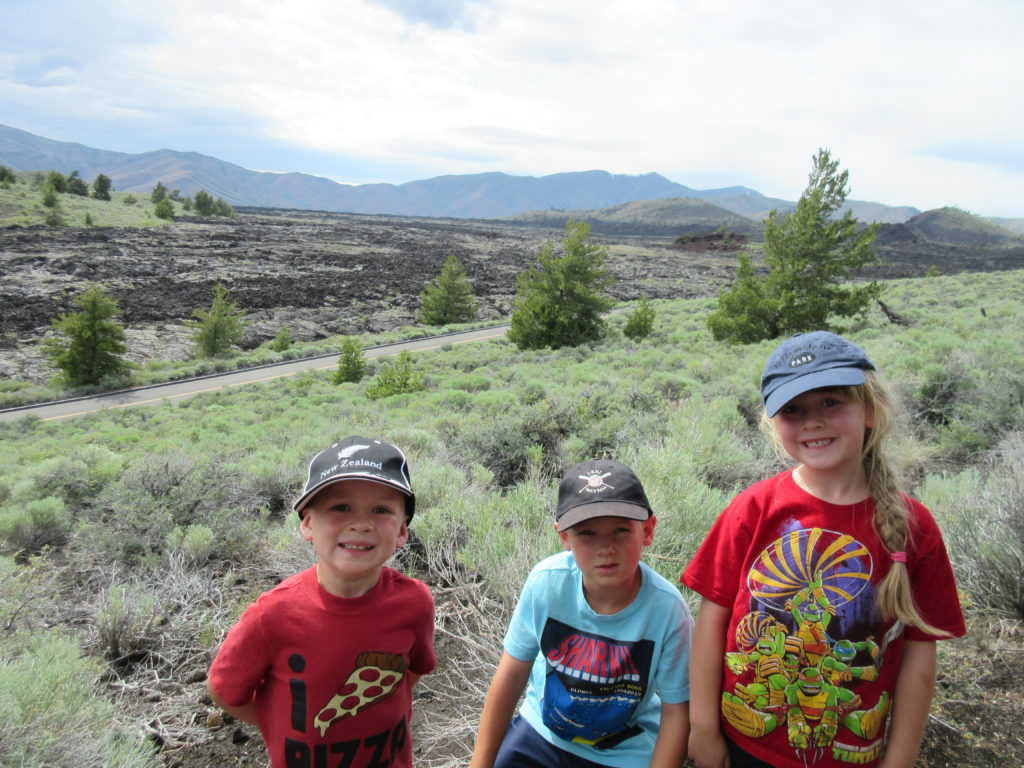 The lava fields go on all the way to those mountains. 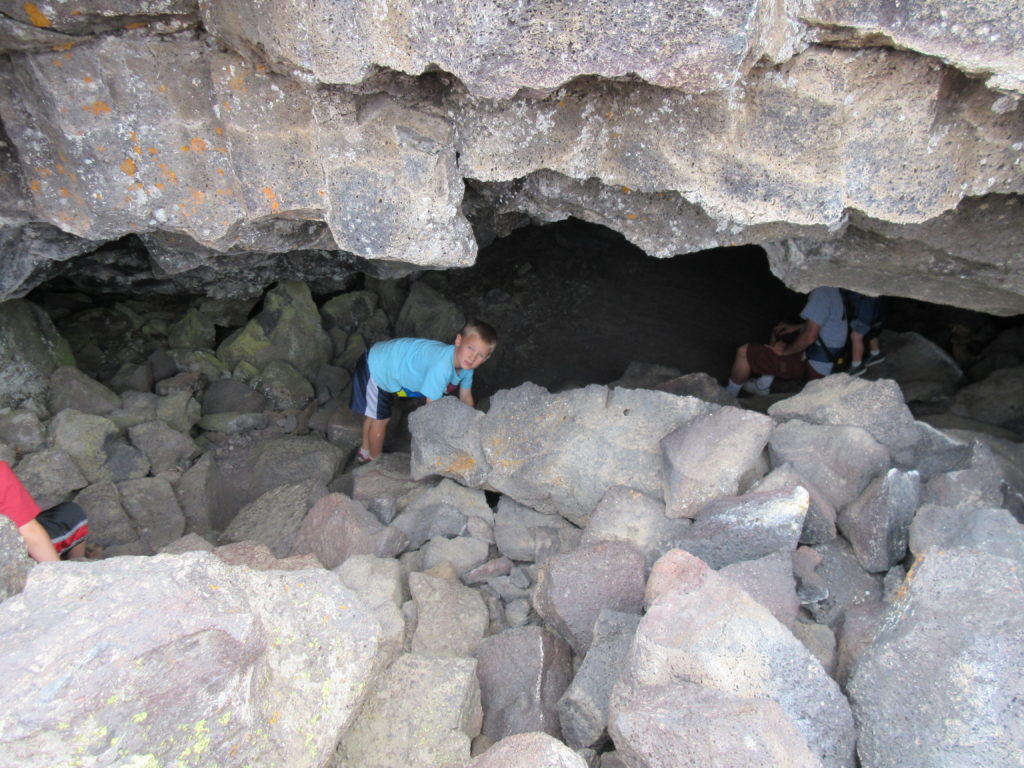 Buffalo Cave has the trickiest entrance. 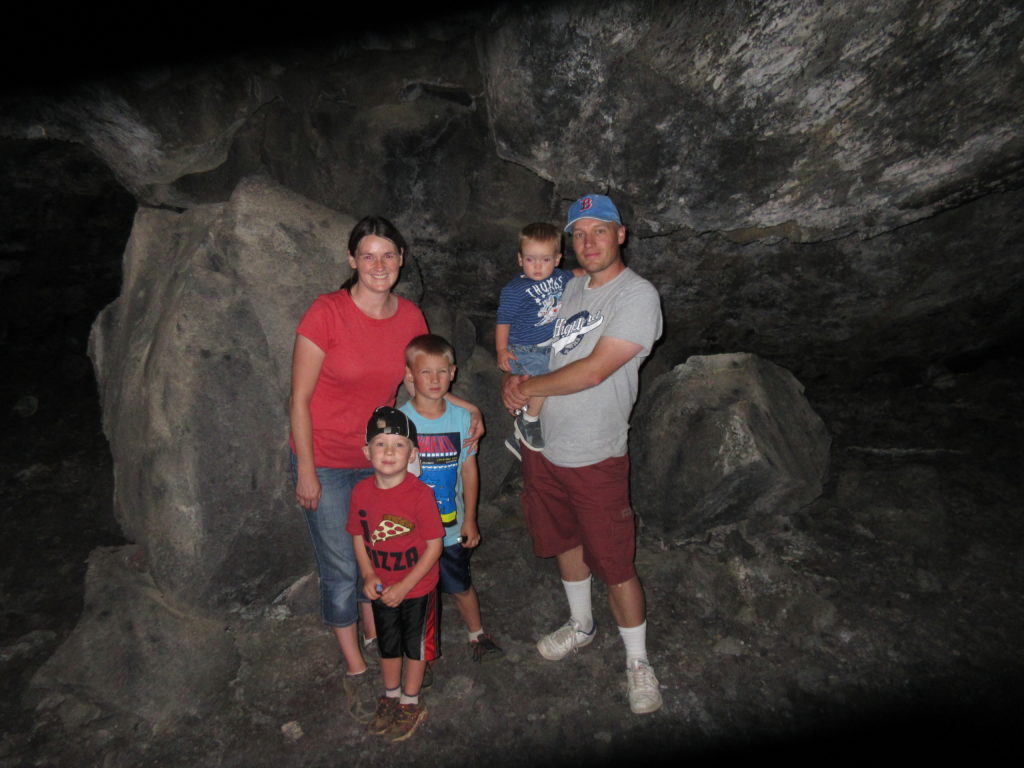 A little further down the road, is the main area for lava tubes. A hike of around less than a mile each way takes you to 4 different caves. The first, called Dewdrop Cave is right at the junction of the trail. This is a small depression like the one opposite Buffalo Cave. You can explore it without a flashlight as it is more of a depression or alcove than a tunnel. Down to the right is the one cave that every visitor should do, even with out a light. Indian Tunnel is mostly caved in, meaning, the roof is mostly gone, so it is not dark inside. Think of it as a tunnel with a sunroof. You can scramble all the way to the end of this cave and walk across the lava floes back to the main trail. 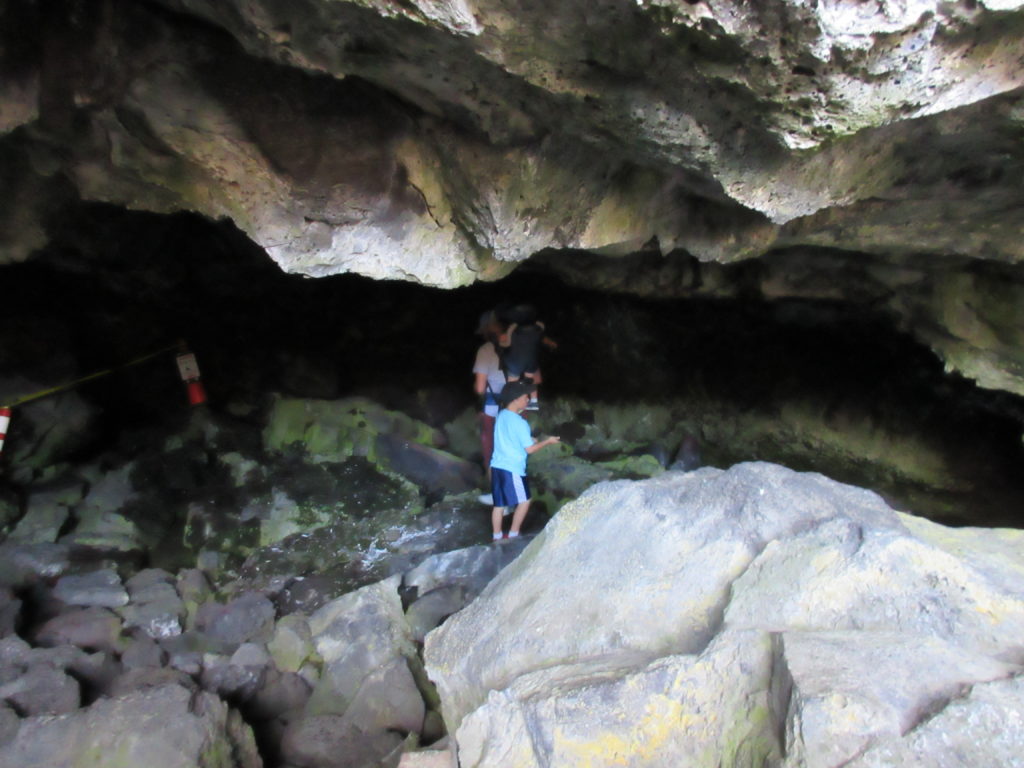 Dewdrop Cave is just a small area to walk in. 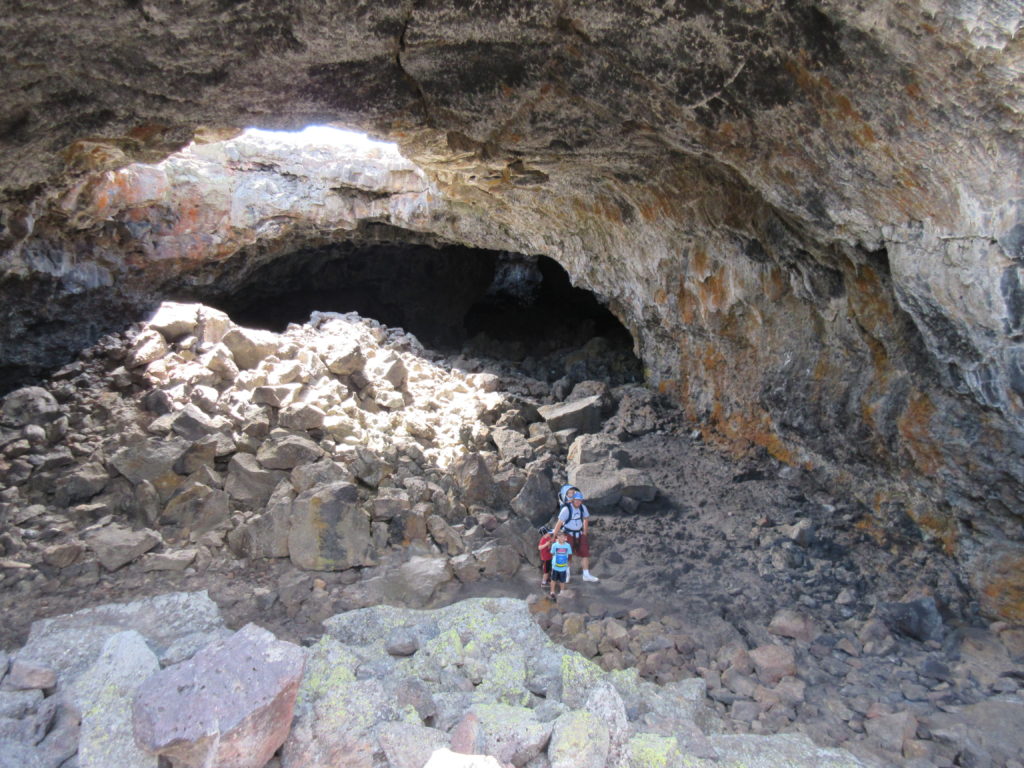 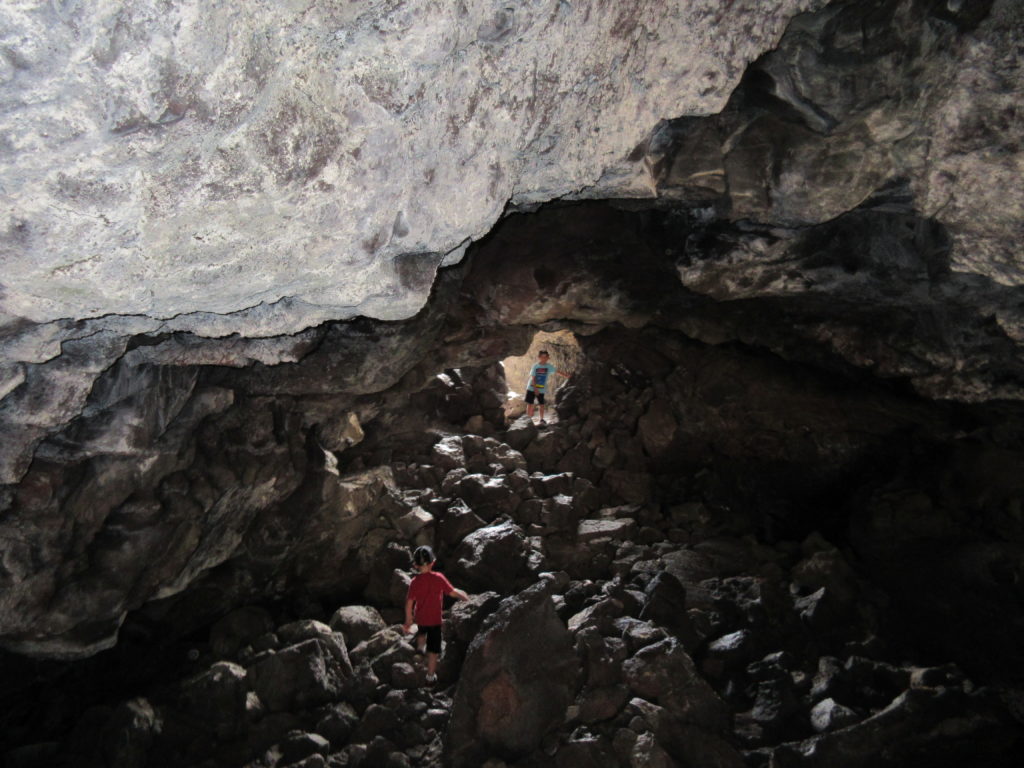 That is the way out of Indian Tunnel if you walk all the way through.

Down the other leg of this trail are 2 more caves. The first is called Boy Scout Cave, and I wouldn’t recommend it for children. The cave splits in 2 directions. To the right, a narrow squeeze (watch your head) leads to a large open room. You can scramble around here and explore a little ways, but the passage soon becomes a crack about 30 inches high. Kneeling on the basalt floor is very painful, so we didn’t continue, but the map shows this cave continuing to another exit. The better route in Boy Scout Cave is to the left. The opening is steep, but wider, and when you reach the bottom, a nice round tunnel greets you. You’ll definitely need a flashlight. There is ice in this cave and it is very cold. It’s a lot like walking down the barrel of a huge cannon, assuming the cannon is filled with loose wet basalt. The sign said up to 2 inches of standing water are possible, but we just met a few drips and a damp floor. The end of the cave is about 120 yards away. 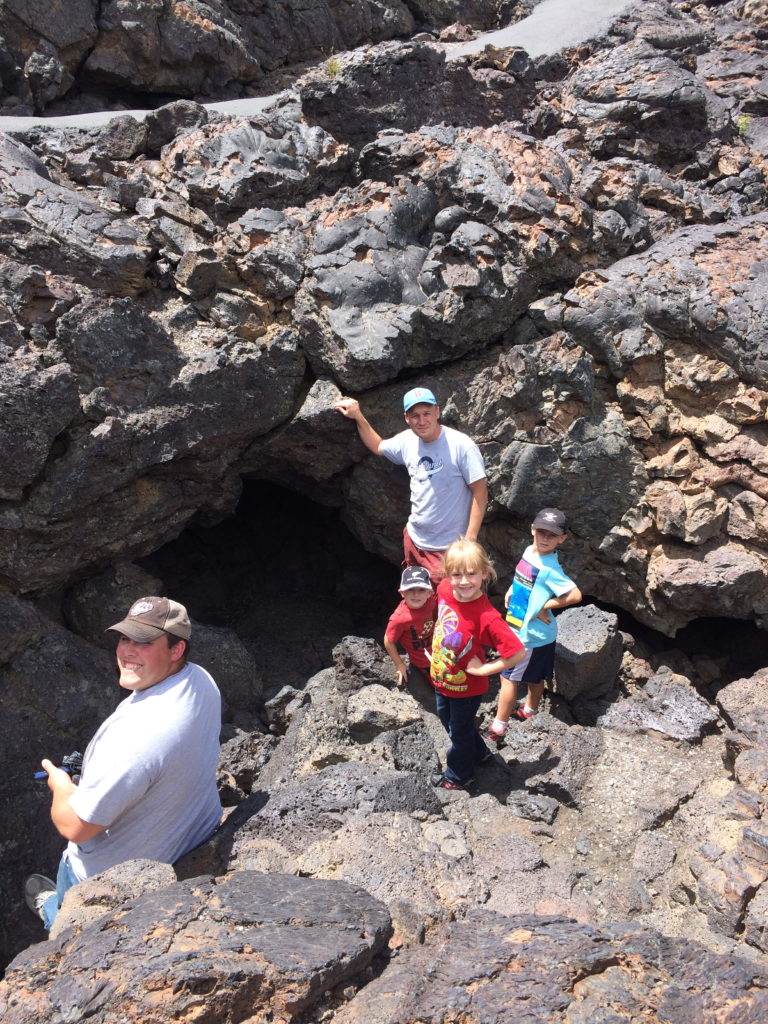 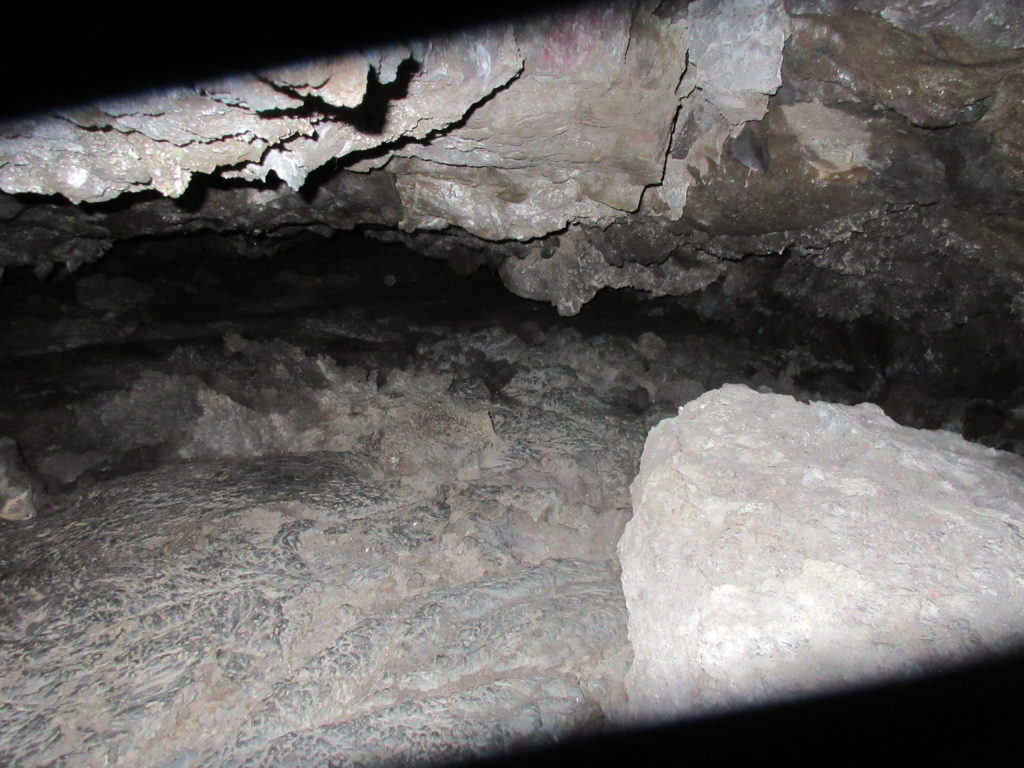 The last cave is called Beauty Cave and is probably the most famous. Access is much easier than Boy Scout, and you still get the tunnel experience. The cave is short (40 yards), so you don’t quite get away from the natural light of the opening. You’ll need a flashlight, though. Caving is the best part of this adventure, so plan for it. Take flashlights, wear jeans, and cover your head. 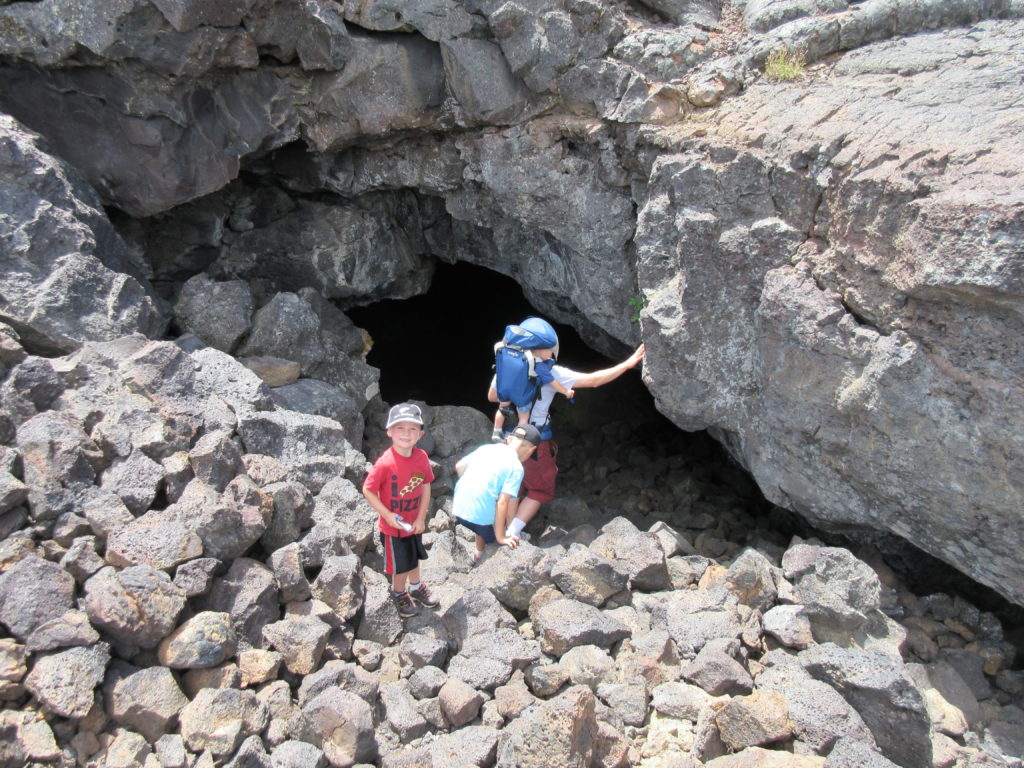 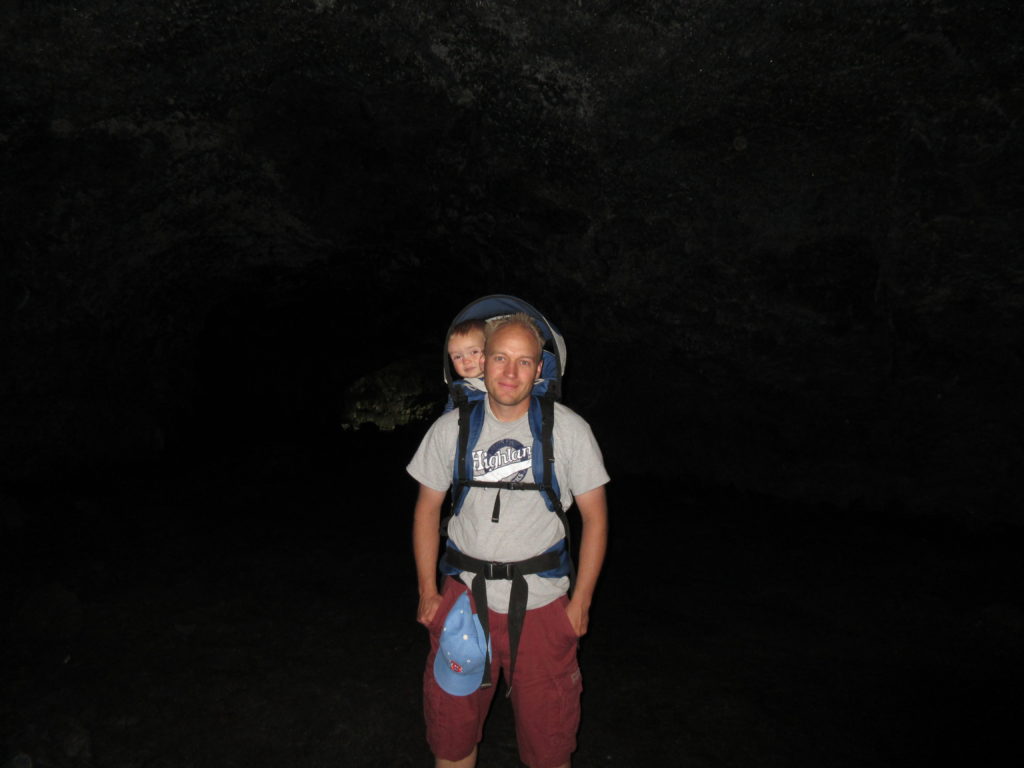 It’s dark in Beauty Cave, so I had to use the flash for all pictures.

This video gives a quick overview of all the caves on the Cave Trail.

We spent the entire day at Craters of the Moon National Monument. It was an amazing adventure, and we all left saying we’d gladly do it again. Be warned: the nearest services (ice, gas, and food) are 20 miles away in the small town of Arco. Happy Spelunking! 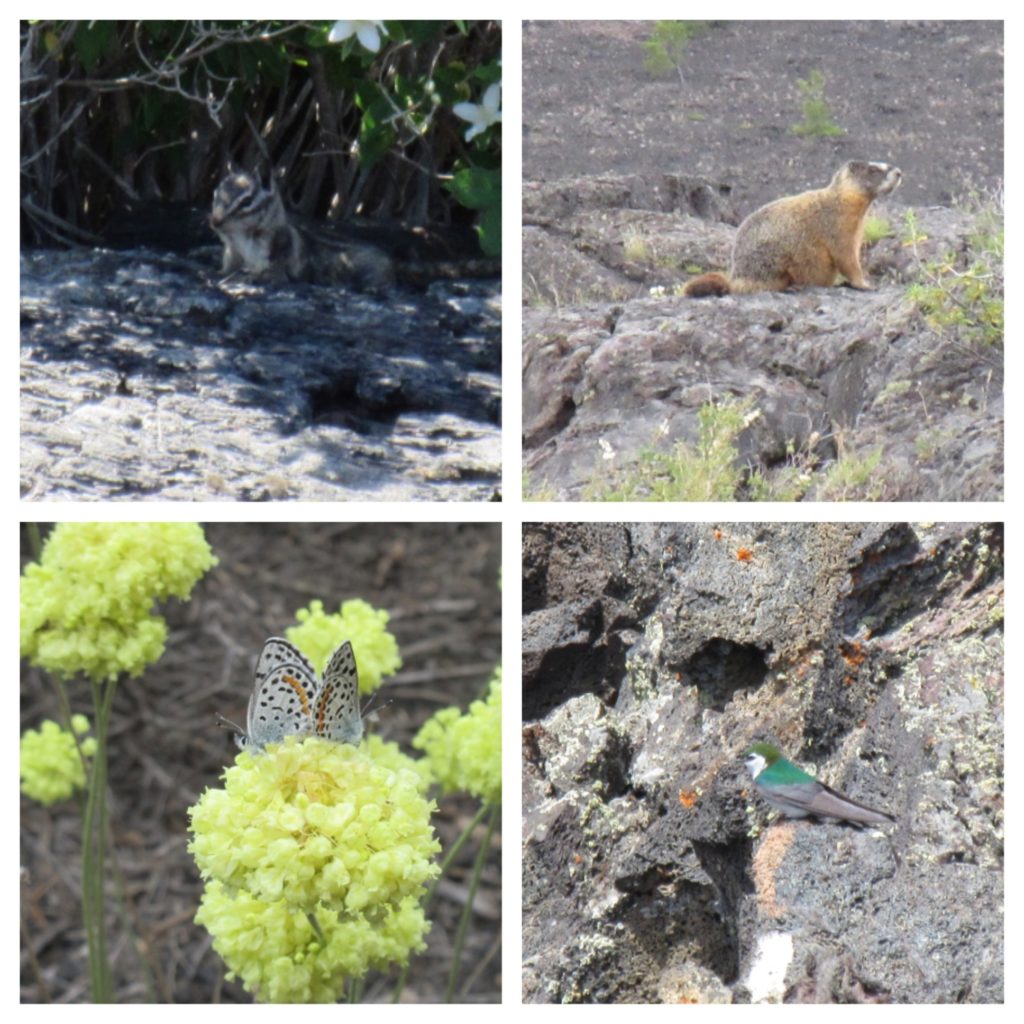 We loved finding wildlife throughout the park.