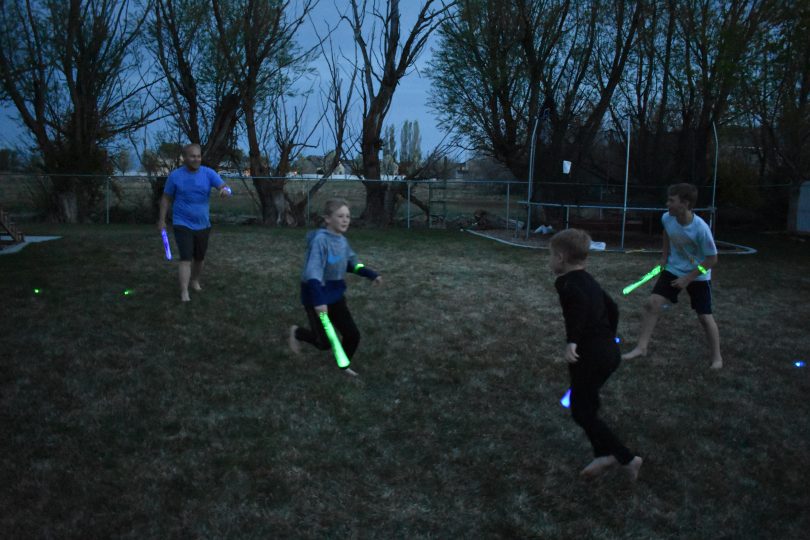 Utah’s Adventure Family is all about family adventures at home. Recently we had the opportunity to try a couple of new, different types of family games that our boys loved. StarLux Games creates glow in the dark family games, and they are especially great for large families or get-togethers.

Starlux Games has taken Capture the Flag and made it a lot more fun. First, they have made a dozen variations to the game. Their game pack comes with instructions on how to tweak this game to make it just right for you, and to make it an entirely different experience

Even better, Starlux has made this game glow. The goal, the “prison,” and all wristbands glow, so you can easily play this game in the dark! We set up a line of lights (provided), put on the wristbands, and set up the goals right at dusk. As it grew darker, it grew more fun! Our boys had an amazing time chasing, dodging, and capturing one another. Even Mom and Dad had a good time.

We can’t wait to use this one at the family reunion this year when we have a few more people. With only five people, we tired out pretty quickly. And we will definitely use this for get-togethers with friends (once they are allowed again).

The other game from StarLux that we tried out was called Glow Battles. This game comes with lots of battle wands and glow bracelets. Basically people get to whack at each other like light saber battles. It was fun to try the different variations of games. We liked Glow Battles because there were more games that worked smaller groups of people.

We especially liked playing Thieves and Robbers. One team tries to steal the lights, while the other defends. Everyone was laughing as we whacked at each other. There were so many different games to play that we only got a few checked off the list. We also used the Glow Battles game inside and outside.

We were really impressed with StarLux Games and their products. They share a similar mission of ours to share adventures that families can do together. One of their creators is from Utah, too! We love these games for their ability to be played by kids of all ages, so they reach from toddlers to teens! Check out StarLux Games products here.