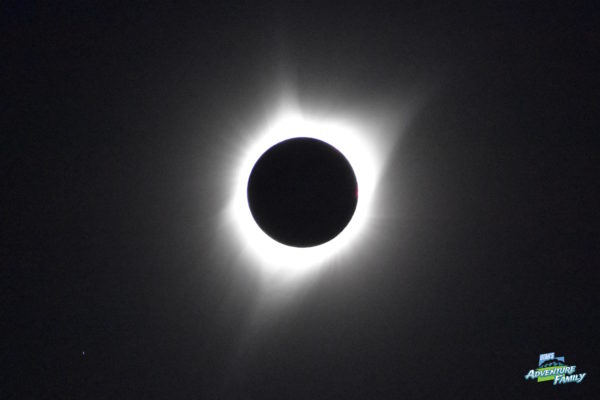 We had an amazing experience with the Great American Eclipse on August 21, 2017. We are lucky enough to have a sister in the tiny town of Ucon just north of Idaho Falls. My husband asked her if he could stay over a year and a half ago for the Total Solar Eclipse. She was surprised, but willing.

We drove up to Idaho Falls early Saturday morning, and the traffic wasn’t too bad. In our little niche, we hardly even noticed the increased population. The eclipse actually took place on Monday morning and started in Ucon at about 10:19 am. We had all the kids gathered around with eclipse glasses as the moon began creeping across the tiniest sliver of sun. We were a little surprised that the moon had been entirely invisible all morning, because sometimes you can see it during the day. It must have been too close to the sun to be seen.

We turned up the old-school rock-and-roll and started snacking on homemade Moon Pies, Starburst, Eclipse gum, and Italian sodas. Mostly, the kids played in the backyard and the adults hung around for an hour. It was nearly 11:15 before you could really notice a change without the eclipse glasses. Then the sky slowly turned dusky. It was sort of eerie, because it felt like sunset, but the sun was still glowing brightly above. The excitement started to build as the eclipse glasses slowly showed the sun diminish to a sliver. We noticed the air temperature drop dramatically. Though we didn’t have perfect equipment, it seemed to go from 82 degrees to about 66 degrees! A few of our kids were asking for jackets.

As the last sliver of sun disappeared there was an orange sunset around the horizon for 360 degrees. We noticed a planet, probably Venus, and a few of the brightest stars. Then everything was dark. The sphere of the moon stood out brightly against the corona of the sun. It looked like a large black ball against an oncoming headlight. Cheers erupted, and the kids started to run and scream. We even noticed a cat sleeping in the middle of the day! (Okay, that may have been normal.)

We watched in the dark for nearly two minutes. The eclipse glasses were tossed aside and no light came from the sun. It was a surreal, sublime, spiritual moment. We were excited, awed, and emotional all at once. Then the sun began to peak out of the other side and the gloaming came back. Immediately, we needed the eclipse glasses, but we didn’t put them on. Instead, we tossed the lawn chairs in the van and hit the freeway.

One of the things that we’d been warned about was Armageddon like traffic on roads south out of Idaho. Though the traffic was thick around the exits, we didn’t have too many slow down moments. By the time we hit Pocatello, it was mostly open road, but thick with cars. In fact, we made it back to Lehi in exactly four hours. The trip usually takes us three and a half, so we felt like we did okay.