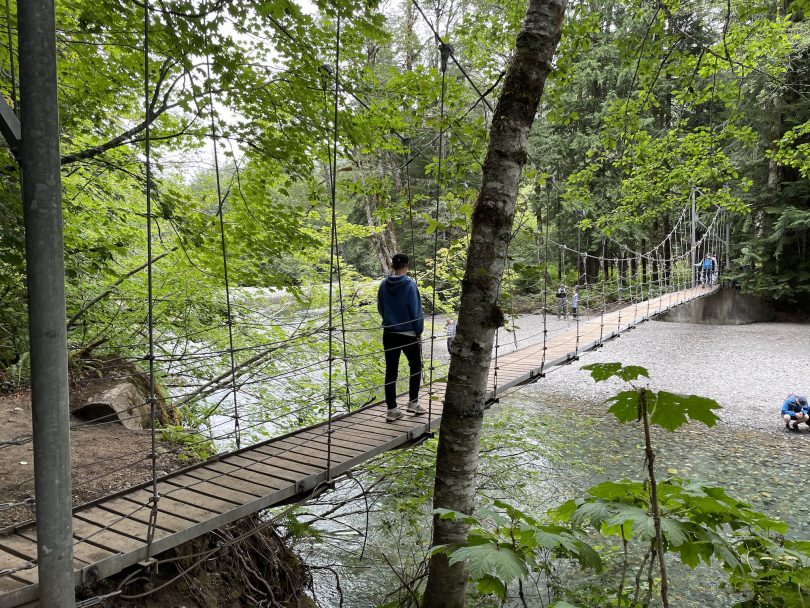 The Grove of the Patriarchs in Mount Rainier National Park is a wonderful nature trail. There are some really cool sites on this trail, including a suspension bridge across the river that is quite an adventure! The trail is only 1.1 miles roundtrip, but it is well-traveled, so go early or late so that you can find a place to park.

The trailhead for Grove of the Patriarchs is in the Ohanapecosh area of this National Park. There is a parking lot, but it isn’t nearly big enough for the number of people that want to travel this trail. Add the Silver Falls Trail that starts across the street, and you may have trouble finding a place to park. Many people park all up and down the sides of the road, and as long as you can get both wheels over the white line, this seems to be acceptable.

To start the hike, go to the restrooms. The trail heads pretty well straight north behind them. It is relatively flat and follows the river for just over a third of a mile. Eventually, you come to a shaky suspension bridge that crosses the river to the east.

When I say shaky, I don’t mean that the bridge is unsafe. I do mean, that it shakes quite a bit and compels you to grab the handrails. It is a one-lane bridge, and a sign at the crossing recommends that only one person cross the bridge at a time. When we crossed, there were quite a few people waiting, so several would go about twenty feet apart in the same direction, then several in the other direction, and this seemed safe. You wouldn’t want to pass anyone on this bridge though. Unfortunately, you can’t really stop and take pictures because there are folks waiting to cross. We found the bridge to be the most exciting part of Grove of the Patriarchs.

When you get across the river, the trail divides making it what they call a lollipop trail. This means that there is a small loop toward the end of the trail. You can venture in either direction around the loop as it enters the Grove of the Patriarchs in Mount Rainier.

Along the way, you will come to several massive trees that have stood for, in some cases, thousands of years. These are the Patriarchs, meaning “fathers.” The trees were really massive and impressive, but this part of the Pacific northwest has a lot of massive trees, like in the Redwoods, or the Olympic Peninsula of Washington. We loved walking among these giants, and especially liked walking around one that was right in the middle of the trail.

The Grove of the Patriarchs in Mount Rainier National Park is one of our favorite trails. The kids loved it because of that suspension bridge. The trees were like icing on the cake. It is appropriate for hikers of all ages, though wheels would not work on this trail.