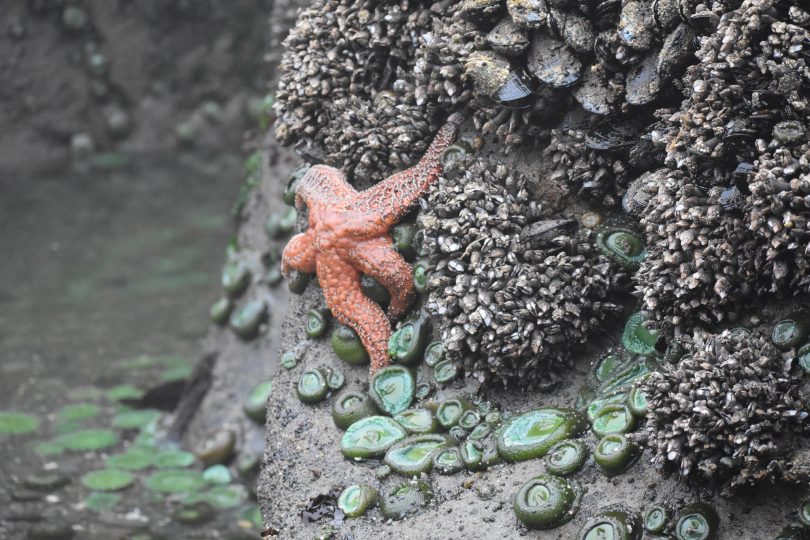 When we went to Olympic National Park, one of our priorities was to find some good tide pools. We love the ocean, and our boys were excited to try and find a different kind of wildlife. So, we checked the tide chart and got up early to check out Beach 4 on the Washington coast. We were not disappointed.

Beach 4 has a large parking area at the top of the hill near the Kalaloch Lodge in Olympic National Park. It is a short walk down a set of stairs to the beach. The stairs are wide and not too steep, so most people can easily make it down to water’s edge. The climb out is the tough part! When you reach the bottom of the stairs, turn right and head toward the large rocks. At low tide, the rocks are standing high up out of the sand.

When we reached the rocks, we first noticed the anemones. They are a flourescent green color, very vivid and pretty. There were several different kinds, and though they appear sort of shrunken and closed up with the tide out, they are still cool to spot.

A little farther on, we started to see starfish. They were primarily bright orange and purple, and surprisingly large. Most of the starfish that we saw were easily larger than an adult hand. There are thousands of them clinging to the rocks, particularly under the overhangs in the wettest places.

When we took a closer look in the tiny pools, we could sometimes see small crabs. Some were as small as a fingernail, but others would fit snugly in the palm of your hand. Don’t worry, though, we didn’t pick anything up. We did allow our kids to carefully touch the starfish after checking the tide pool rules. Olympic National Park has some great tide pool tips and etiquette when visiting the tide pools.

As you explore the pools, please watch where you step These tiny creatures are very vulnerable. Huge human feet can easily spoil a crustacean’s day, so go slowly and carefully. This is in your best interest, too, as the rocks are slippery, and occasionally sharp. Children should be closely monitored as they explore the tide pools, too. As long as you’re safe and careful, you’ll love tide pooling at Beach 4 in Olympic National Park! You can also check out tidepools at Ruby Beach and Rialto Beach.