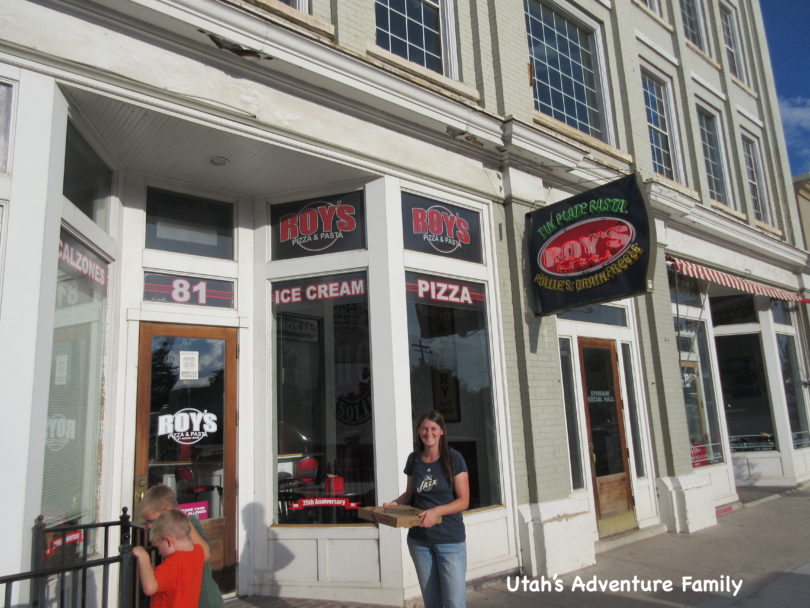 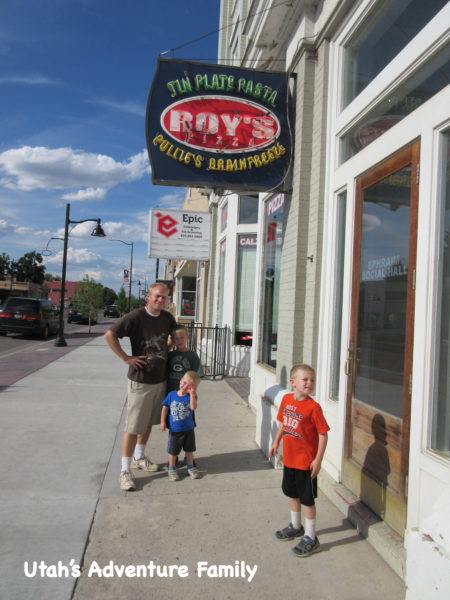 Lately we’ve been trying to give you some hints about places to eat on the road. Today we have information on our all-time favorite. Roy’s Pizza in Ephraim is our choice for best restaurant in Sanpete county, and we always stop there when we go through the valley. (We stopped by their second location in St. George, which is run by Roy’s son, and the food is just as good, so you can try it in Washington County, too.)

Roy’s Pizza was opened in 1986 as a Fat Jack’s franchise, which then changed to Roy’s about 10 years ago. Roy’s is family owned and operated, and you can stop and talk to Roy or his wife Katherine who are almost always running the pizza ovens when we stop by. 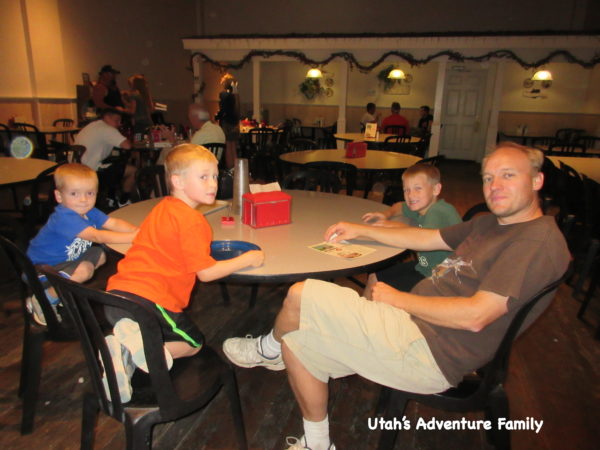 There are tables in the room where you order, but there is also a huge room behind the pizza kitchen so you can come with a crowd.

One thing we like about Roy’s is that it is more than just fabulous pizza. But the pizza really is amazing. Our favorite is pepperoni, mushroom, and sausage, and we always order twice as much as we can eat so that we can take some home for breakfast or lunch the next day. The crust is perfect, and there is a generous amount of mozzarella cheese on every slice. We really like the sausage, too. Some restaurants use those little sausage nuggets that look like dogfood– I hate those dogfood sausages!! At Roy’s the sausage is fresh, and so are the mushrooms. You have to try the mozzarella sticks, too. This is like a 10″ pizza with no sauce that you dip in marinara sauce or Ranch dressing. 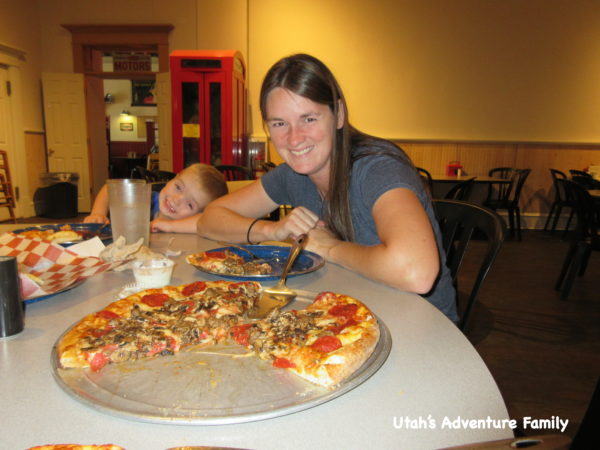 The pizza is SOOOOO good! 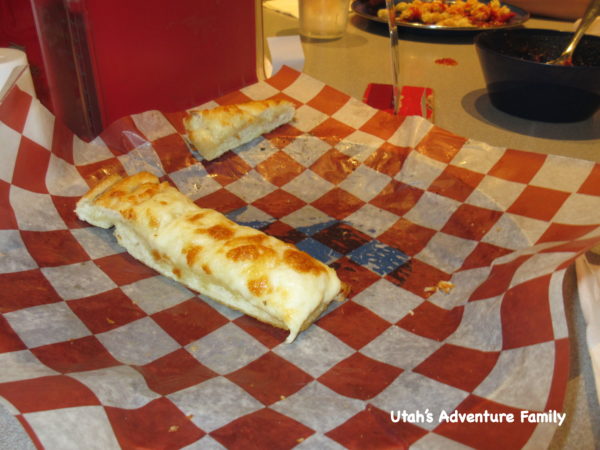 Oops, I forget to snap a picture before we devoured all the sticks with cheese!

We have one son that doesn’t eat pizza, though. (We know, we know, we think he’s weird, too). Roy’s also has pasta. We order a large pasta that our boys share, too. They are really thrilled, because it’s the only place you can get radiatori, which is their favorite. 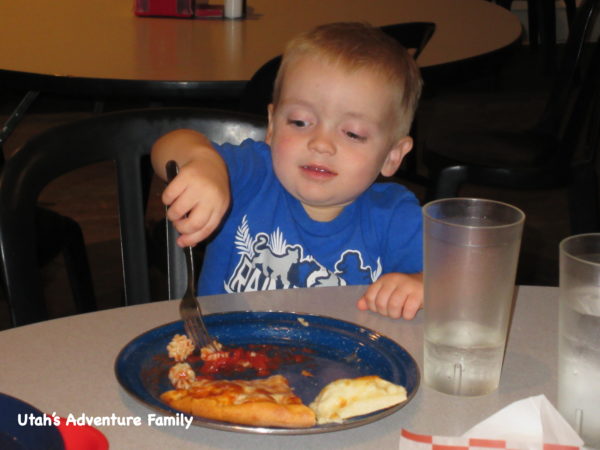 Our 3 year-old isn’t the picky one. He eats pasta, pizza, and cheese sticks!

That isn’t the end, though. Roy’s also has an ice cream parlor. You can get a cone or an old-fashioned ice cream soda. They also have fun ice cream concoctions like the James Brownie, which we had tonight. It is a combination of vanilla ice cream, brownies, whipped cream and hot fudge. It was amazing. It’s a great treat to stop by Roy’s just for the ice cream. 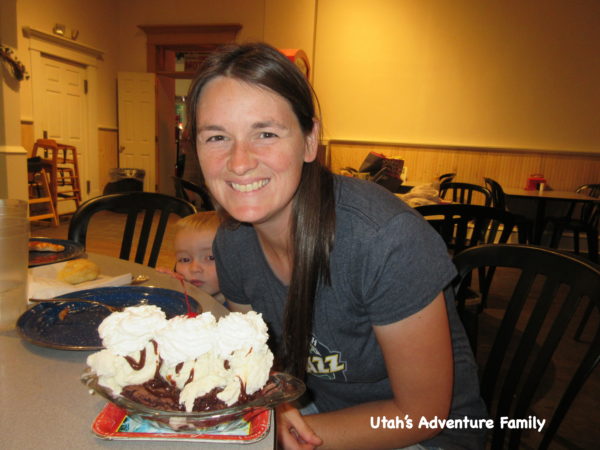 We love the James Brownie for sharing. You can also get the Little Richard which is smaller.

One more special thing at Roy’s is the candy counter. Our boys enjoy the tradition of getting penny candy at Roy’s. When Roy and his family bought the building in 1986, there was a penny candy store called Lee’s Variety that had been open as long as any local can remember. To pay tribute to the well-loved Mr. Lee, Roy’s had a penny candy counter installed, and they still sell candy, though over the last 30 years the price has increased to a whopping 3 cents for most of the pieces. 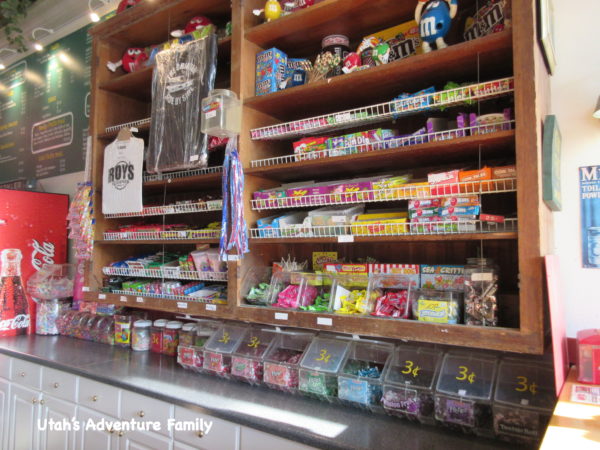 There are a ton of choices at the candy counter. 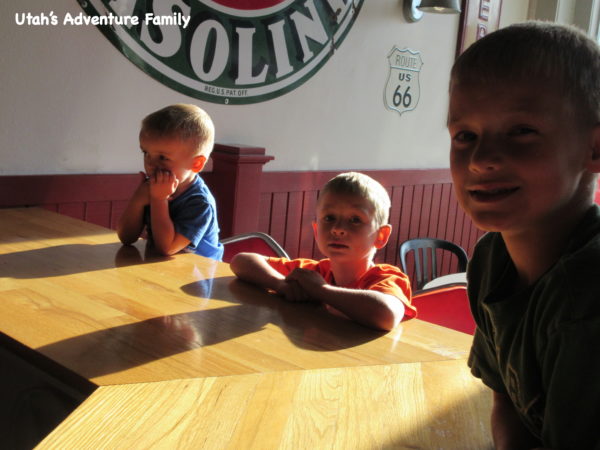 You can sit at the counter if you want, and sometimes we do when we have ice cream.

We make it a point to get to Roy’s Pizza 4-5 times a year. Usually we have to find a reason to go down to Ephraim, but it is well worth it. If you are visiting Sanpete, make sure you drop by and give it a try. Roy’s is located on the east side of the road on Main Street and almost 100 South.

*Though this may sound like a commercial, we received no compensation for this review, and the honest opinions expressed are our own.