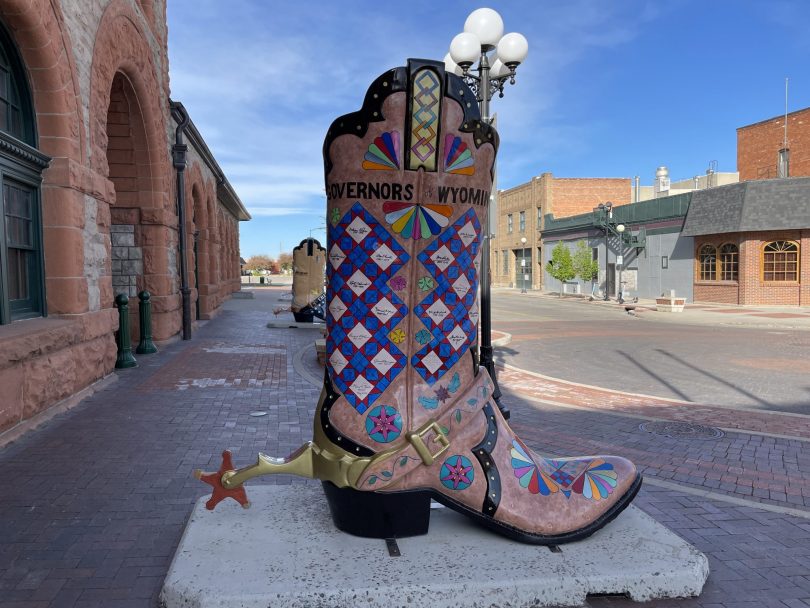 Downtown Cheyenne has some really big boots! The boots are about eight feet tall, and each is hand-painted like a mural. These boots are unique, and they give Cheyenne a bit of an artsy feel in the downtown area.

There are nearly twenty Big Boots spread throughout Cheyenne. Most are located right down on the main drive, which is called Lincolnway. You can easily obtain a map for the Big Boots from their website, but since the boots are moveable, you may spot one kicking around where it’s not supposed to be. Of course, you may expect to find one that has moved to a new location, too, which happened to us.

Our favorite Big Boots were located together in a spot called the Cheyenne Depot. This area has a beautiful historic museum with a clock tower, and, when we visited, about a third of the Cheyenne Big Boots. One of them even had a map that was hand drawn of the Oregon Trail. There were several statues to pose with as well.

This area of Cheyenne, including the Depot, actually had quite a few nice murals on walls of several of the buildings. We found this really pretty one welcoming us to Cheyenne, but there were quite a few others. Plan around an hour to drive around downtown Cheyenne and spot some Big Boots and a few murals. This city really is a nice place for an art walk!