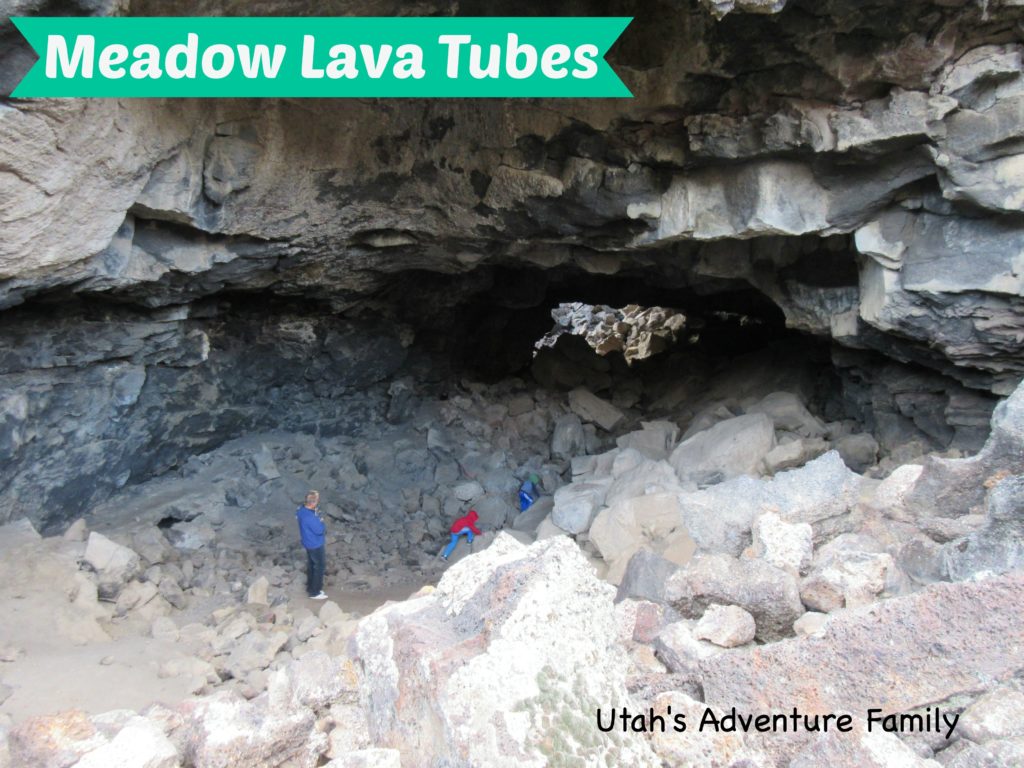 We’ve done a lot of simple caving recently. We got hooked on it after visiting Craters of the Moon National Monument. We’ve also done Ledgemere Campground Cave, Timpanogos Cave, Wind Cave near Logan, and Lehman Caves at Great Basin National Park. So naturally, when we heard about the lava tunnels near Fillmore, we put it on our calendar.

We were not disappointed with the Meadow Lava Tubes. When you get out of the car, there is a large impression in front of you (to the east). At the far end of this depression is a short dark tunnel that opens up very nicely. A flashlight, or a cell phone light is recommended, even though the cave is never entirely dark. There are plenty of trip hazards and low hanging rocks if you’re not careful. But the cave is wide and open for much of the way, and even our 2 year-old walked easily through the dark. This cave is accessible to almost anyone (you’re not getting wheels down there!) After about 75-100 yards, you’ll come up an easy climb and find yourself back at the surface.

At the west of the depression is a much longer, but more open tube. This tube stretches for half a mile or more. At first, you’ll go under the road to the west, and you can easily get by without a light at all. There are holes in the ceiling, and after a short distance, the ceiling disappears entirely. For a few hundred yards, you’ll keep passing in out of terrain like this. Then, there is a large rock field that takes some serious scrambling. After a few hundred more yards, this opens up into micro canyon, surrounded by volcanic walls.

This section of the tube is more like an easy stroll through a grassy meadow. The catch is, there is no way to climb out as the walls are sheer. After a bit of winding, a new cave opens up, and this one is a dead end. It is very dark, and you’ll definitely need light. It is about as long as the lava tube to the east, but there is no exit. After you’ve explored this area, though, you can climb out to the south (left of the entrance as you go in) and return to the car.

That’s all we had time for at the Meadow Lava Tubes, but I’m sure you could find much more if you took some time to explore. As it was, we probably walked a hard mile and half to two miles. And even though we made it safely, we saw an adult take a tumble and slice up his hip on the rocks pretty badly, so be careful!

The caves are a bit out of the way across a bumpy road, but they are well worth it. We even saw a small deer herd with two small bucks on the way out.

To get to the Meadow Lava Tubes, get off I-15 south of Fillmore at the Meadow exit and turn south onto Main Street. Follow Main to Center and turn west (right) at the sign for White Mountain. The sign says six miles, and it is actually 5.7 on a well-graded road that passes under the freeway. Take the left turn onto a little bumpier road. Follow this road 1.7 miles to a sign that says “Lava Tubes 2.” Turn left and go exactly 2 miles down the bumpiest of roads and park on the left. The depression should be right in front of your vehicle.

After the lava tubes, you may want to check out the Meadow Hot Springs. There’s a short cut. As you near the freeway underpass, you’ll come to a lightning-bolt, that is, a place where the road goes hard right and immediately hard left again. There is a right turn (south) as you are returning from the lava tubes. If you get to the lightning bolt, you’ve gone too far. Turn right and follow the road to a T. Turn right again, and you’ll get to the Hot Springs 3.7 miles from the turnoff. (There are alternate directions on the link to Meadow Hot Springs).

And for the best food ever after this long adventure, check out Cluff’s in Fillmore. Their fries and hot fudge shakes are to die for!

There are some fun historical sites nearby, too. Check out the Territorial State House or Cove Fort when you are near Fillmore.

Things to do NEAR Zion National Park