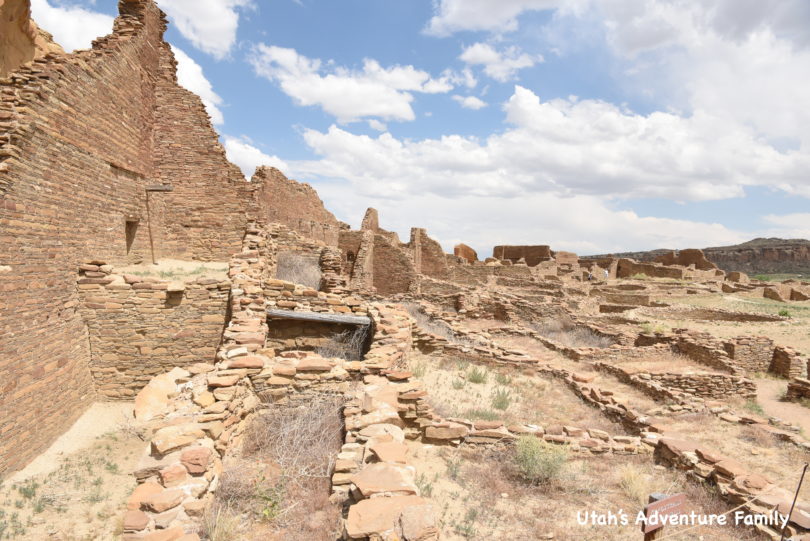 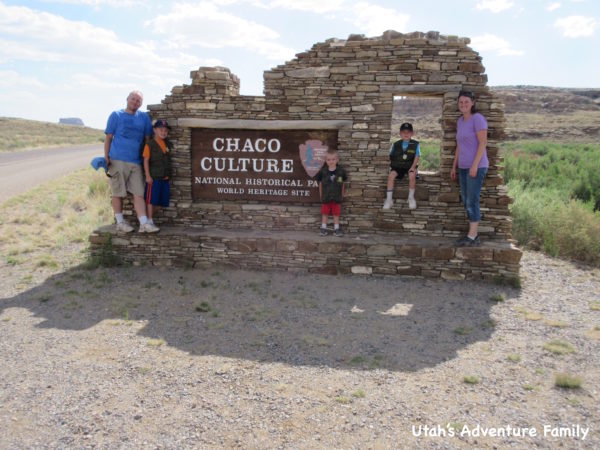 Chaco Culture National Historical Park is one of three major sites in the Four Corners area protected by the parks system along with Aztec Ruins National Monument and Mesa Verde National Park. Chaco Canyon is probably the quietest of the three sites because it is quite a trip to get there. There is a drive of about 25 miles from the small town of Nageezi, much of it on dirt roads. Also, make sure you call ahead, because there is a wash that is usually dry, but if it is flowing, not even a four-wheel drive has a chance of navigating it. 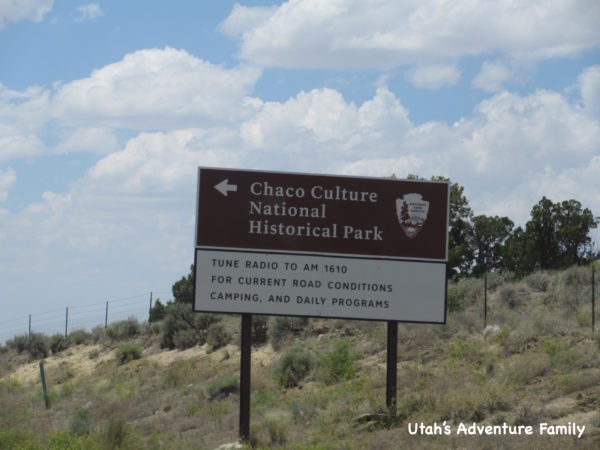 There are signs that help you get to Chaco.

Chaco is worth the trip, though. This monument has amazing example of Pueblo culture. There are several towns that you can visit and walk through. Each one has astounding architecture that is over 800 years old. In these massive cities, the masonry is extremely tight. Rock walls tower three stories high. They are tapered from bottom to top and are nearly 3 feet at the base and barely half that at the top. The builders of these walls layered large flat stones in mortar and then push smaller and smaller flat rocks into the mud. The result is a very strong tight wall that has lasted for centuries. 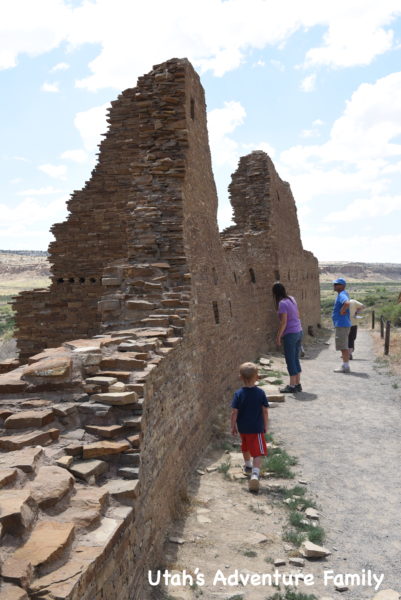 Look how thick the walls are? Amazing!

One of the key features in Chaco Canyon is the Great Kiva. This kiva is the largest known kiva in the southwest. It is probably 15 feet deep and about 60 feet across. There are three main entrances to the kiva including an underground entrance. No one is quite sure what these southwestern structures were for, though most people think they were ceremonial. 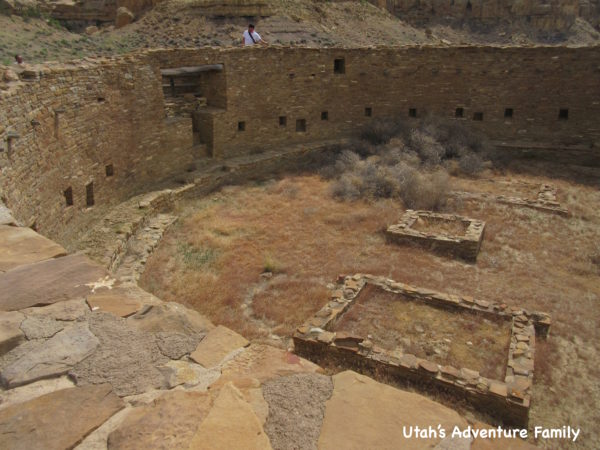 I couldn’t get the whole Kiva in one picture. It is huge!!

There are several hikes at Chaco that are family friendly, but the best ones visit the major ruin sites. Pueblo Bonita is the largest and the one that you should make sure you walk around. As long as you stay off the walls and stick to the trial you can climb above the ruin and look down in it. Then you can cross in to the ruin and go through many of the rooms. There is even one room with original ceiling material: 10 inch diameter spruce trees spaced a few feet apart, two inch diameter logs even layered atop that, and bark for thatch overlaid with mud. The builders of these structures were very thorough. 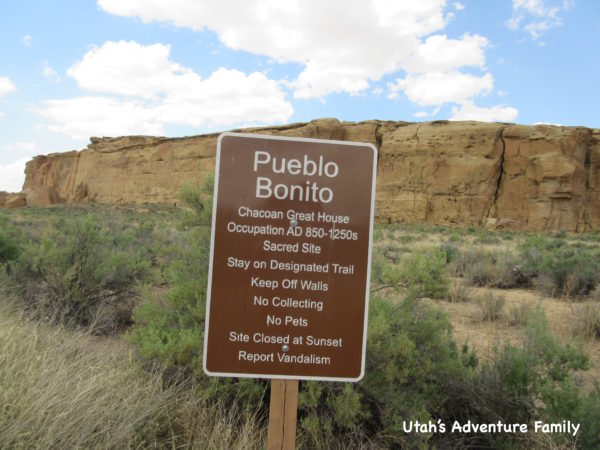 This is the biggest house area, and definitely worth the walk. 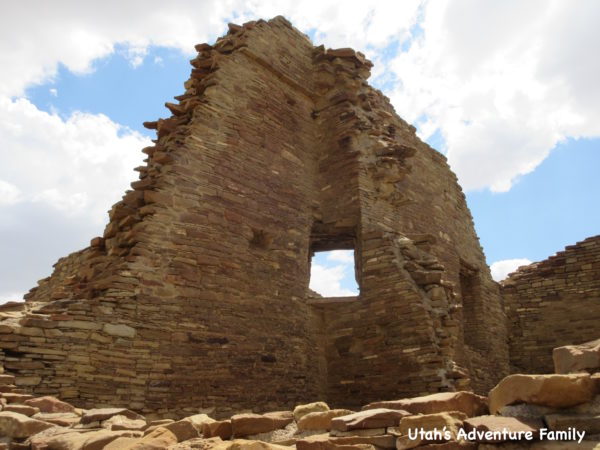 The walls are amazing. We loved seeing how they were able to build three stories tall. 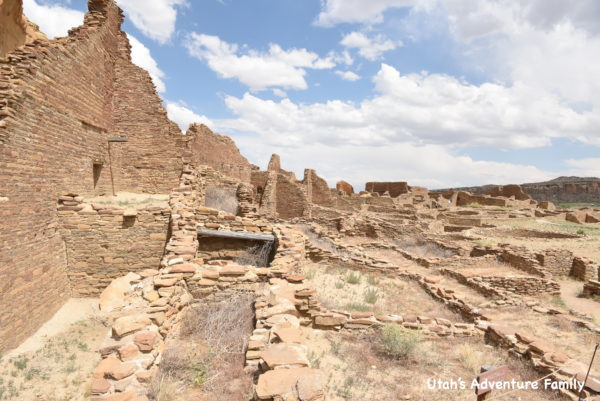 The ruins area is so large. We were truly amazed at the size. 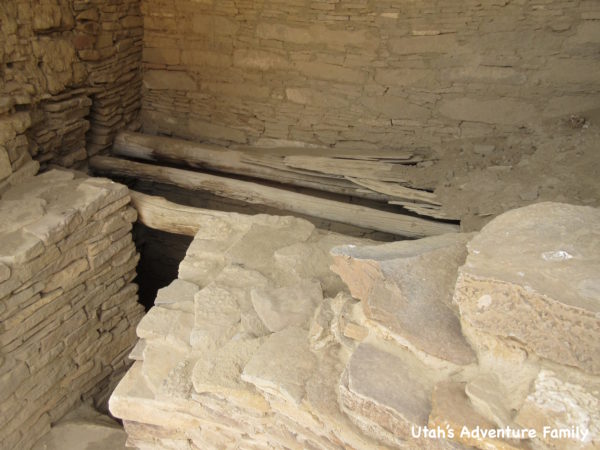 There are still some old logs that they used in their buildings. 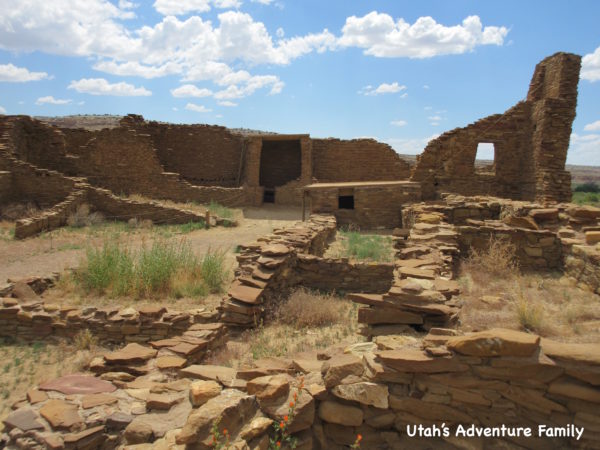 This is the oldest section of the ruin and when you get up close you can see that it’s different than the newer buildings. 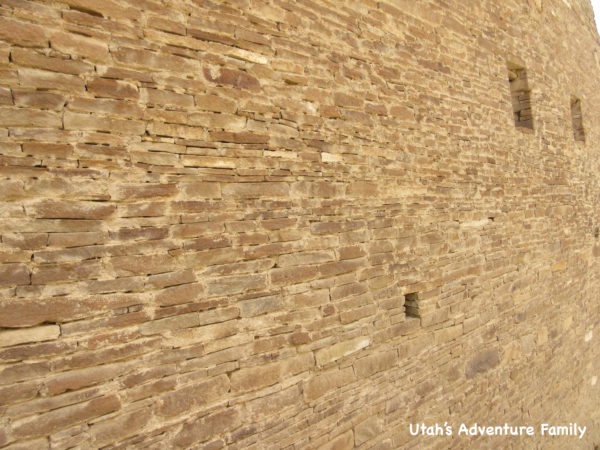 I can’t imagine how long it took to build this wall by hand. 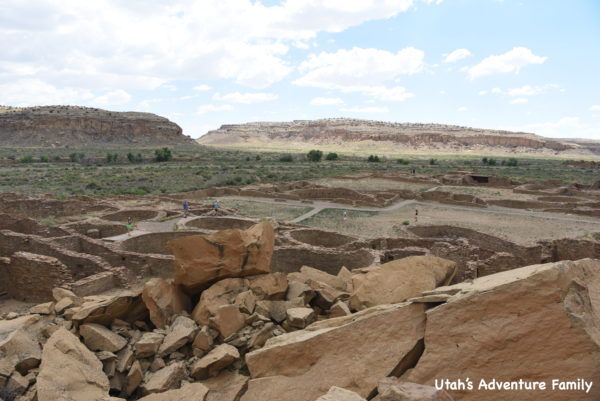 The trail walks you up to a great viewpoint of all the ruins. 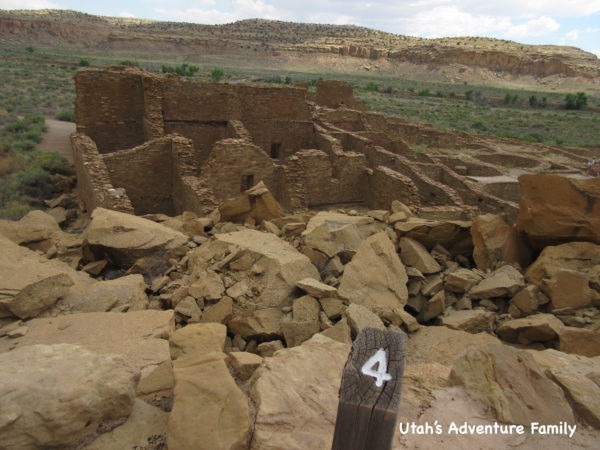 Make sure to pick up a trail guide because there is great information about the people and the ruins. 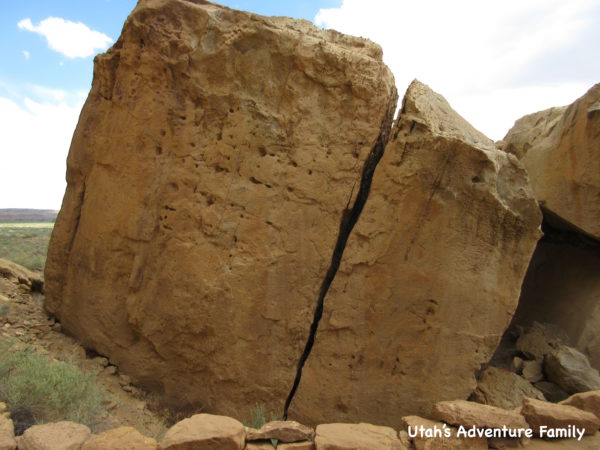 There is a massive rock that fell down and crushed a lot of the ruins about 20 years ago. The trail walks you through the area and the pamphlet explains all about it. 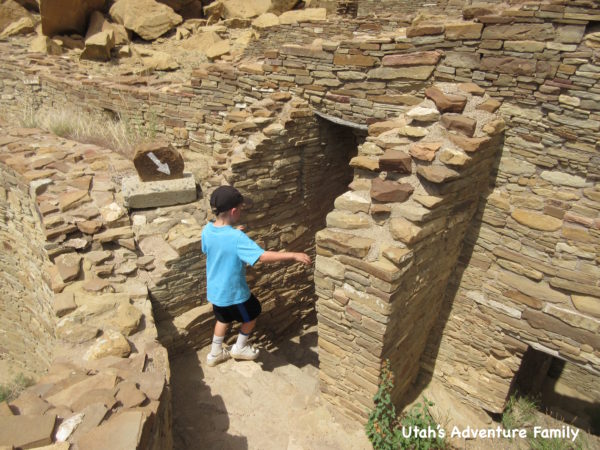 You are allowed to go inside part of the Chaco Ruins. 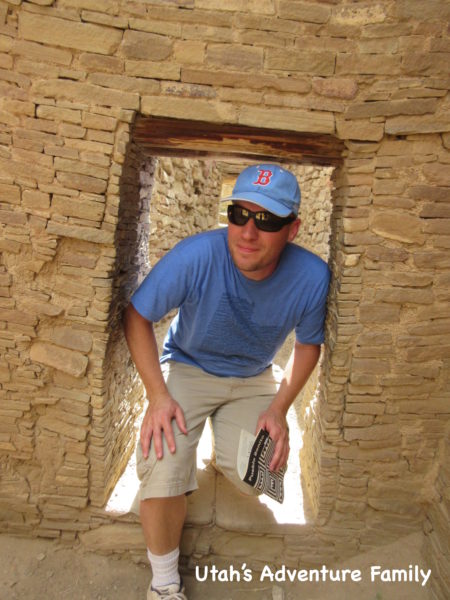 The doorways are not very big, which our children loved, but be prepared to squeeze and stoop. 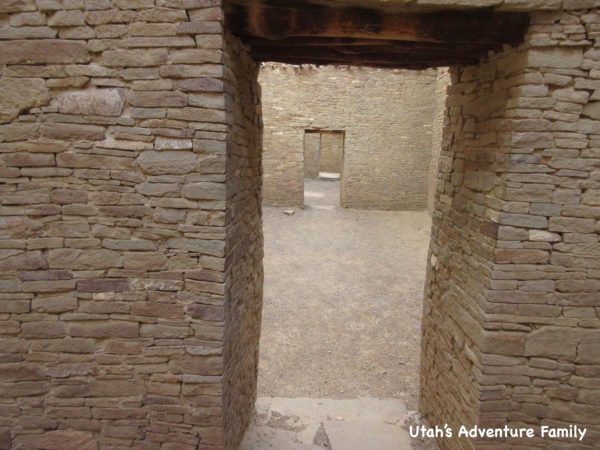 The way the doors all lined up is fascinating! 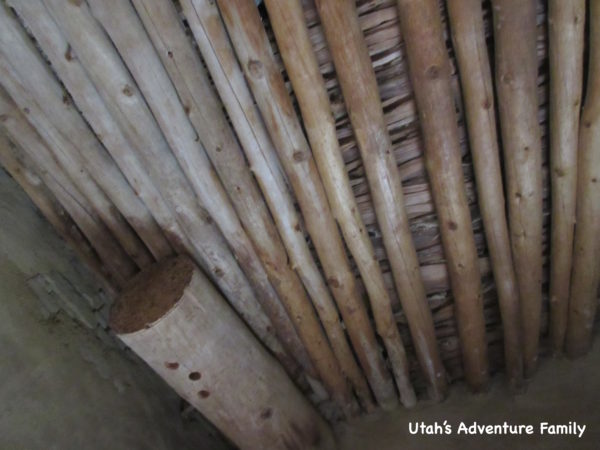 This is the preserved roof much like the one you can see at Aztec Ruins. 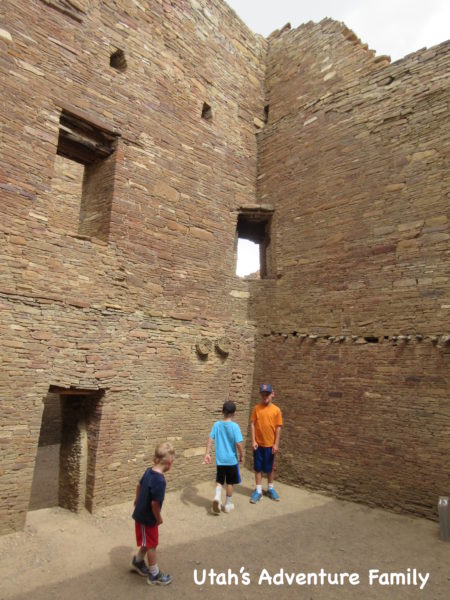 This wall is amazing! Look at all the windows and doorways that are still in tact.

Short hikes leads to several other ruins and show you much of the same kind of architecture. We took a half day and found the following village sites particularly rewarding. First, drive the one-way loop to Hungo Pavi. This is a very short walk around the village. Make sure to take a trail guide, which points out the stairway carved into the cliff above you. 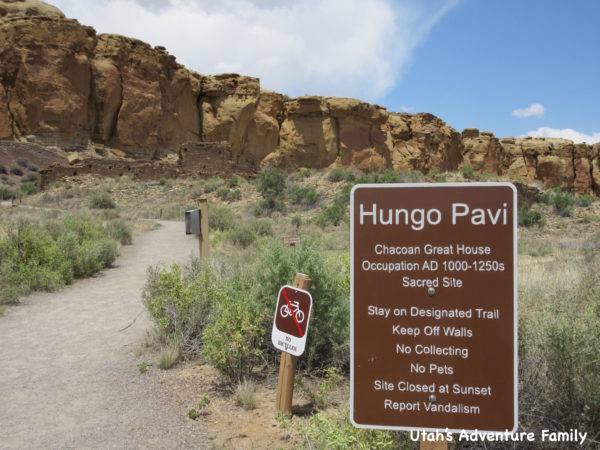 The Hungo Pavi ruin isn’t very large, but its worth walking around. 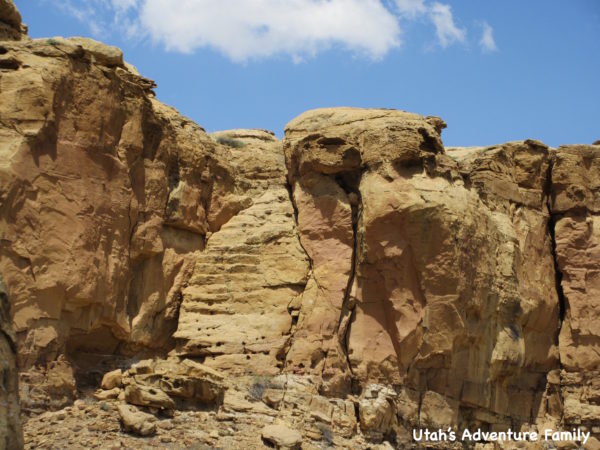 Those are actually stairs carved into the mountainside. 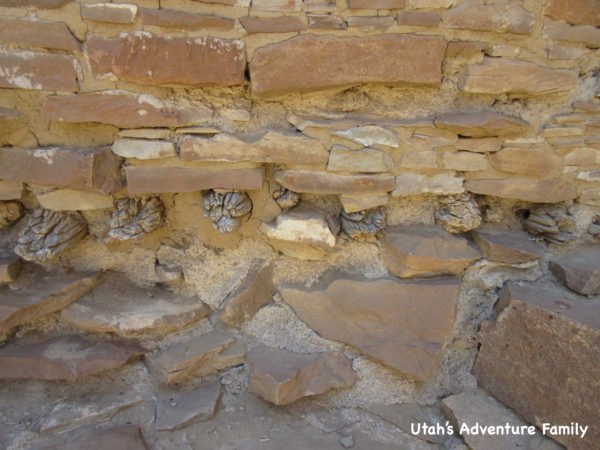 It was so interesting to see the workmanship at Chaco Culture National Historical Park.

A few miles further up the road, make sure you spend most of your time at Pueblo Bonita. A short walk along the cliffside passes a few petroglyphs and leads to another small village called Chetro Ketl. This hike is flat and easy, but you could skip it if you are short on time. The other stop that is a must is Casa Riconada. You’ll need to walk to the top of the low rise to see the Great Kiva. 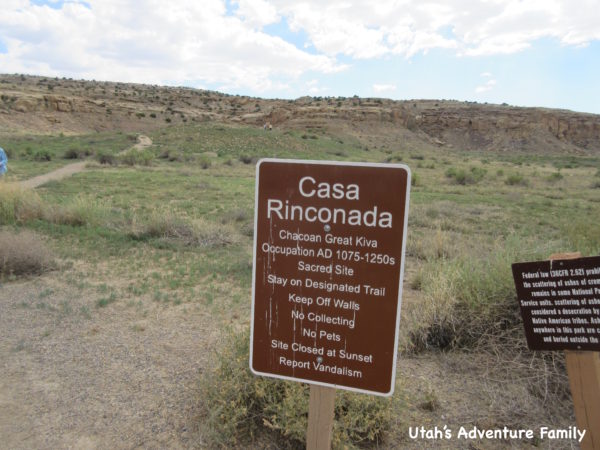 Stop here and walk up to the great Kiva. There are some other smaller ruins that you can walk around to, but our kids legs were burned out, so we went to the Kiva and back. 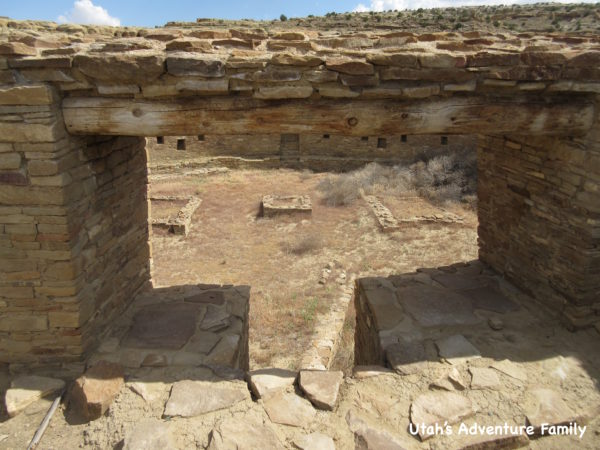 You can look into the great Kiva on either side. What in the world were they doing here? 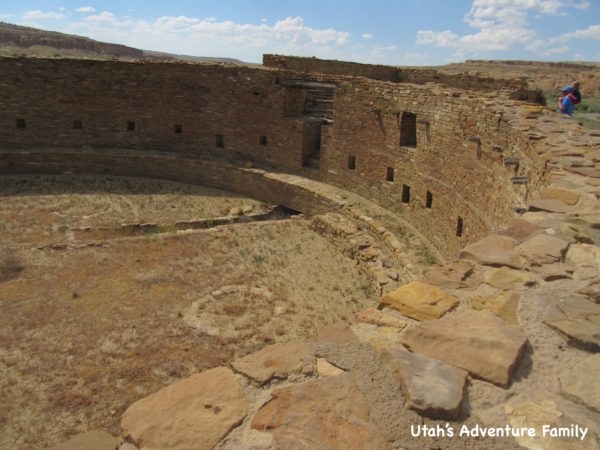 The sheer size of the Kiva is very impressive!

We also stopped at Pueblo Del Arroyo which is a smaller ruin between Pueblo Bonito and the Great Kiva stop. The ruins here were just as interesting and impressive as the other stops, and there was one storage room that we had to crawl into to see. We spent a few minutes walking around this area, and saw lots of rooms and smaller kivas. 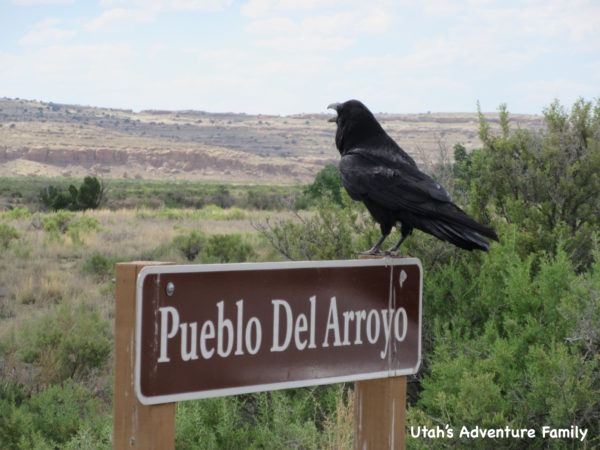 This ruin is smaller, but still worth seeing. 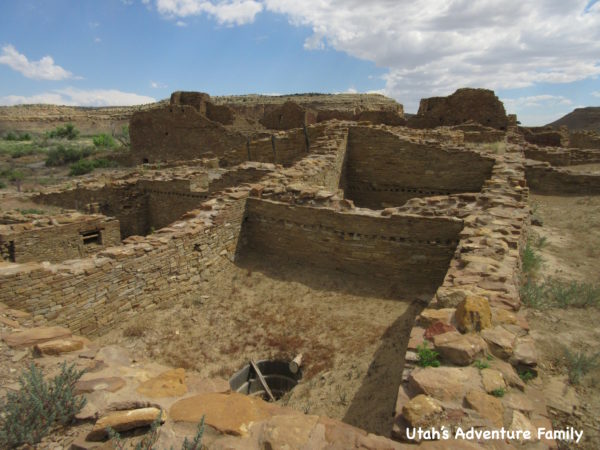 It looks like the ruins are one big building. 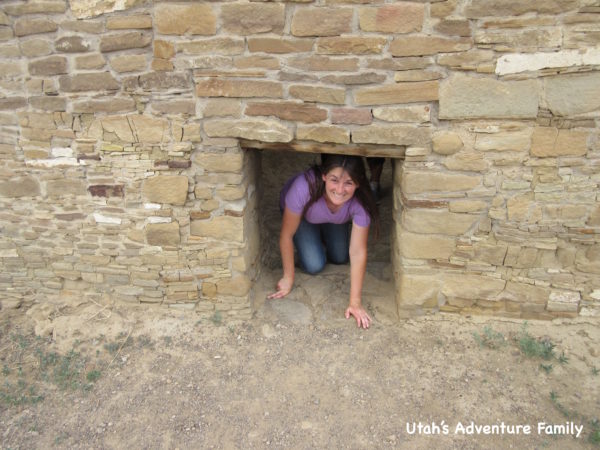 That’s me crawling out of the storage room. Our kids thought this was the best!

Our boys really enjoyed Chaco Culture National Historical Park. They earned Junior Ranger badges and learned a lot about the people who lived in this area a thousand years ago.