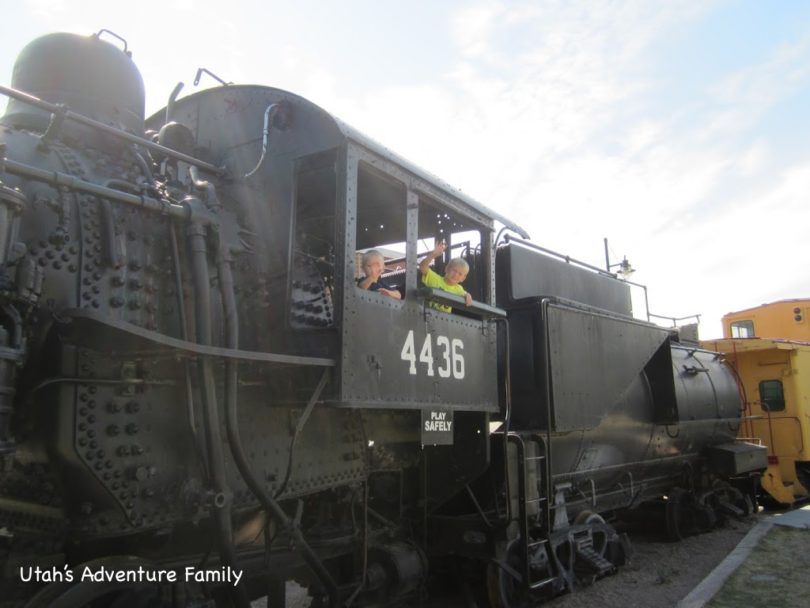 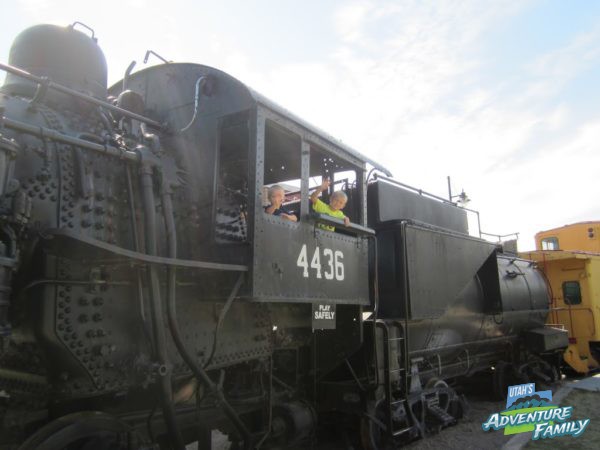 Union Station in Ogden is a rebuilt train depot that houses 4 museums. The great thing about Union Station is that you pay one fee, and you get to go to all of them. And with the price being $5/adult, $3/children 3 and up, we felt like it was quite a deal–only $1/museum. Also, they have a special Family Day Pass where for $15, 2 adults and up to 8 dependent children can visit the museums. That’s a great deal!

Here’s a rundown of each of the museums and what we liked best:

The Cowboy Museum: This is a new addition to Union Station. It is a very small display in a single room that houses old artifacts from Ogden’s rodeos. There are also horseback riding implements like stirrups, chaps, and saddles. We think this may grow into a full-grown museum, but for now it is in its development phase. 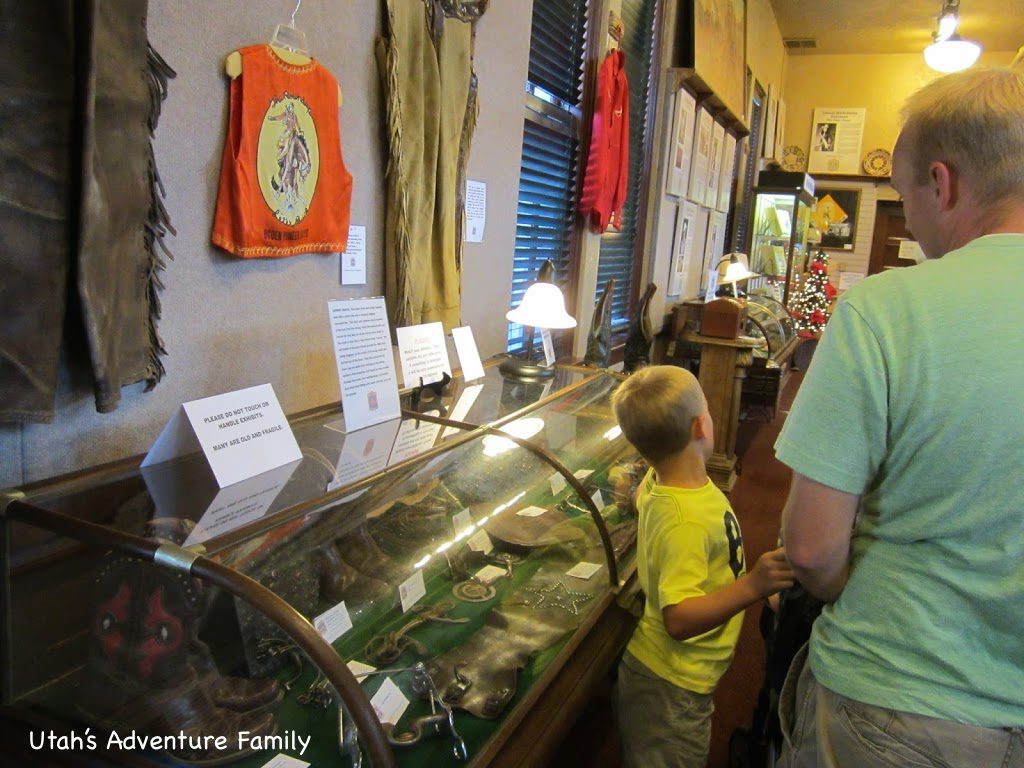 The Browning Firearms Museum: We didn’t visit this museum for 2 reasons. First, our stroller wouldn’t easily manage the stairs, second, we are not really firearms enthusiasts.

The Classic Car Museum: This section of Union Station was really cool. Inside the museum are about 15 classic cars, all from the first 30 years of the 20th century. There is a sweet mobster car that you half expect Al Capone to shoot a machine gun out of. There is a classic Model-T, and there is even a horseless carriage from 1901. We’d never seen anything like it. It looked like an old buggy (the horse-drawn kind), but behind the seat was a box. In the center “console” was a handle you could turn right or left. Though it’s only a 20 minute stop, our boys loved the Classic Car Museum.

Inside the Car Museum…the old cars were fascinating. 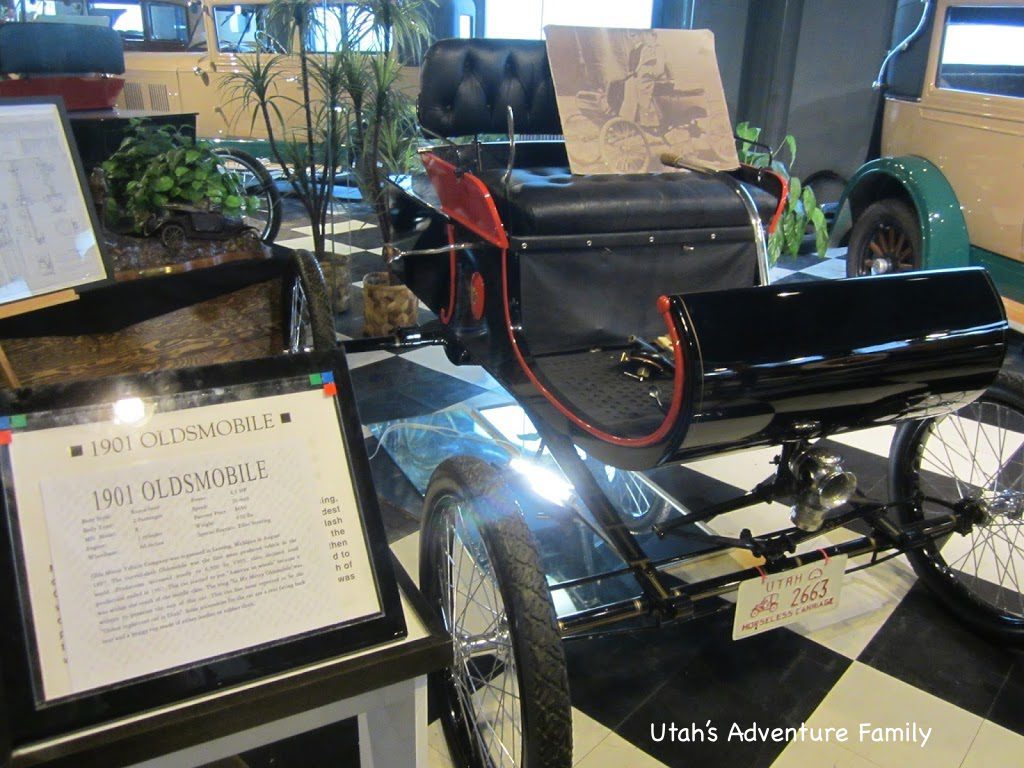 We loved looking at this 1901 horseless carriage.
I wouldn’t have felt too safe riding around in this.

The Utah State Railroad Museum: This is the crown jewel of Union Station– what with it being an old train station and all. You can actually start outside. On both ends of the property there are retired locomotives that give you a close-up view. Inside the museum is even more fun. We walked through a replica train car, visited exhibits on the Golden Spike, the transcontinental railroad, the telegraph, and other fun things. Our kids liked all of those items, but they mostly liked the last section of the museum. A huge model train snakes its way through a series of glass cases– over trestles, into caves, through train yards, and across landscapes rendered in minute detail. Our kids watched the trains go in and out of each glass case, running to see where it would come out next. Then they began to search each case: “There’s a tiny moose! . . . I found a coyote! . . . These guys have a campfire!” Even our baby quivered with anticipation when the train whistle sounded and it came chugging out of the tunnel.

There was one more section to Union Station that featured local art displays and is probably regularly changed– sort of a free display for folks in and around Ogden. This museum is open Monday through Saturday, 10 am -5 pm.

If you find yourself in Ogden, Union Station is a great place to stop for an hour or two! 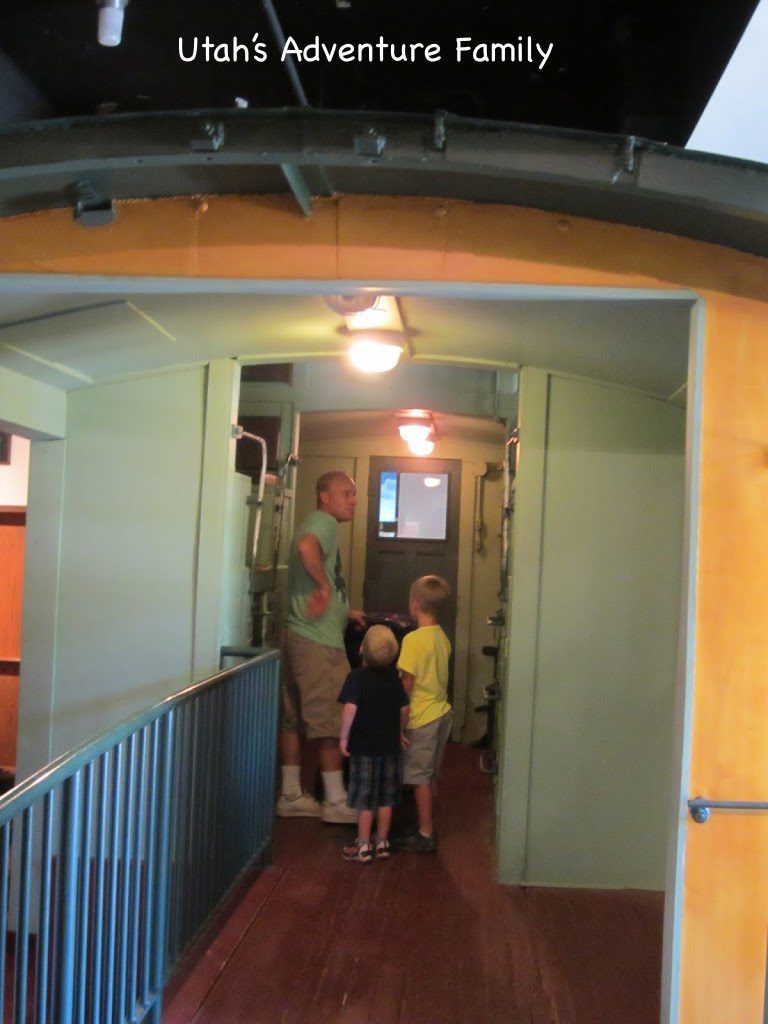 An old train car in the museum. 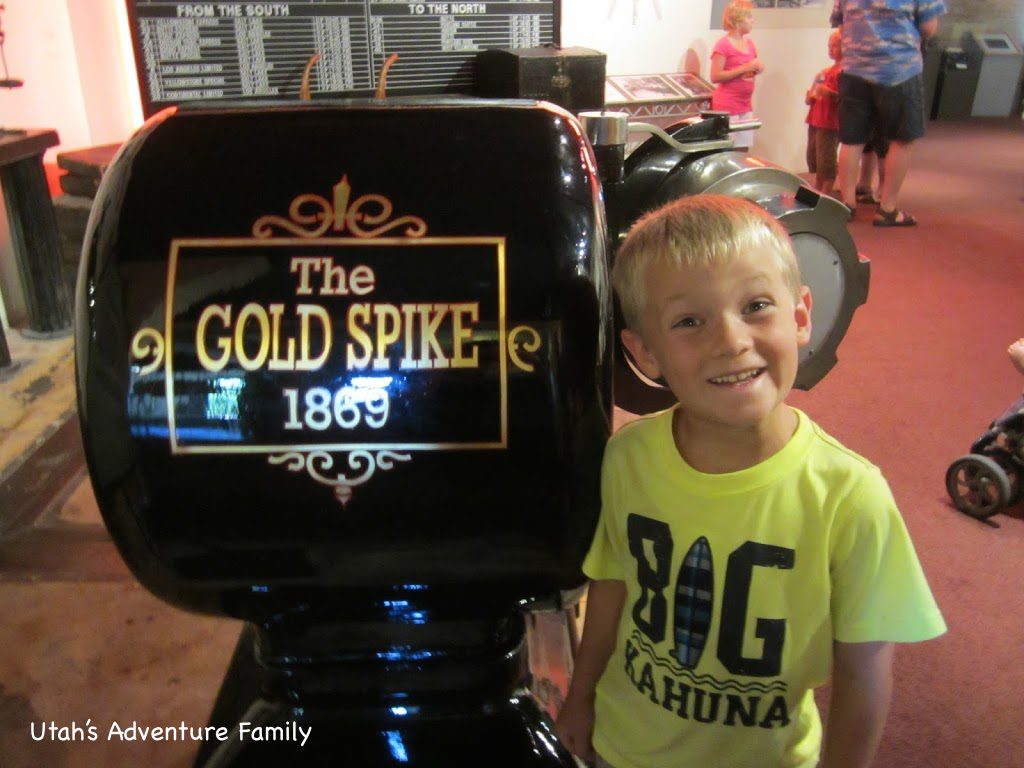 This safe held the actual golden spike until it was placed in a museum. 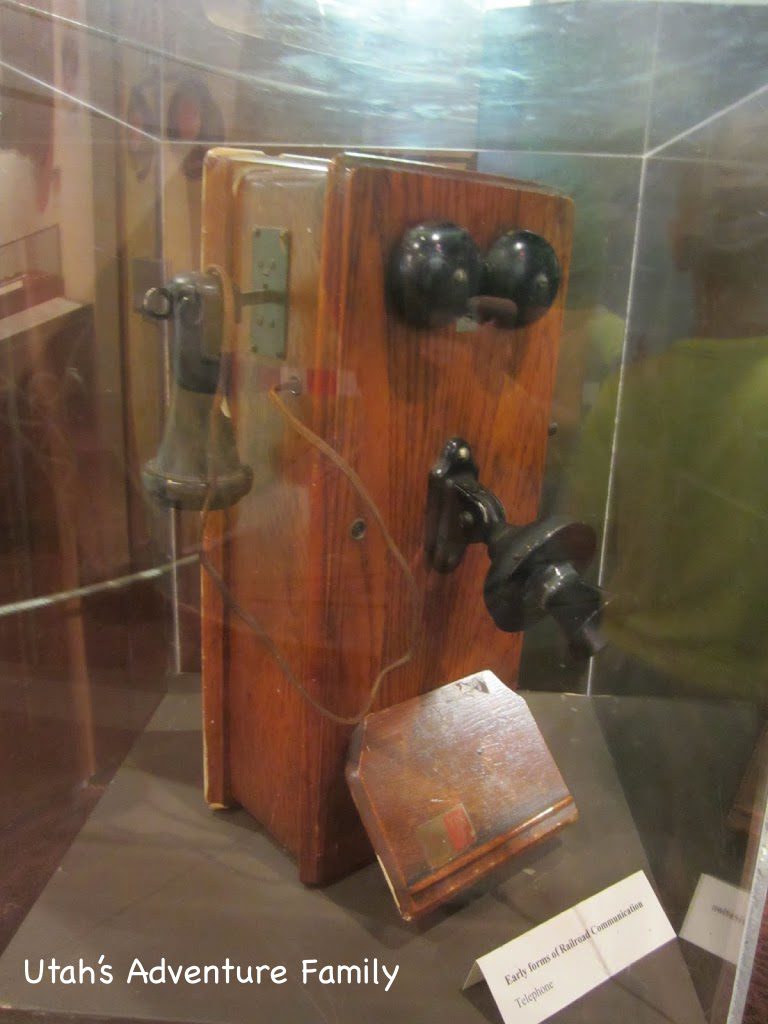 Our boys had no idea what this was. 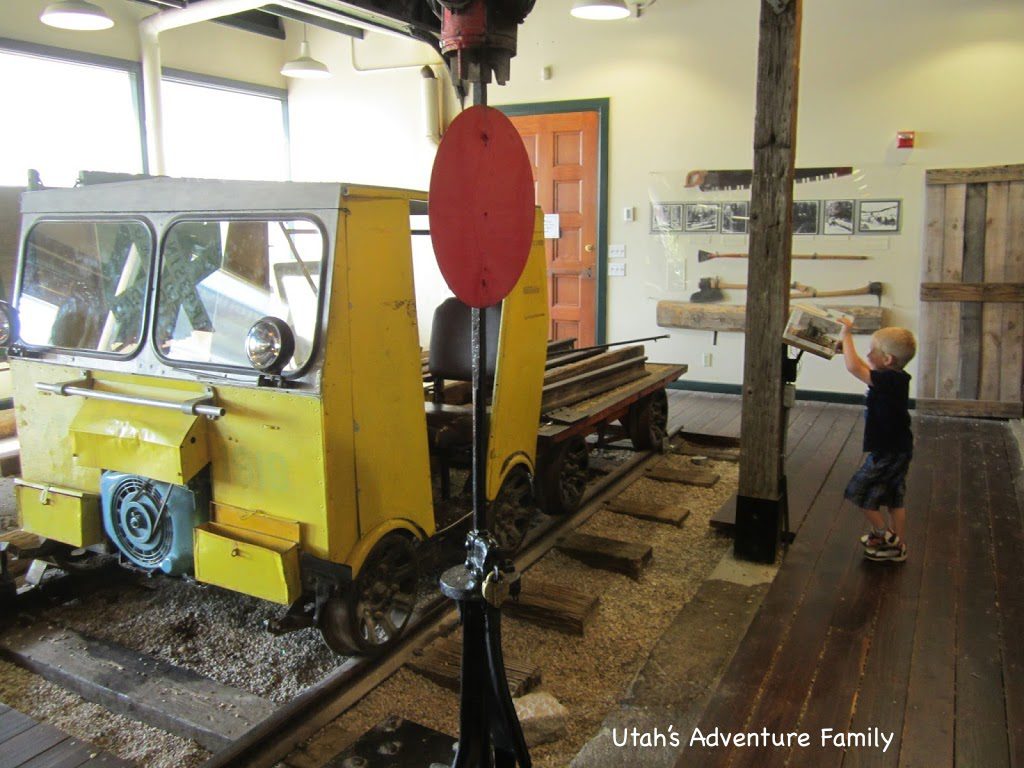 We liked typing messages on the telegraph. They also had a train table in here to play on. 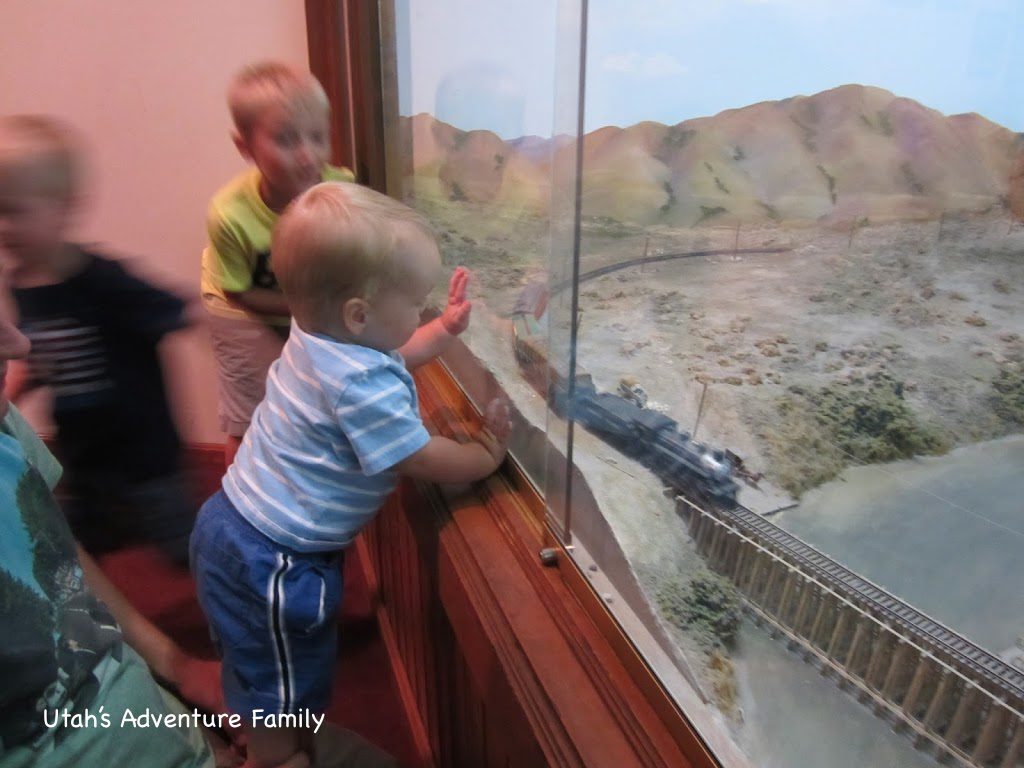 Their favorite part: Watching the train. 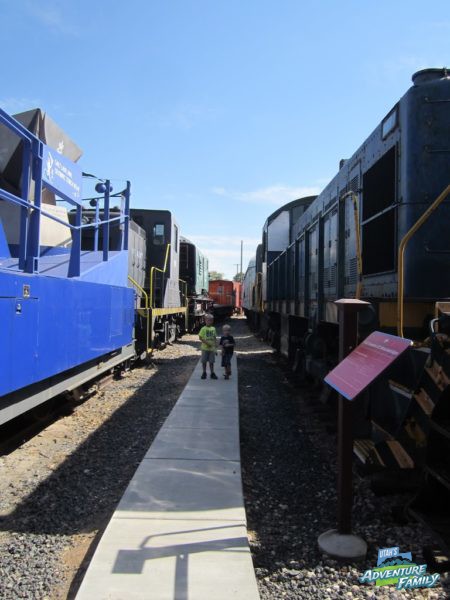 On the south side, there are lots of train engines and cars to look at.
Don’t climb on this exhibit. We liked that you can walk right next to them
even though you feel very small in comparison. 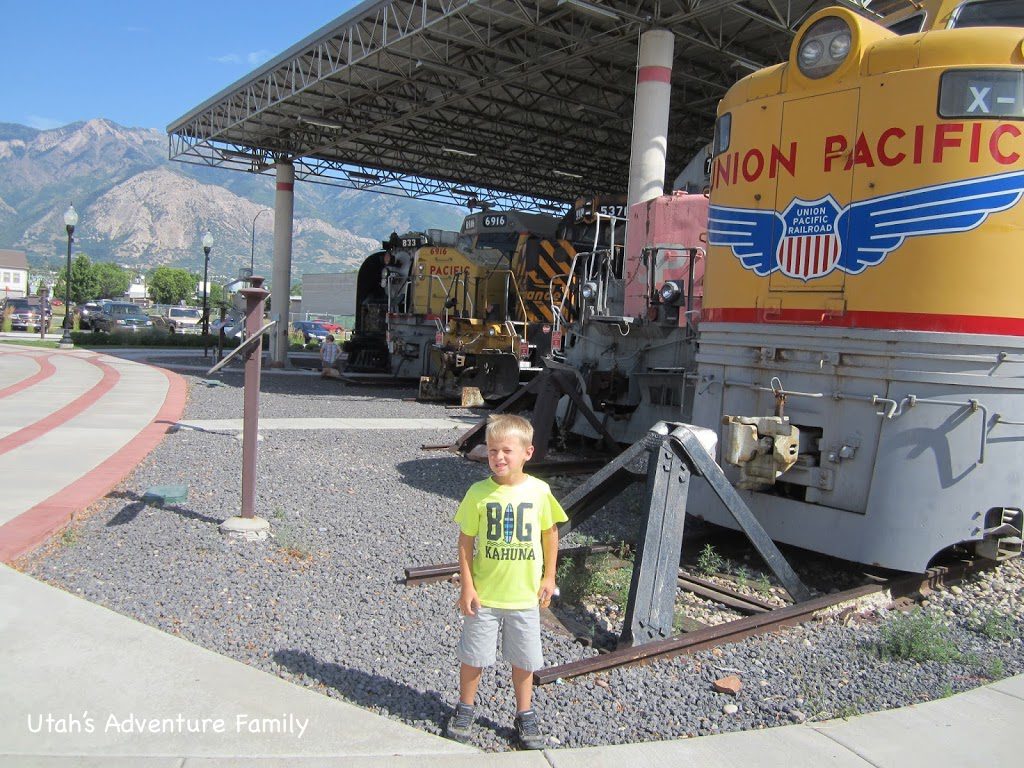 One of the big engines on display.