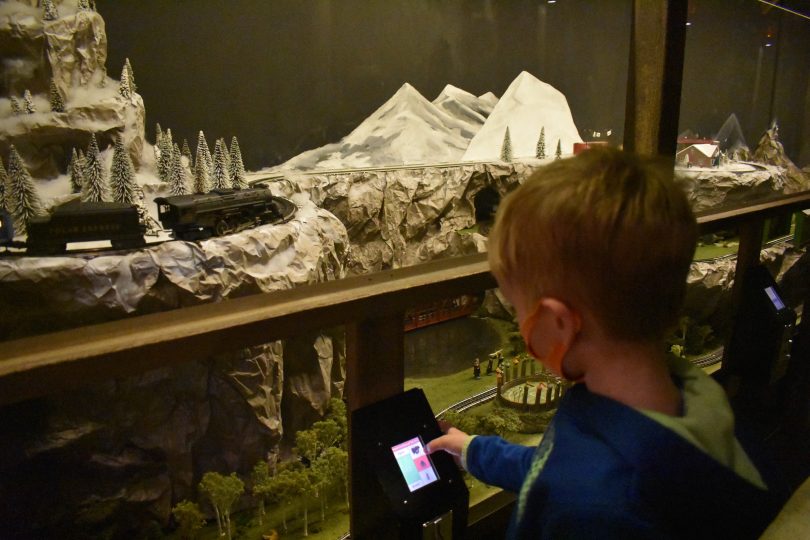 ***The Train Shoppe has moved locations to Gardner Village. They do not have their trains set up right now, but we will update this post as soon as they have their new location all set to go! For more information, check out their website.

One of our favorite indoor adventures is The Train Shoppe in Salt Lake City. For just a few dollars, our family has a ton of fun driving trains and getting out of the house together for a few minutes. This is a great winter adventure.

The Train Shoppe is an actual store where you can purchase model train items and other items. When you first walk in you will see a store full of model trains and other gadgets for train aficianodos, but look for the sign on the back wall that says “To Trains.” Head that way and have fun!

You will walk into an old west town called Salty Gulch with a large train track in front of you with model trains. When we visited the room was set up for Christmas, but it is usually an old west town and in October they have a haunted display. They also have another room with some smaller model trains. The cool thing about all these trains is that you can control the trains for a quarter.

You will need to purchase tokens. They have a machine that accepts quarters or bills. Use these tokens to control the trains. One token (25 cents) equals two minutes of driving fun! Once you put your token in, a small touch screen turns on and you can control the speed of the train, ring the bell, blow the whistle, and turn on the train’s lights. We put a token into almost every machine that was there and I’m sure we could have spent a lot more quarters. The small room has about 10 trains to drive, and the larger Salty Gulch as three. Our boys had so much fun!

There used to be is a small train for your family to ride on, but now it is just a photo opportunity.

The Train Shoppe also has some small rides: a merry-go-round, a car, a wagon, and a small shooting game. These rides cost 2 tokens each, and my boys were more interested in driving the trains than the rides, but we did do one ride each. You can also have birthday parties here. They have three small rooms that you can rent out which would be perfect for your train lovers next birthday.

You can visit the Train Shoppe any day and drive the miniature trains. So grab a roll of quarters or a few dollars, and head up to Salty Gulch in the Train Shoppe located at 2964 S State St in Salt Lake City.