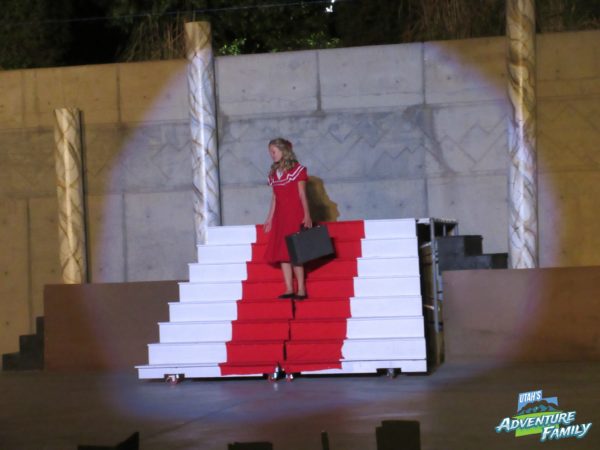 We had the opportunity to attend a production of Annie at the Salt Lake Community College amphitheater. This show was put on by the South Valley Youth Theater Group, which is a local acting troupe. The production was really nicely done, and our boys loved the show.

South Valley Youth Theater began in 2012 when two moms decided they wanted to create a quality youth theater experience for the kids in their community, and their own children. Their mission is to provide theater arts experiences for all youth, regardless of ability. They have put on quite a number of shows over the years, and we reviewed Pirates of Penzance for Enjoy Utah a few years ago. This year we really enjoyed their production of Annie.

We were surprised at the level of quality of this show. The set was really nice, and there was a good sound system so we could hear the actors. The only part of the show that was a little disappointing was when the microphones would cut out, but that didn’t seem to affect the cast. They continued on and projected as best they could.

The youth cast was impressive, too. All the actors in the show were under 18, and many of the youngest orphans were barely more than toddlers. Still, the show was very nicely acted, and the songs were beautiful. We were really impressed at the accompanist because he was a youth performer as well, and he played the score perfectly. He was amazing.

Annie is being performed at the Salt Lake Community College Alder Amphitheater, which is an outdoor venue. There are bleacher benches, but we took blankets to sit on, and we were grateful for them because we went on a very cold night. Even though it was super cold, our boys insisted on staying to the end of the show.

Our favorite actors were Rooster, Miss Hannigan, and Annie, all of whom were played by teenagers. It was surprising to see so much talent in such young artists. We’d gladly go so a show like this again; especially a family-friendly show like Annie.

South Valley Youth Theater also has some concessions. We bought some popcorn and candy, but they also had chips and drinks. Most items for $1. We also brought a few of our own snacks, as well as our own water bottles.

If you’d like to get your kids started in theater, or if you’re like us and just want to get your kids interested in attending theater, try South Valley Youth Theater (more info on their Facebook page) You won’t be disappointed.

Discovery Museum at the Gateway