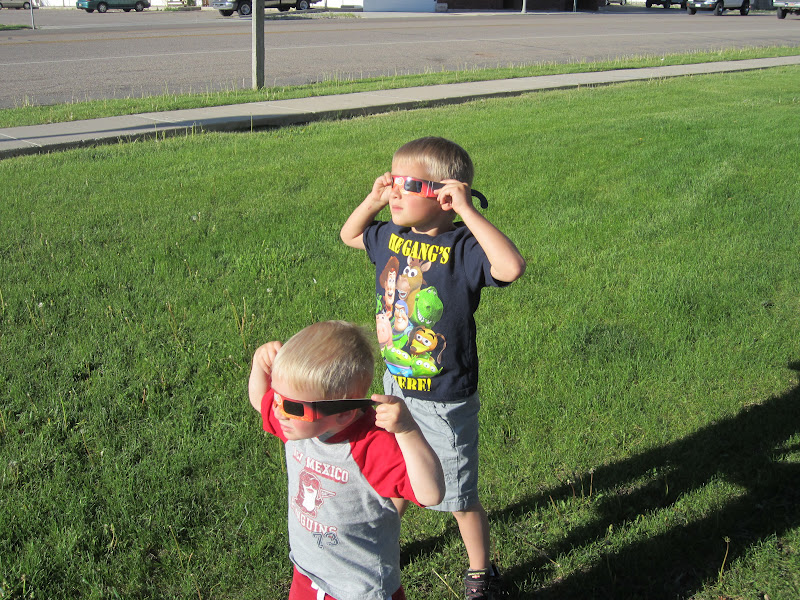 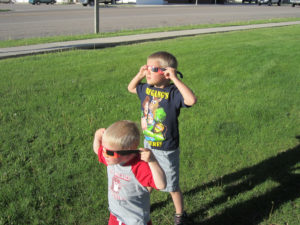 We just got back from our trip to see the solar eclipse, and it did not disappoint. We hopped in the car at about 4:15 and headed south down I-15. Our goal was to make it to Beaver because that is the first major town you come to where the eclipse is seen in totality. We had to watch first contact out the window of the van, but by 20 minutes into the eclipse we were settled at the park and making sandwiches. The moon had covered about a eighth of the sun at that point.

The boys played at the park as the moon slowly crept across the sun. Because it is an “annular” solar eclipse, the sun would not be entirely blocked. This means that the moon is too small to block the sun, but at totality is seen as a “ring of fire” around the moon. During a “total eclipse” the moon is large enough to block the sun so that the stars can be seen, but this is extremely rare. One thing that surprised us is that without the glasses, one may not even notice an eclipse was going on. It got sort of twilighty, but not to the point that you would have noticed, and you definitely couldn’t tell by looking at, or toward the sun. It was still plenty bright.

We did manage to take a few pictures, even though they say you couldn’t. We took an old camera (in case it caused any damage), held it up to the glasses and snapped a few pictures of the eclipse in different phases. We also made a short video, but seeing it won’t really give the feeling of being there and witnessing the actually eclipse.

The boys were really excited, and we had a great time. We did get home pretty late, but hey, once in a lifetime, right?