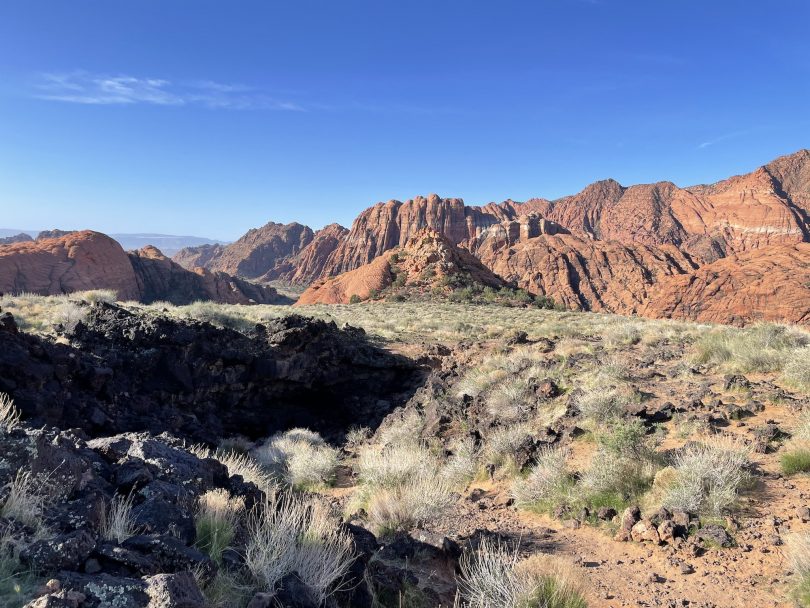 The Lava Flow Trail is a unique hike to two large lava tube caves in Snow Canyon State Park near St. George. Both Snow Canyon lava tubes are open to exploration, so make sure to take a flashlight if you plan to venture into the caves.

This trail has a large parking area at the north end of the state park. It is an out-and-back trail that passes first, a rather large lava tube, and second, a much smaller tube. The hike to the tubes is gently downhill, but there is no shade, and the sun can be brutal along the way. Luckily, the Snow Canyon lava tubes are nice and cool inside, and you can stay as long as you like. The roundtrip distance to both tubes is just 1.0 mile, not counting the exploring you do inside the lava tubes.

One thing to know is that the lava tubes are not easily accessible to everyone. The largest tube, which you come to first, requires a bit of a dangerous descent to access. You can easily walk down inside the rim, but from there, you’ll find a rather large and scary drop to the floor of the cave. By skirting around to the right, you come to a rather difficult obstacle, but with help, our kids and Mom were able to make it to the bottom of the tube. There are two directions to go once you are inside the tube. To one side is a large open cavern. It doesn’t go very far, but you can walk down a little slope and find the end of the tube after about 25 yards. You’ll need a light in this section. We even counted 6 bats in this cavern. Don’t disturb the bats.

You’ll need a flashlight for this tube, and the light on your phone really isn’t enough to be safe. Please don’t use glowsticks, though, as they damage the cave walls with their chemicals. We picked up 10 glowsticks and transported them out to the trash, even though a sign outside the tube forbids them. We picked up more along the trail, too.

If you choose to explore the cavern in the other direction, the tube is much narrower and requires a squeeze. We ventured fairly far into this section, but eventually, we came to a dropoff of about 6 feet. We knew we could get down, but getting up would be another matter, so that was the end of the road for us.

The second lava tube is located a little farther down the trail. This tube is much smaller, but still interesting. It resembles the second area described above. The entrance is much easier to navigate, but it is narrow and a squeeze is required. Our boys liked this tube, because there were a few places they could go that Mom and Dad couldn’t! This smaller tube is better for young children because it’s easier to access.

After leaving the lava tubes, you can continue further down the Lava Flow trail. We didn’t explore that way, but we did pair this trail with the Butterfly Trail. Most people hike to the Snow Canyon lava tubes as an out and back trail. Here are a few caving tips that will help you stay safe in the lava tubes: