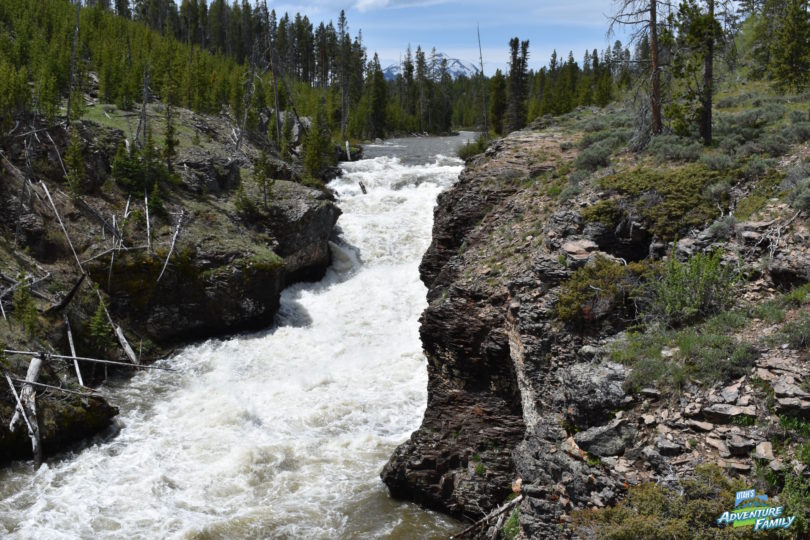 We found a little secret in Yellowstone. It is a short, unmarked hike at Sheepeater Cliff. Sheepeater Cliff in Yellowstone is a geological formation of columnar basalt that you can access from a very short drive between Norris and Mammoth. Many people pull in and park, climb the interesting cliff, spot and few marmots, and leave. Others sit at the picnic table for a short lunch break.

There is a small, unmarked trail that isn’t found in park literature leading to the right (east) along the river. When we were there in early June, the Gardner River was really rushing, so we decided to walk between the cliff and river and check it out. This 1.0 mile roundtrip trail isn’t really maintained, which meant we climbed over the occasional deadfall, but it was obvious which way we should go. After walking about a third of a mile, we even had to make a short scramble across some of the basalt rocks that had tumbled down. By then, though, we were getting excited, because we could hear the hearty roar of rushing water ahead.

As we continued along, the trail dropped into the river, which was running very high. It was okay, we just moved to our left and avoided the water. Suddenly, the river plunged downward, and the trail continued up along the cliffs. We had arrived at what we called “the chute.” It isn’t really a waterfall, but the river channel narrowed and dropped swiftly, especially with the high runoff. We continued right along the edge of the cliff, which plunged straight into the river 40 feet below. It wasn’t really dangerous, as we could stay well back from the edge, but don’t let little ones wander.

After another hundred yards or so, we turned around and caught a full glimpse of the Chute. We can’t guarantee that it is always a spectacle, but in early Spring, it was incredible. This waterfall was about 25 feet tall, and the water is really moving because of the narrowness between the cliffs. We felt as if we’d found our own little secret. Back to our left when facing the river, a valley opened up, and the river slowed and spread out. It was a perfect spot for animal viewing. We watched for awhile, and then returned the way we’d come.

Sheepeater Cliff in Yellowstone is definitely a great hike. It’s flat and easy, and the waterfall is fun to see. It’s a perfect family friendly trail! If you are looking for other kid friendly hikes in Yellowstone, check out our full list.

*Update: After doing a little research, we are finding that a few websites are calling this chute Tukuarika Falls after the Native American tribe that were called “Sheepeaters” because they drove bighorn sheep into the river.