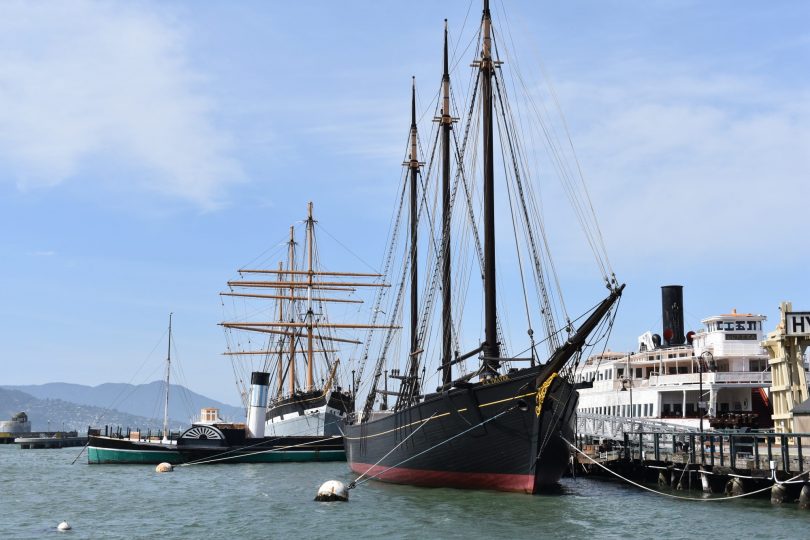 Twenty years ago, we fell in love in San Francisco. That was where we first met and spent time together, so this part of the world will always hold a special place in our hearts. We love Pier 39, Fisherman’s Wharf, and Ghiradelli Square.

On a recent trip back to the Bay, we found another fun adventure for the kids right in this area. Just down the hill from Ghiradelli is a cool little historical site called the San Francisco Maritime National Historic Site. We were able to enter for free with our National Park Pass, though normally it is $15 for adults. Children under 15 were free when we visited.

This national site probably had the smallest land area of any we visited as it is almost entirely along the pier. The big attraction is several large boats that you can tour to learn a little about life at sea. Make sure to pick up Junior Ranger booklets at the gate to keep the kids occupied as they explore the ships.

One nice thing about this national site is that there is little walking, so it works for everyone. A stroller would work pretty well, though there are a few rickety staircases that you can climb as you explore the boats.

Our favorite boat to explore was the old cargo ship that predated modern motors. Though the sails weren’t up, massive masts rise into the mist. We walked right out on the deck and explored the rigging and poopdeck. There were some displays as well, and the kids did a small scavenger hunt.

Though we were in the middle of one of the busiest places in California, there were only a handful of people at this site. There is a museum and a Visitor Center as part of this park. They are a short walk from the pier where the boats are housed, and both were closed when we visited. Check their website for hours and current information.