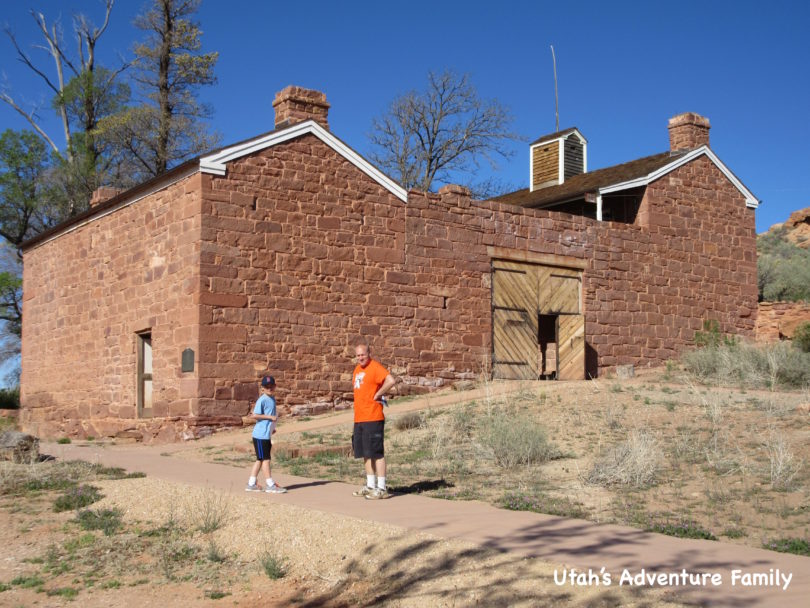 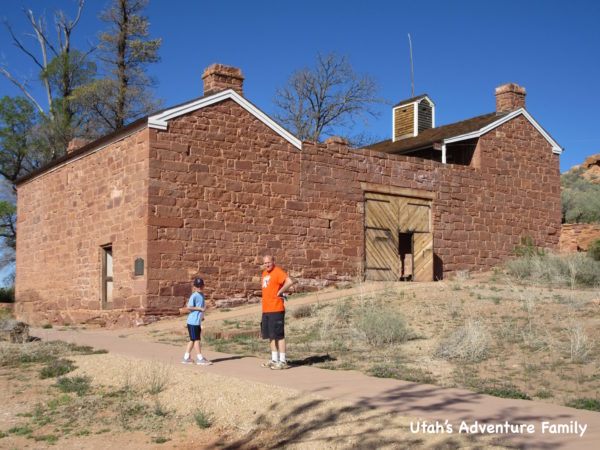 Pipe Spring is a fort that very much resembles Cove Fort in southern Utah. The history of the fort is very interesting. Our guide, a Native Paiute, called the fort Brigham’s Last Bastian. He noted that the fort wasn’t built due to fear of Indians, but as Brigham Young’s last place of escape from the federal government if they came to arrest him for his practice of polygamy. The fort is called Pipe Spring because it was built on the only natural spring in the valley, which took a major water supply from the tribes living there. Still, there were no conflicts at this fort, and though it has rifle slots for defense and a thick outer wall, they were never used. 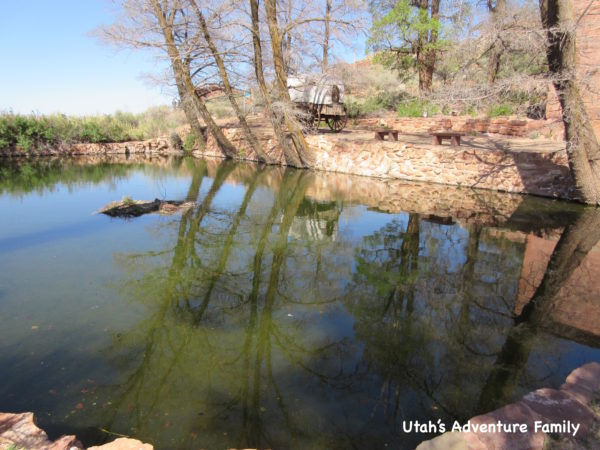 There is a guided tour of the fort, so when you arrive make sure to find out when the next tour is going to take place. We lucked out and showed up right when one starts. There are some other places to visit if you need to wait for a tour.

Up the hill from the Visitor’s Center there are a few artifacts, a small Native American camp, and even some farm animals. There are also 2 outlying buildings you can briefly stop at that were used as bunkhouses. You can spend some time admiring the water that still flows from Pipe Spring. There is also a 1/2 mile hike to an overlook of the valley. We didn’t have time to do the hike, but be prepared. It’s in the open so wear sunscreen and a hat. The main attraction, though, is the fort itself. 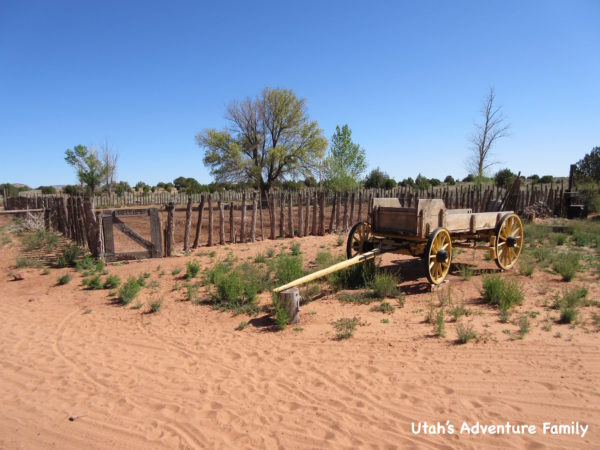 You can wander in the garden and look at the old wagons. 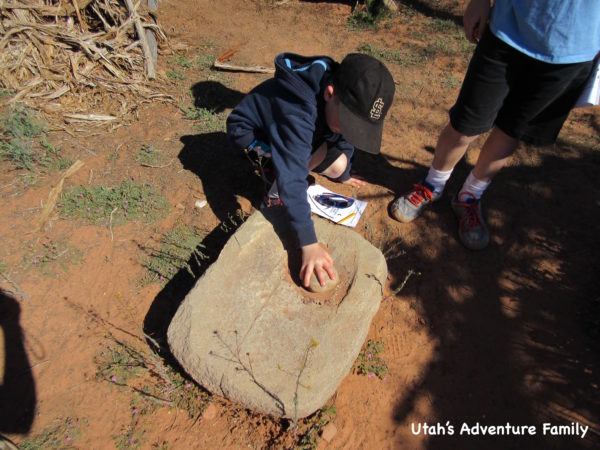 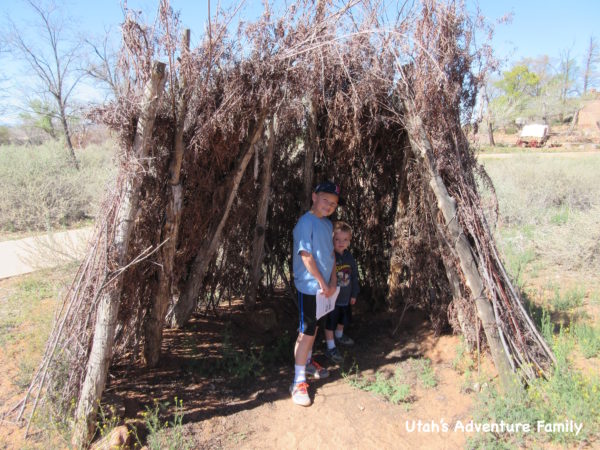 And exploring the Native American huts. 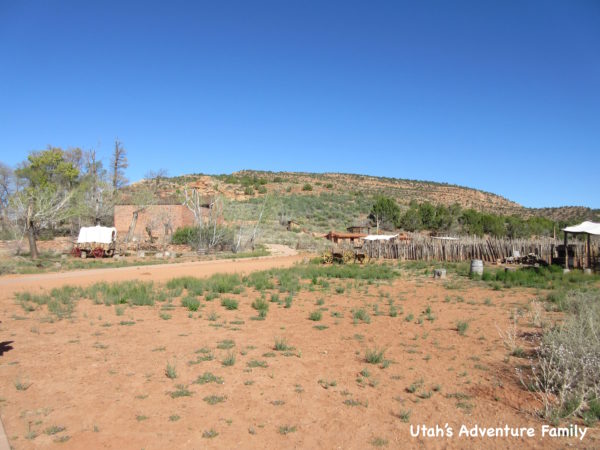 This is the view of Pipe Spring National Monument from the visitor’s center.

A guided tour takes you into the inner courtyard where you learn about the construction and purpose of the fort, which is 2 stories high. Then you’ll go through each of the rooms, including kitchen, sitting room, and bedrooms. A few things of special interest include the refrigeration room, where the spring kept things cool for the pioneers, and the telegraph office, where the first telegraph in the territory was established. There is also an old pump organ, which still functions and that we were allowed to play. We also loved that the fort was built right into the mountainside. Those rooms were very cool even in the heat of the day. 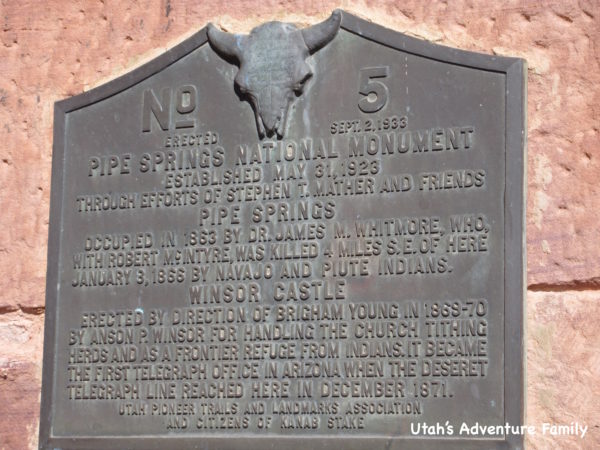 This gives a little background on Pipe Springs 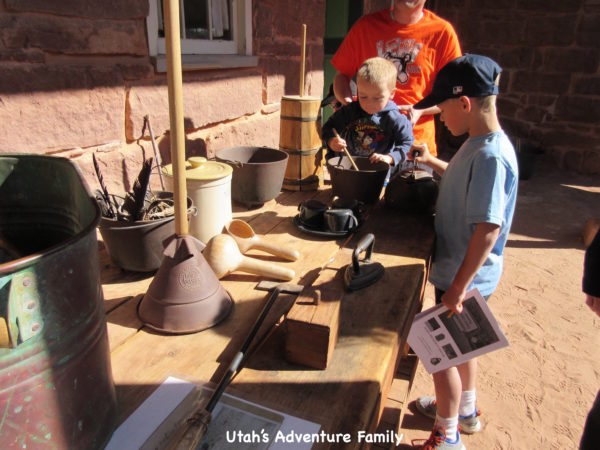 There is a fun touch table for the kids to learn more about pioneer and Native American every day life. 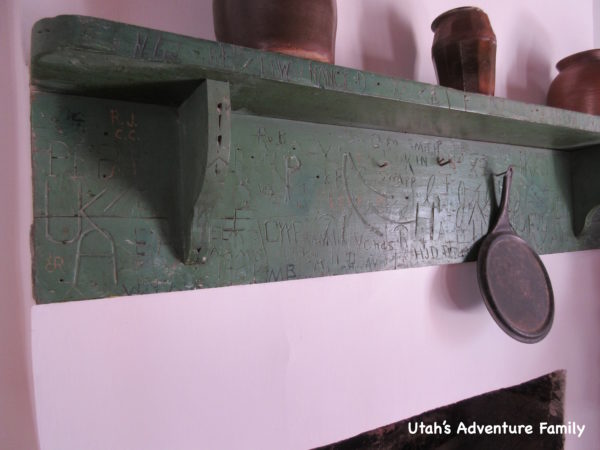 This has carvings from people who stayed at the Fort. It’s a very neat artifact that has been preserved. 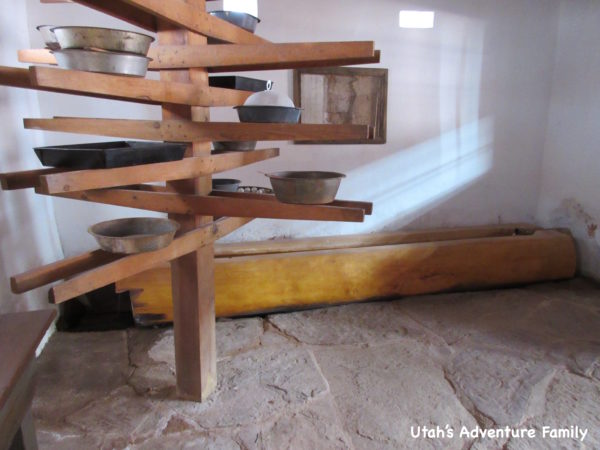 This is the refrigeration room. That trough is where the spring runs through the house and outside. 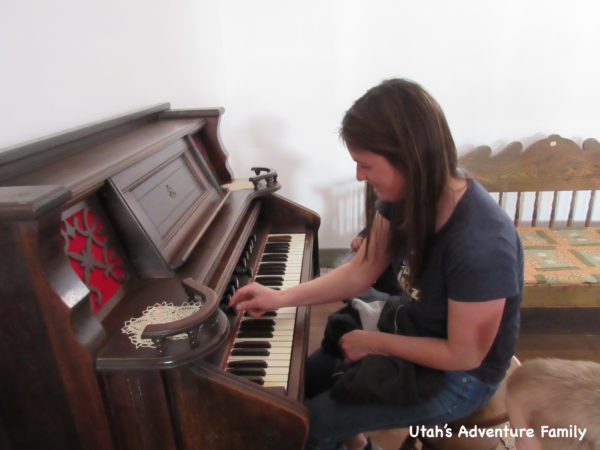 Mom got the chance to play the old pump organ that still works. 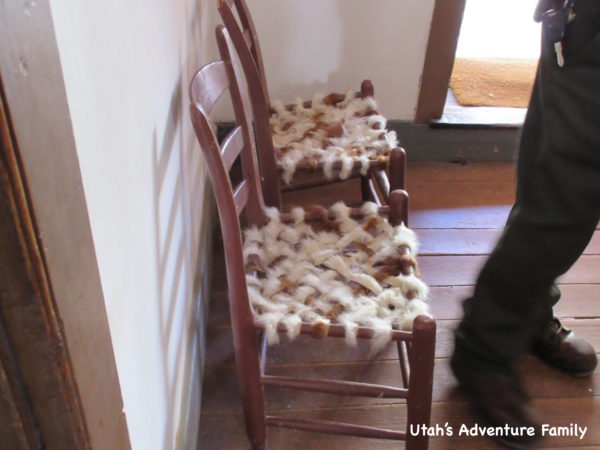 Chairs made form cowhide. It’s amazing how they wasted nothing. 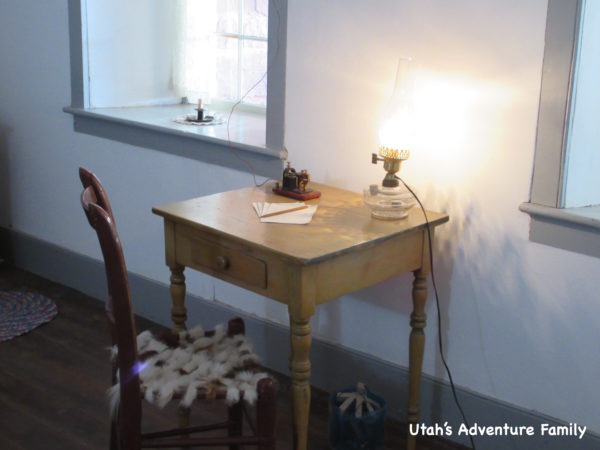 This is the telegraph office. 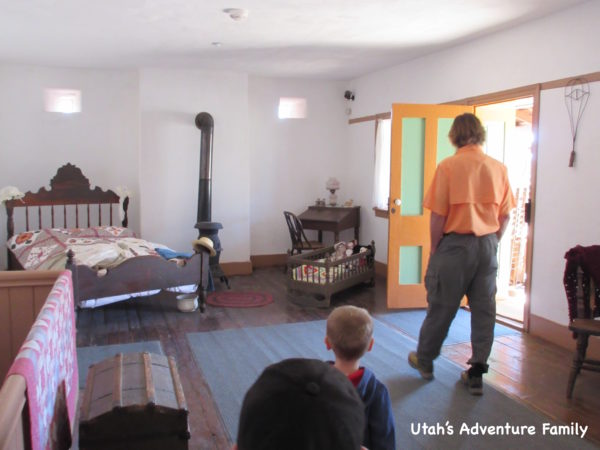 You work your way upstairs where the bedrooms are and you can look up into the tower. 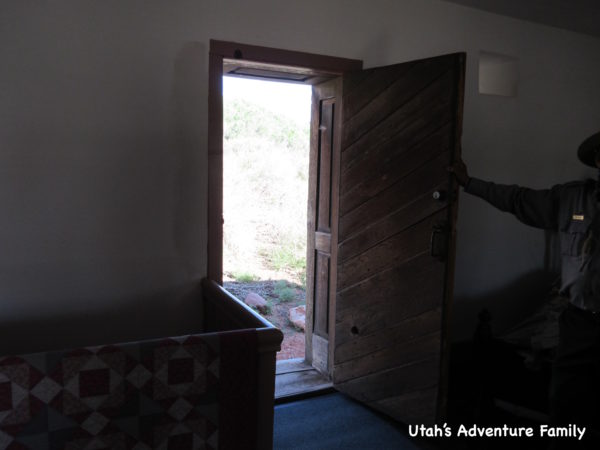 The door upstairs opens on top of the hill and the rooms below are built right into the hill. So interesting. 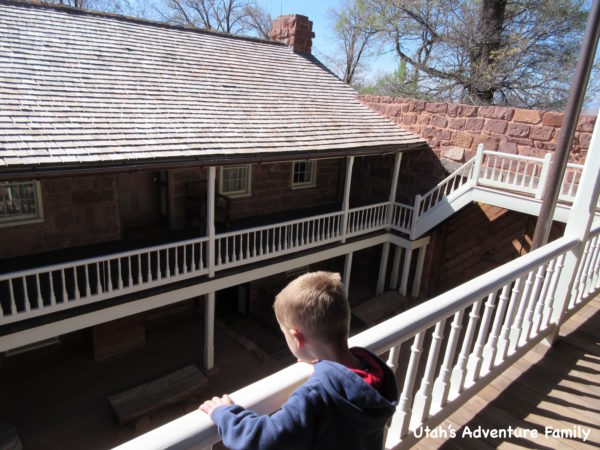 It’s a pretty fort and we had fun walking through. 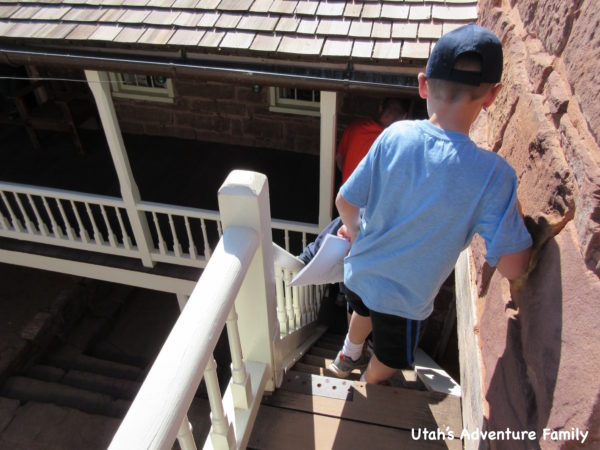 You do have to climb up some steep stairs.

This is a great tour, and our boys loved it. We learned a lot from our very knowledgeable guide. Of course, our boys completed the Junior Ranger program at this National Monument as well. Make sure to pick up a booklet at the desk when you arrive because some pages are specific to the tour of the fort. They have different booklets for different ages, so even our 3 year old was able to participate. 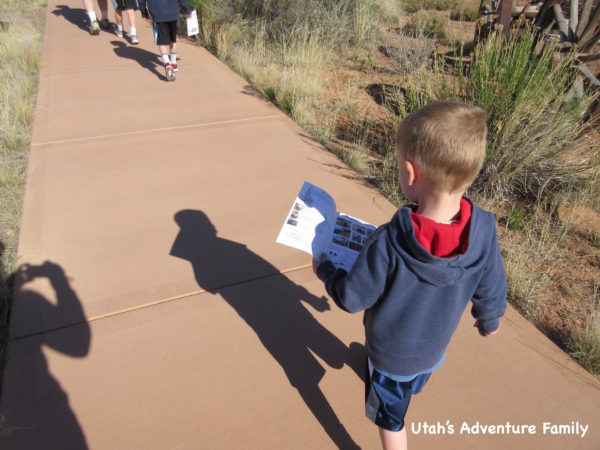 Our 3 year-old working on his junior ranger bingo page. 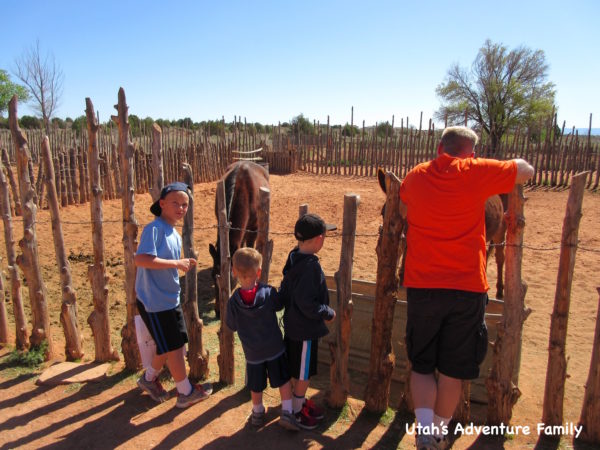 There are some huge cows as well as a few horses. 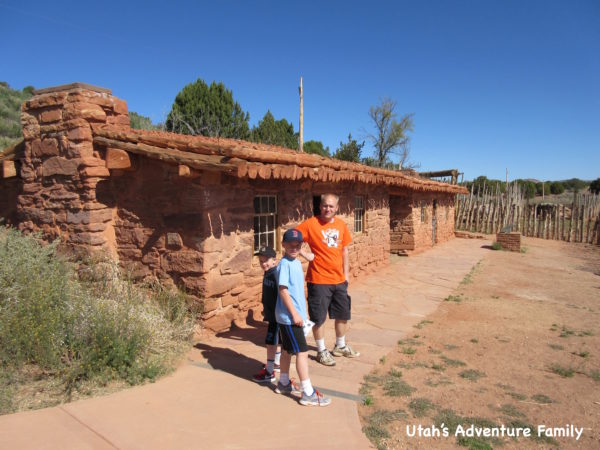 One of the bunkhouses to visit. 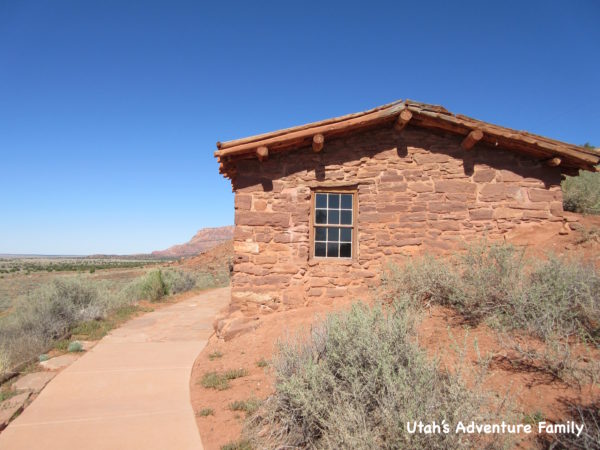 This bunkhouse is on the opposite side from the other house. 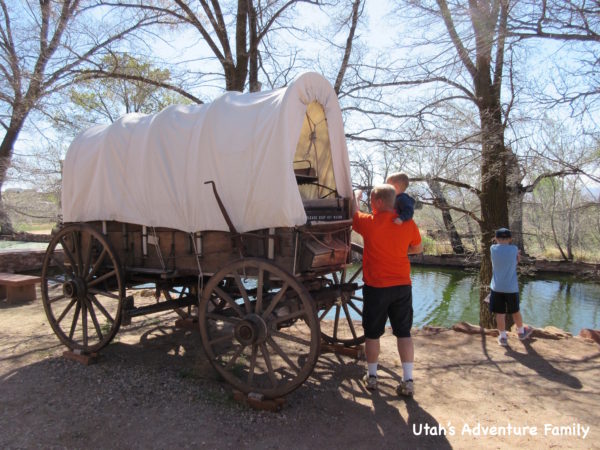 It is actually quite beautiful with the spring water and the old artifacts.

Plan on spending about 2 hours at Pipe Spring National Monument and if you have a National Parks Pass, you can enter for free. Otherwise it’s $7/adult, and 15 and younger are admitted for FREE.