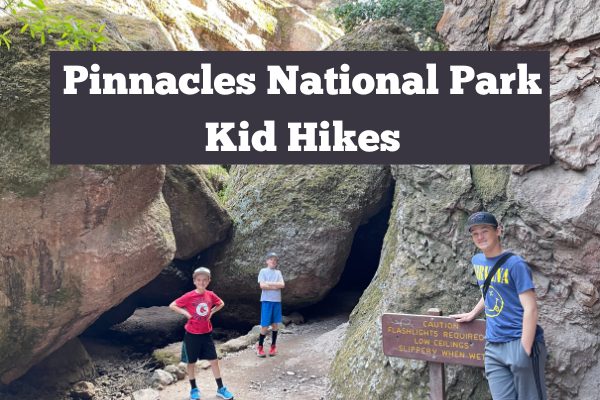 Pinnacles National Park is a relative small, new park, and there are not a lot of kid-friendly hikes. However, we did find a few hikes that we really liked. The hikes that we enjoyed most included sections that ventured through talus caves, which are caves formed by collapsed rock. In order to enjoy the first two hikes on our list, you’ll need a flashlight or headlamp. A phone won’t be enough to keep you from bumping your head against an overhanging rock. But the caves are fun for kids, and quite adventurous! Here are the Pinnacles Kid Hikes that we tried.

Balconies Cave is located near the west entrance to the park. This is the remote side, and since you can’t drive from one side of the park to the other, plan carefully. Most people don’t see the west side of the park, but Balconies Cave is worth it. This hike takes you 2.6 miles along the ridge and then drops down to the cave. It is a short climb up through the talus cave, which requires some scrambling, spelunking, and a lot of ducking. The cave itself isn’t that long, but the hike is pleasant.

This is the best known hike in the park, and for good reason. It has a rather long cave system. There are rails and steps in this cavern, making it much easier to pass through than Balcony Cave. There is also flowing water as the rocks have formed a cavern over an existing creek. This is the best hike we did in Pinnacles National Park.

Tunnel Trail is also in the remote western side of the park. This trail is not listed on park literature because it is a small section of the Juniper Canyon Loop trail. The hike is really steep and quite strenuous. It hikes up to a loop that many people enjoy, but we only went as far as the tunnel. The man-made tunnel goes through a short stretch of rock and is only about 100 feet long. We enjoyed this hike because we spotted condors soaring above us. (Don’t mistake the many turkey vultures in this area for condors, though.)

There are other trails in Pinnacles National Park that are worth trying. Many are short, but we couldn’t squeeze them in and get from the east side of the park to the west side in a single day. Let us know your favorite hike for kids in this area! Here are a few others we have on our list of next time. More details on these trails on the Pinnacles National Park site.