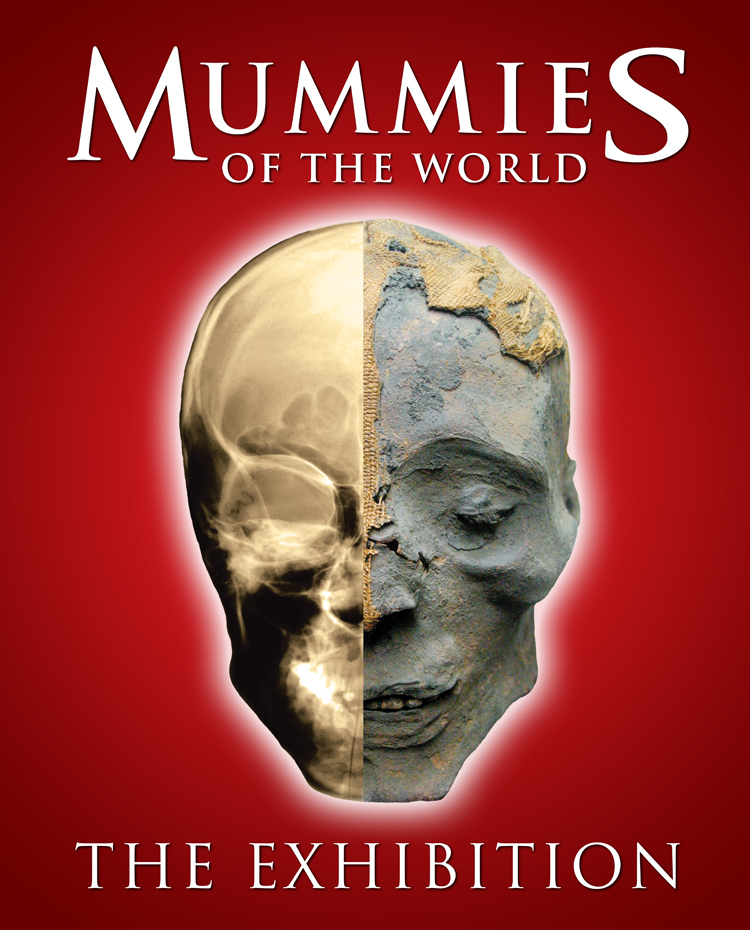 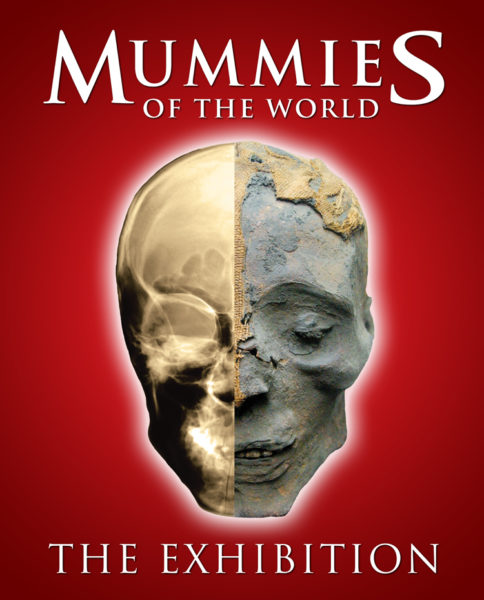 We love the Leonardo in Salt Lake and have enjoyed a lot of different exhibits there. So when we got the chance to go see the Mummies of the World exhibit last week we were really excited. The boys don’t know too much about mummies other than what they’ve heard on Halloween and from the Magic Tree House book we’ve read, so we knew that they’d learn plenty. We had no idea we’d learn as much as we did. 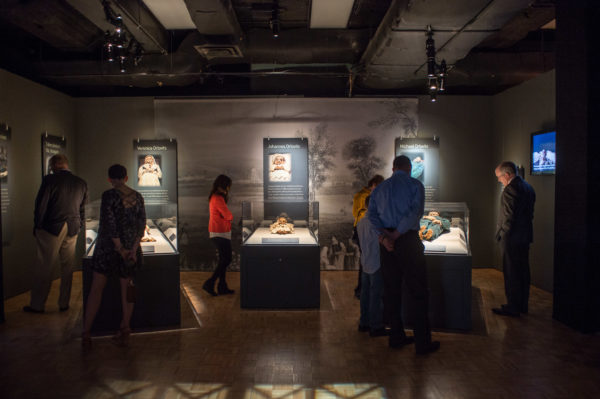 Please be quietly respectful of those who have passed as you walk through the exhibit.

First of all, we just assumed that this would just be an Egyptian thing, and that there would be three or four 3,000 year old mummies with their sarcophagi. That would have been cool enough, but this exhibit has much more. We learned that there are many naturally mummified bodies from all around the world. I won’t spoil it for you by telling you everything, but bodies can mummify in salt, bogs, ultra-dry conditions, and in other ways, too. 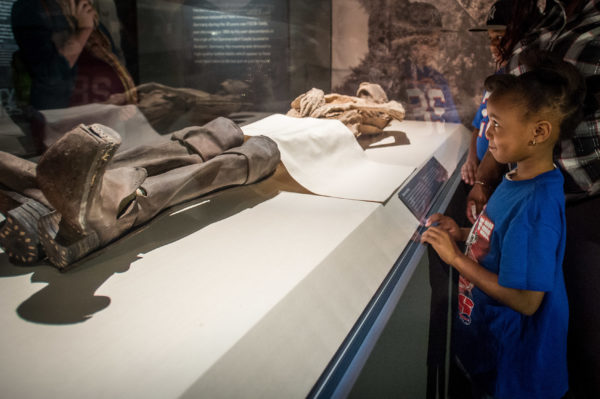 This mummy formed naturally and is still wearing his boots. He had hair clearly visible. 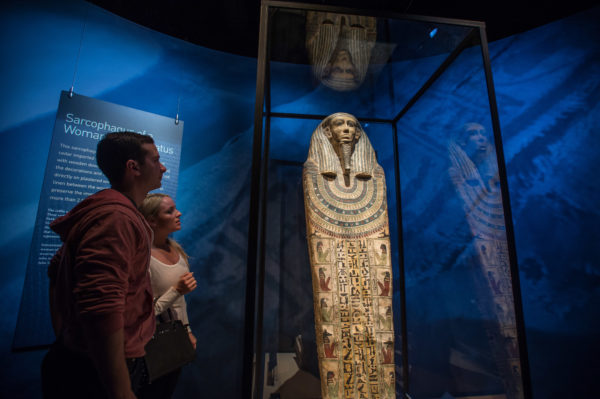 There are several Egyptian mummies. This is one of the sarcophagi in the exhibit.

In the first room, you’ll meet a mummy that formed natural in the cool of a vault in a catacomb in Europe about 500 years ago. We learned this from the description that gives you details like where, when, how formed, and other interesting bits of history on the side of the glass case. This was one of the coolest aspects of the exhibit that helped us learn all about different kinds of mummies including mummies from the 19th century that were used for anatomically study, Egyptian mummies like those seen below, and others. 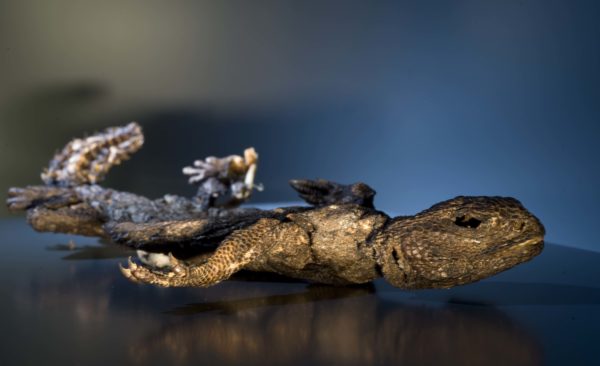 This spiny-tailed lizard from the Sahara Desert is an example of a modern-day mummy — probably less than 100 years old. It was mummified by the hot, dry air of the desert. This lizard is part of the Mummies of the World exhibition, the largest traveling exhibition of mummies and artifacts ever assembled, opening at the California Science Center in Los Angeles on July 1, 2010. Credit: American Exhibitions, Inc.

[caption courtesy of Mummies of the World: The Exhibition]

One thing that our boys loved was the animal portion of the exhibit. There is a mummified lizard (seen above), a mummified cat, a fish, and a few birds. These animals were mostly “young” mummies, having been formed in the last hundred years under natural conditions. The boys learned a lot about decomposition, and thought this part was so cool. 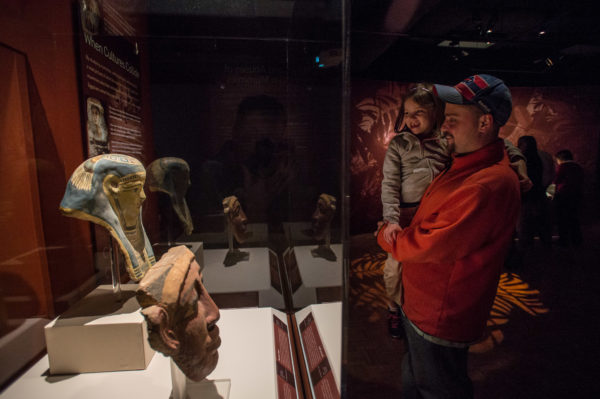 Along with the mummies are several death masks and other pieces that relate to the mummification process such as pottery for storing organs, knives and tools, and burial trinkets.

Right about now you may be wondering if the exhibit would be a bit morbid for you. Well, honestly, there were times when I felt a little queasy. There were unsettled moments when you realize you are looking at something that was once alive, and you can see hair, skin, and teeth, but that feeling actually adds to the reverence of the experience. You feel as if you are in a tomb and that you should be silent and unsmiling (and in fact, you’re asked before entering to remember to be respectful of the people you are viewing). At any rate, I don’t think that even the most mild among you would be upset by the exhibit. Even our three-year old was in awe of things he saw there.

The Mummies of the World Exhibit is at the Leonardo until March 6th. You need to have a scheduled time to attend the visit. You can buy tickets online or at the museum. We showed up at the museum and were able to get in on Friday night. You can find more details about times at the Leonardo website. The entrance fee for this exhibit also allows you entrance to the rest of the museum, so we spent some time enjoying all of the hands-on activities that they have throughout the museum. We enjoyed this unique exhibit and our kids are still talking about seeing the mummies!