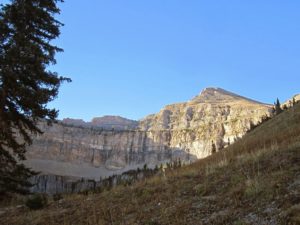 My wife and boys were out of town on Saturday, which gave me the opportunity to hike Mt. Timpanogos for the first time. Let me start by saying this is not a hike on which to take your young family. I saw only 1 child out of the nearly 200 people along the trail. I’ll start with a list of items that you should take on this hike. My list isn’t meant to be complete, but specific to this hike, so use common sense about hiking shoes, etc:

~1 gallon of water. I took a gallon and drank every drop. I left more in the car and kept drinking on the drive home.

~Plenty of food. You’ll be on the trail through at least one meal, so pack a lunch and snacks.

~A handkerchief. I randomly put one in my pocket on the way out the door and was glad I did. Your nose will drip in the cold wind and you can use it to wipe sweat as you hike.

~Chapstick. The wind is brutal on the summit, and you’ll be breathing hard through your mouth on the ascent.

~Jeans. I saw people wearing shorts, which is a huge mistake. It’s freezing over the last 2 miles, and branches will be scratching at your legs for the first 3 miles.

~A jacket. You are far more likely to be cold than hot on this trip. I know you THINK you’ll be okay, I think I’m pretty warm-blooded, too, but you’ll freeze. It was 80 degrees on the valley floor when I did this hike, but there is no way the windchill on top was above 30 degrees.

~A camera. There are plenty of places to take pictures along the way.

~A flashlight or headlamp. Smart hikers leave well before dawn. I got to the trailhead at about 5:20 am.

~$6. There is a fee to pay to use this area. You’ll want to leave early, before the ranger wakes up, so bring exact cash or a check.

The trailhead that I used was called the Aspen Grove Trailhead. I’ve read this side is shorter and steeper than the Timpanoeke Trail, but I wanted to see Emerald Lake and the mountain goats. Access to the Aspen Grove Trailhead is up Provo Canyon. Turn left up into the Sundance area and proceed until you hit the ranger station. It’s six bucks to pass the ranger station. No one was there when I drove by at 5:15 am, but you can get an envelope at the trailhead. Fill it out, put in your $6, put the envelope in the slot, and leave the stub on your dashboard.

Be careful as you leave the parking lot. Right in front of you (from the “pay post”) is the Stewart Falls trail. You need to go to your right. After about 100 yards, you’ll come to a shed with a sign-in roster. I signed-in, which seemed especially important since I was hiking alone.

The trail is around 7.5 miles each way. The first 3 miles are through scrubby brush and small trees. The trail is narrow, but much of it is surprisingly paved (though long ago, so it’s pretty crumbly). You’ll come to two waterfalls which are quite beautiful later on in the daylight. I also saw a skunk on the trail, so keep your eyes and ears open.

On the way up the trail, you’ll pass half of BYU’s student body coming back. (Apparently the thing to do is begin the hike at 10pm and get back around 6am. They all had the same story, though: It was too cold and windy to possibly make it to the top). I’m not sure why anyone would want to take this hike in the dark. It would be a bit like going to a concert with earmuffs. I go hiking to see things. Also, many of them told me they lost the trail. That’d be easy to do at 3:30 in the morning! Oh, and they were all wearing shorts, of course.

The sun came up about the time the trail began to straighten out and turn south. There’s a long mostly flat stretch here, well more than a mile, that leads to the bottom of the ascent. Then, the trail goes through a series of short switchbacks. Too many people have “cut” the trail, making it a bit confusing, but the trail zigzags back and forth up into the bottom of the bowl above you. This is the first and longest of the steep climbs.

As you approach the top of the switchbacks, look for the mountain goats (mountain sheep?) on the hill to the south. I saw a few along the cliff. When you enter the bowl, the trail flattens out. There are a lot of campers on the flat, so traffic picks up here. If you haven’t seen any goats yet, look up on the hills surrounding the bowl. I probably saw 25 or more. A short steady climb, maybe a half mile will lead you to Emerald Lake. This is nearly 6 miles into the hike. There is a small lake that flows from the “glacier” (thus the green water). Some people were using water purifiers here. There is also a stone shelter with a fireplace. A scout troop had used it the night before, but they said they didn’t get much peace from the frequent string of coeds popping in to warm up. It will start to get a little cold and windy here, but you haven’t seen anything yet.

The next stretch of the trail is pretty flat, but not always easy. You start into a boulder field and the trail splits. The obvious route is down and right, but the correct route is up and left. The right fork takes you down into a wide valley and hooks on to the Timpanoeke Trail. You’ll have to climb back out again on the other side. The left fork goes through a boulder field, which is a bit tricky, but eliminates most of the climbing. You’ll want to stop somewhere in the boulder field for lunch. Eat, rest up, and get your jacket out. The wind is mostly calm, and the sun will feel nice.
The last climb to The Saddle out of the boulder field is the most difficult stretch of the entire hike. It’s almost straight up, but only for about 100 yards. After the toughest stretch, you’ll meet the fork for the Timpanoeke Trail. It’s only a few more steps to The Saddle.

It’s VERY cold all along the west face of Timpanogos. You go south and then turn and climb up through a crack in the rock. It’s almost like climbing a ladder. From here is a steady, frigid climb across granite crags to the summit. (They say it is almost a mile from The Saddle to the summit.) 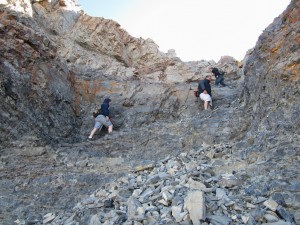 On the top of the mountain is a tin shelter with a register to sign. The wind is cold enough to take your skin off, but you can see from Jordanelle Reservoir in the northeast all the way around to the copper mine in the northwest (the view of Salt Lake Valley is obscured by Lone Peak). It was so cold at the top I couldn’t imagine staying for more than 2 minutes, but I was met by a welcome surprise.

Take two steps off the east side of the summit and the wind will stop. You will feel the sun on your face, and the juxtaposition with the wind will make you feel like you are at the beach. There will be 50-100 people here, but you can find a spot to sit and relax. I ended up spending almost an hour looking over the Heber Valley. (The hike to the summit was almost exactly 5 hours. I spent an hour at the summit. It was about 3 hours to descend– 9 hours total).

Some say you can slide down the “glacier.” In September, the glacier was a patch of rocky snow. There was no chance of sliding down it. I heard that you could walk down it, though, and end up back at Emerald Lake, so I decided to try. It was a big mistake.

I walked south along a path that leads to a second saddle about a half mile away. Again, it was cold and windy, but the hike was easy. From the second saddle, it looked like a steep descent down to the lake. It proved to be far worse. The descent was dangerous at best. You start out in shale that sloughs off far too easily. Then you hit a huge boulder field. What makes it treacherous is that not every boulder is loose, just every third or fourth. Worse, there is no turning back. It took me a long time to pick my way down to the lake, and I was lucky the only price I paid was a gash in my wrist and a knock on my ankle. Only a fool would try this. I did make it down, though. I wondered how much time I’d saved, but when I got to the lake, many of the people I’d seen on the summit had arrived at the about the same time I did. It was the worst “shortcut” ever.

On the way down, don’t forget to enjoy the hike. The goats and the waterfalls are waiting to be seen. It is far too easy to “zombie-walk” back to the car. Downhill is easy, and though you’ll be a little sore tomorrow, you’ll be glad you did this hike. Everyone should.
Tags: Lakes, Summits, Utah, Waterfalls

Hike the Y in Provo

Hike the J for Juab