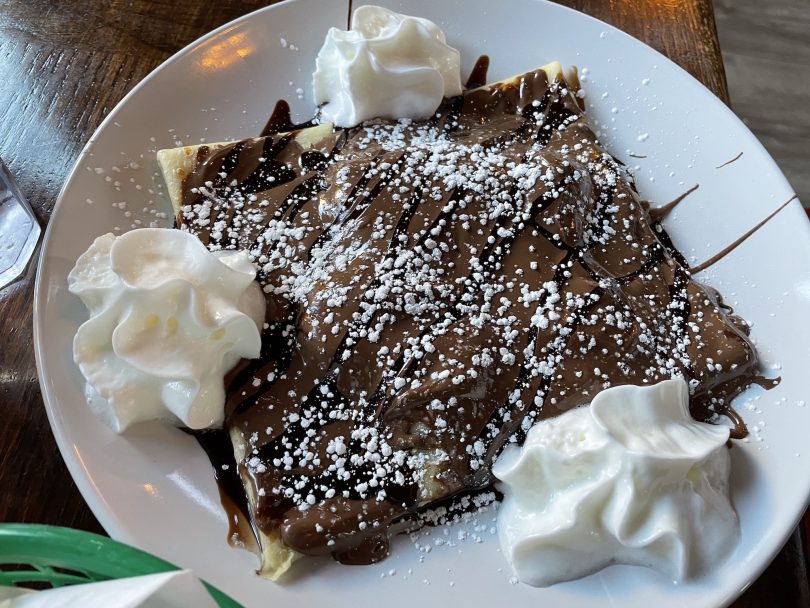 Just outside of Zion National Park, in the small town of Springdale is a nice little restaurant called MeMe’s Cafe. Of course, the restaurant is not full of photos with funny captions, and it is not pronounced ‘memes,’ but rather, it was named after its owner Mechelle, who is affectionately known as MeMe.

This restaurant really hit the spot because the prices were reasonable, the atmosphere was perfect, the service was friendly, and the food was fabulous. Most importantly, though, our kids cleaned the entire table, which is a rare feat for our picky eaters.

MeMe’s has a variety of burgers and traditional food, but we were most intrigued by the crepes. We tried a savory crepe that had peppers, chicken, and mushrooms, and it was really delicious. Our boys opted for cinnamon and sugar and banana with nutella, and they devoured them in just minutes. Luckily, we had ordered them french fries to go along with their lunch crepes! Dad ordered a bacon and egg burger, and it was so fresh and delicious! The egg was cooked perfectly, and the hollandaise sauce gave it just the right amount of tanginess.

There probably isn’t a restaurant in all of Springdale that our family of five can eat at for under $50. With tax and tip at MeMe’s Cafe, we were just under $75, which was a great deal. Our waitress was attentive and helped us with our menu choices. There was also indoor and outdoor seating, so we could enjoy the cool evening air or the air conditioning depeding on the time of day. Meme’s is open all day, so you can visit for breakfast, lunch, and dinner.