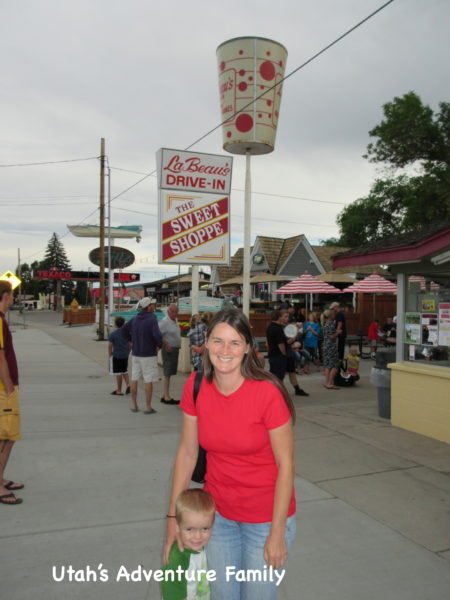 LeBeau’s is a great restaurant to stop for food at Bear Lake. The place has grown in the past few years, and has even expanded across the street to a place called LaBeau’s, Too. What draws people to LaBeau’s is primarily the shakes. Fresh raspberry shakes are the signature item, but there are a lot of different flavors to be had.

LaBeau’s is your basic hamburger, french fry shake joint from the past with a few exceptions. First, there is always a line, so be prepared for that. You order outside at the window and pick up your food when they call your name. Second, you will be sitting outside to eat. There are only 3 tables inside, and with the volume of customers at LaBeau’s on a summer day, they don’t open up much. But behind the restaurant there are several picnic tables that are fairly well shaded.

The food is a little pricey at LaBeau’s (shakes run nearly $5 a piece), but there is lots of food. The jumbo fries were huge, and the shakes were almost too large to eat a whole one. The burgers are good and filling, too. Any trip to Bear Lake without a stop at LeBeau’s isn’t really a trip at all!

LaBeau’s is located in Garden City just a block or two north of the 3 way stop. You can park behind the restaurant or on the street. You can’t miss it– just look for the line of people. (No compensation was received for this honest review.)