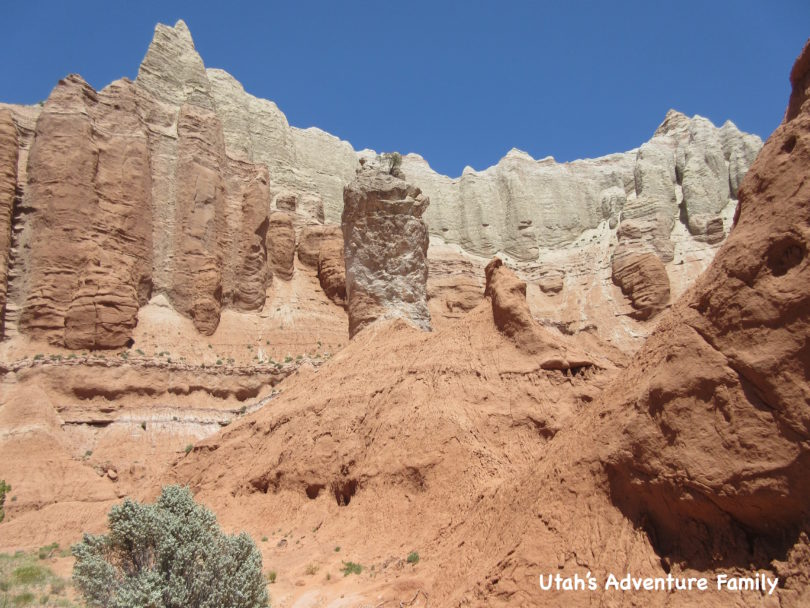 Kodachrome Basin State Park was named for the different hues in the soil and colorful peaks. There are some nice short hikes at this park if you are in the Cannonville area.

Our favorite area of this park was the eastern road, which is a rough dirt road. There are two things to see on this drive, an arch, and a tall finger of stone. You can drive directly to the stone, which is called Chimney Rock. Shakespeare Arch requires a short hike.

Update: Shakespeare Arch collapsed in April 2020. The trail is still open, but the arch is a pile of rubble. We started with the hike to Shakespeare Arch, which we did right before sundown. From the Visitor’s Center/Entrance Station, take the first right and head past the campground. Then follow the rocky road to the junction and take a right. After about a quarter mile, there is a small parking lot at the trailhead. We saw a few rabbits and a lot of lizards as the trail wound around the side of the mountain and up to a small arch called Shakespeare Arch. It is very flat, and the distance is only about a half mile round trip. The arch is pretty and you can climb right up under it and take pictures. The pretty red sandstone reminded us a lot of southeastern Utah.

From the arch trailhead, we backtracked in our van to the junction and went the other direction. This equally rough road leads to Chimney Rock. This formation isn’t very far, and it is huge. It stands 6 or 7 stories high and would take 20 people to hold hands around. There isn’t much to do but take pictures, but it is still worth seeing.

There are several other hikes to do in the main part of the park, and our group tried a few of them. The first is the Kodachrome nature trail. It is flat, easy, and stroller friendly. This short half mile loop has interpretive signs and you’ve got a chance of seeing wildlife.

The second hike we tried was quite a bit longer and left from the picnic area. It was called Grand Parade and went in a loop to two separate box canyons, which were small and not super-impressive, but the walk was nice. There isn’t much shade, so make sure to take lots of water and wear sunscreen. The loop is about 1.5 miles, but that does not include the off shoots to the box canyons. Those add about a mile to the total hike. So with the box canyon side trails, the Grand Parade Trail ends up being 2.5 miles.

Our three year-old easily did this trail without help as there is little elevation gain and it is fairly smooth, though not stroller friendly.

The final trail we did was Angel’s Palace. This was our favorite trail in the park, but we do have a small warning. There are some steep drop offs, so be careful with young children. You can stay back from the edges, but please read our post specifically about this hike and look at pictures to decide if it’s right for your family. Angel’s Palace Trail link. This trail is about 1.5 miles and there are a few steep sections, but our boys made it just fine.

There are also a bunch of other hikes in the park that we were unable to hike due to length and the amount of time we had. Kodachrome Basin State Park would be a great place to camp and spend a few days, but not in the heat of summer. There is a lot to do near Kodachrome Basin, as well, including Bryce Canyon National Park and Grand Staircase: Escalante National Monument.