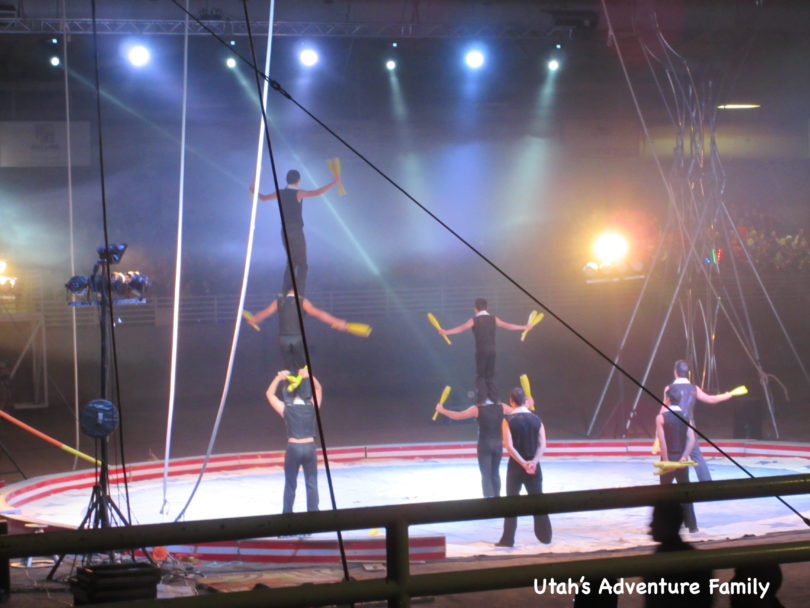 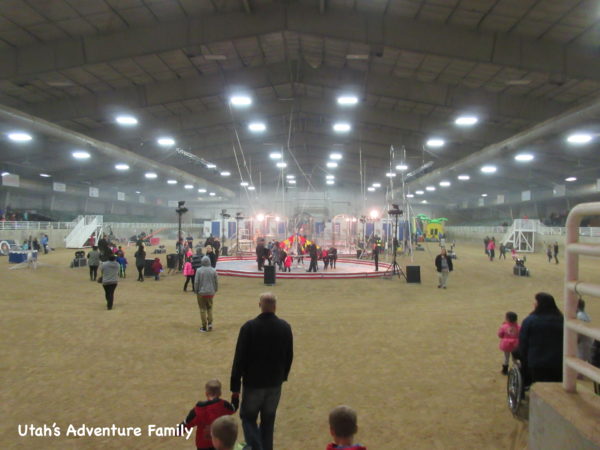 This circus isn’t as large as the Ringling Brothers, but there are some fun acts.

Last night we went to the Jordan World Circus at the South Jordan Fairgrounds, and we had a lot of fun. This is a small three-ring circus, but there are some really cool acts.

The show is split into two halves with a half hour intermission. The first hour of the show before the intermission had some of our favorite acts. There were some really talented jugglers that worked as a group. There were 8 of them, and they juggled both individually, in duos and trios, and even all 8 of them together. It was amazing how fast and complicated their routines were. 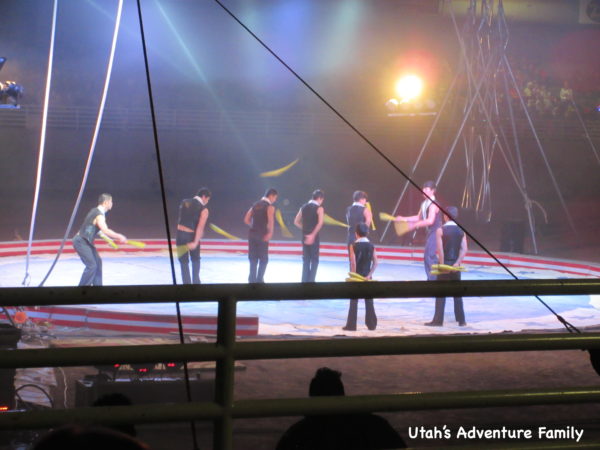 The jugglers were very impressive. 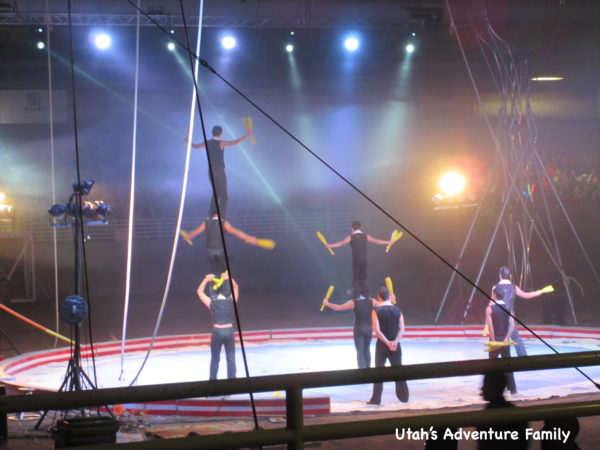 Yes, they even juggled all stacked up like this!

We also really liked the aerialists. They performed in both halves of the show including once as Arabian princesses with Aladdin. During their routines, they are hoisted up on ropes and they dance in the air 50 feet above the ground using just the rope for support. It is really fun to watch. Here’s a break down of the acts:

-Tiger Tamer: This section of the show honestly seemed a little outdated to us. It was much more fun to watch the human acts. 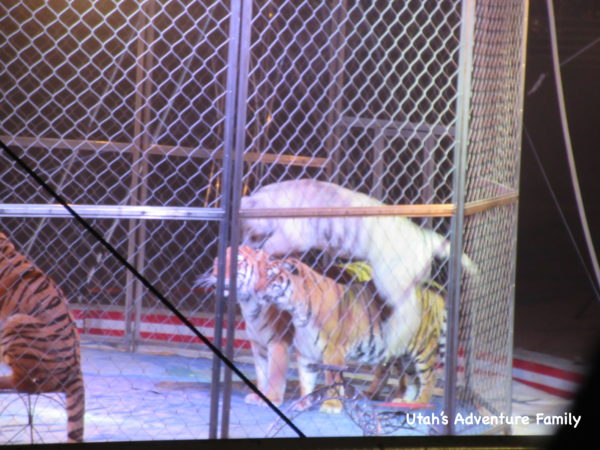 This was the only part of the tiger act that the boys thought was impressive—jumping over each other.

-Hamster Wheel: I’m not sure what to call this act, but it was a guy in a big hamster wheel that rotated on a larger fulcrum. He came closer to death than any of the other performers, it seemed! 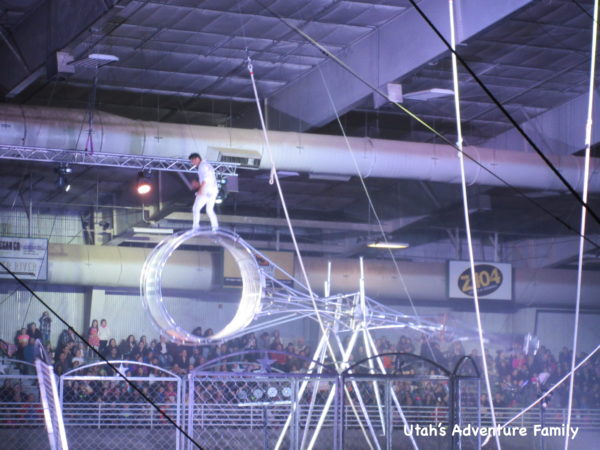 He even jumproped while that cage was spinning around. I thought he was going to fall at least 5 times.

-Aerialists: Aladdin and eight princesses swinging around on ropes as described above was mesmerizing. 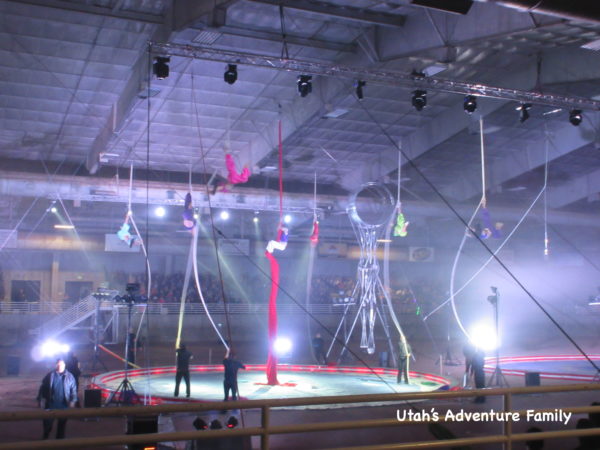 The Aladdin performers were fun. I wish I had the core strength that they have.

-Spider Man: Spiderman did a routine very similar to the aerialists. He flew high above the arena and used bungee cords rather than ropes. 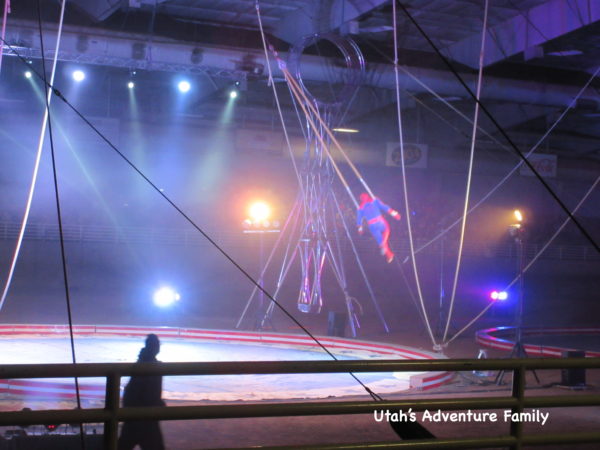 Our youngest said this was his favorite part, and is still walking around singing the Spiderman theme.

-Three ring performers: They had acts in all three rings on two occasions. Once there was a Hula Hoopist, a guy balancing on round things, and a contortionist. The second time there were three contortionists including one who fired an arrow at a balloon with her feet while doing a handstand. 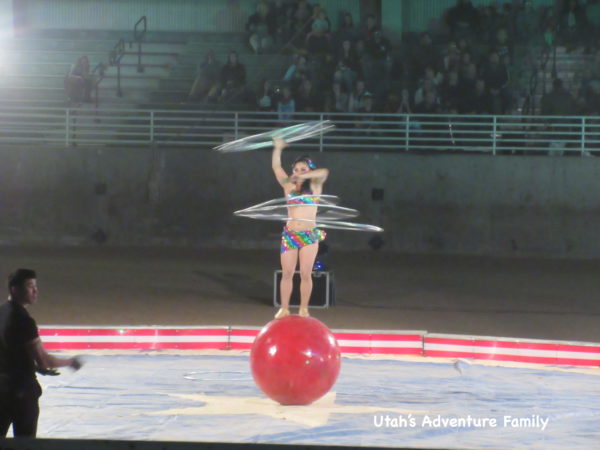 You can’t tell, but she has about 8 hula hoops going around her. 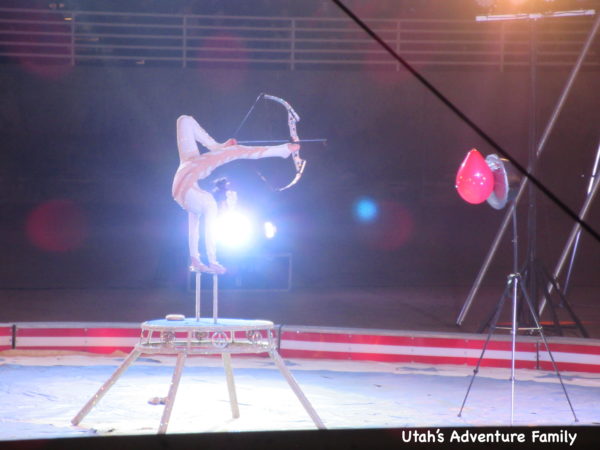 I couldn’t believe someone could actually bend their body that way. 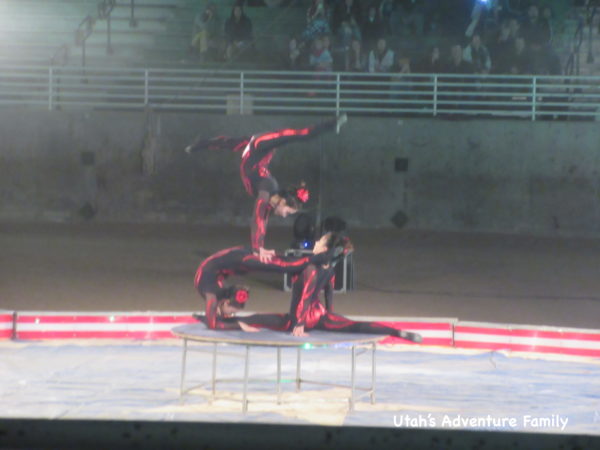 I mostly watched this with a painful grimace.

-Dog Tricks: Some very hyperactive dogs did a few different kinds of tricks.

-Clown Wedding: There was a silly clown scene with two hobo clowns and their troublesome car.

-Pot Balancer: I know a pot balancer doesn’t sound cool, and the kids didn’t love it, but he was a unique talent. He balanced and spun a 35 pound pot on his head. You sort of have to see it…. 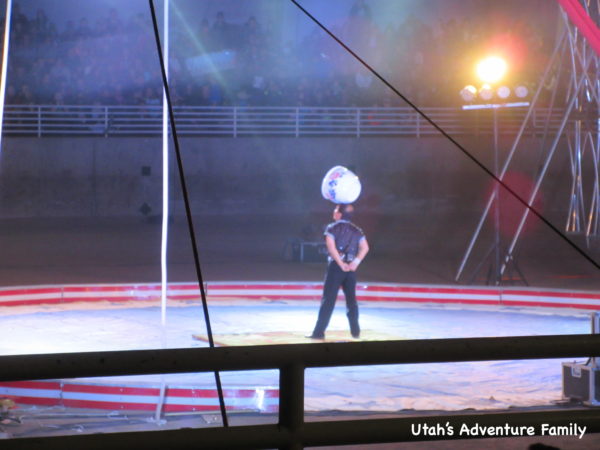 This act was pretty amazing, but since we weren’t allowed to video, we can’t show you how awesome it was.

-Jordan Globe of Death: This is a world famous act where two motorcyclists ride inside a metal ball and through some miracle don’t crash into each other. This is one of the highlights of the night!

The second half of the show lasts around 45 minutes and includes:

-Three Rings: They have another 3-ring bit with two unicyclists and a pole routine where two guys do tricks on a 50 foot pole. 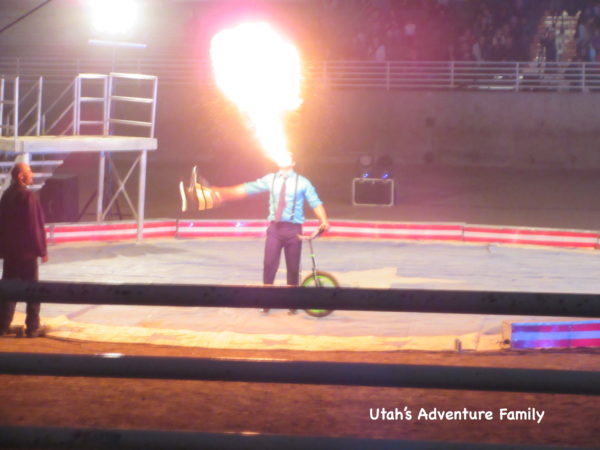 The unicyclist ended with a huge flame!

-Clown Music: The clown musical routine is a little funny, but it ran on a little too long for our taste. 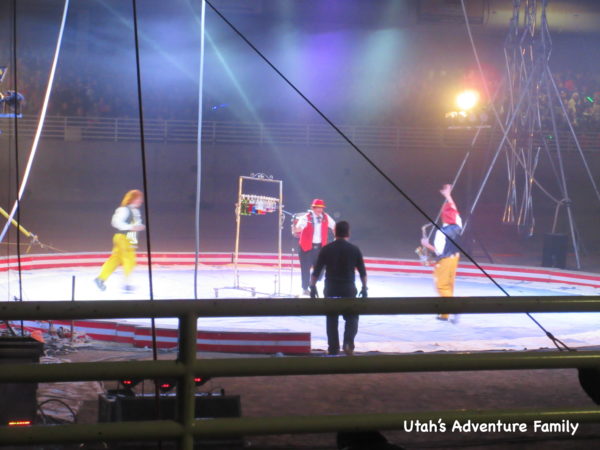 The clowns weren’t as funny as I had hoped for, but they were only in the show a few times.

-Animal Act: A camel, a few horses, and ponies, and a trainer do a few tricks. Camels look really funny when they run.

-Acrobats: This time, the jugglers do acrobatics. These eight guys toss each other around, do flips off each others bodies, and many other tricks that you have to see to believe. 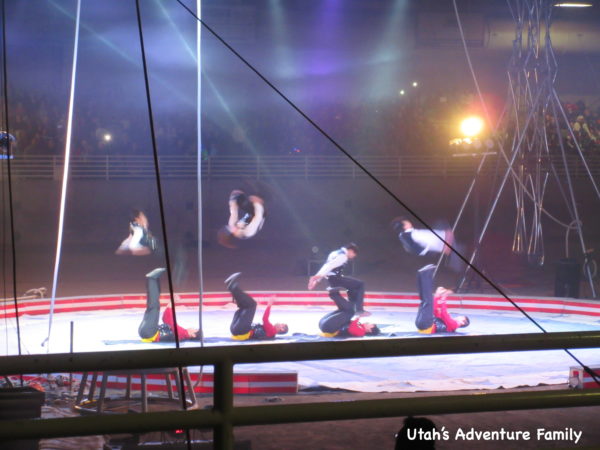 Ther acrobats were so amazing.

-Dancers and elephants: The final act features two elephants and a few dancers. (We know that some people find animals at the circus controversial, and certainly the protestors outside don’t appreciate this part of the circus, but please don’t take out your frustration on our website!) 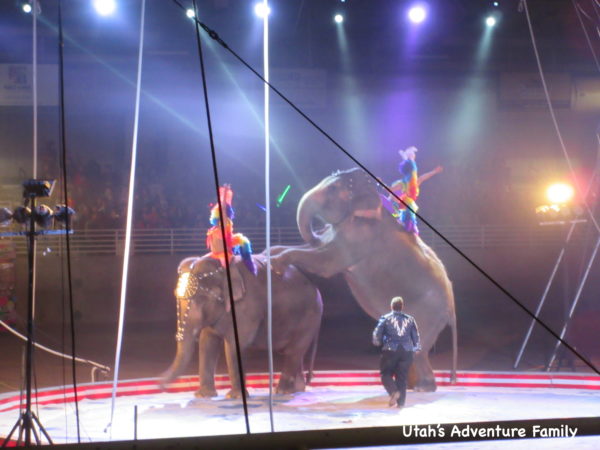 The elephants did some impressive tricks! And our boys really liked seeing them.

We had fun at Jordan World Circus. The acrobats were definitely the family favorite. During the intermission, you can ride ponies, a camel, or an elephant for a rather steep price. We had fun just walking around and watching. We also took our own snacks and drinks, but you can purchase food at the circus, as well as souvenirs. We tried to keep our night as cheap as possible. We do have a discount code for you.

Please Visit https://www.eventbrite.com/d/ut/jordan-world-circus/?mode=search
To Select your location For Ticket Purchase. Discount Is Good for Utah Locations Only On Family Pack. Please Use Code “FamilyFun” 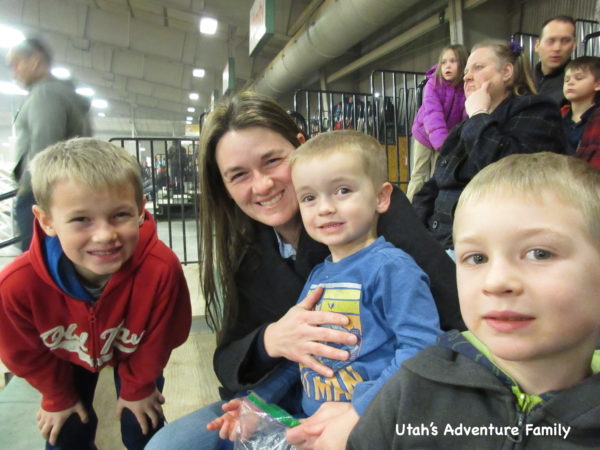 We mostly just enjoy spending time as a family. 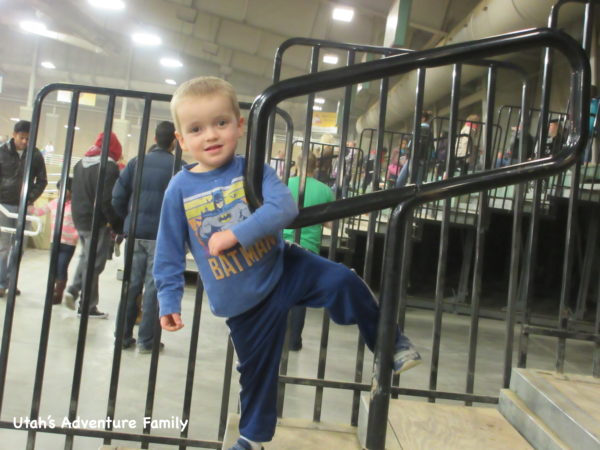