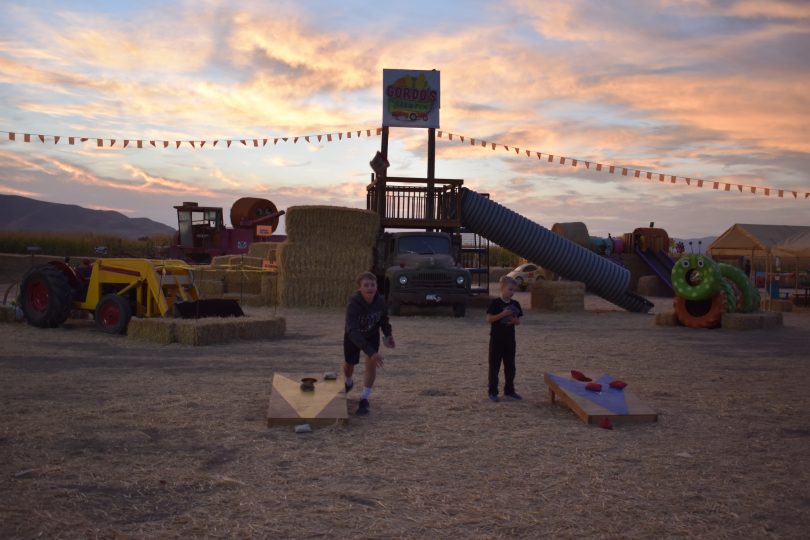 We tried a new pumpkin patch in Spanish Fork. Gordo’s Fun Farm has slides, games, animals, a small corn maze, and plenty of pumpkins. It was definitely worth the $5 admission fee (in 2020)!

We hadn’t heard of Gordo’s before, so we think it is new this year. We showed up just before dark and took in the beautiful sunset. There were plenty of great photo opportunities with decorations they have on display. There was even a nice boy named Bronco who was making balloon animals for the kids.

We liked the variety of games that we played at Gordo’s Fun Farm. Our boys played cornhole for a while, shot rubber band guns at aluminum cans, and played four-square in the air, which is a little like volleyball. We spent most of our time at these games, but there were other things to do, too.

In the middle of the property, there is a truck with a climbing structure and several slides. There was also a cool music area. We had fun banging on the pipes, pots, and pans. Our kids loved climbing through the tunnels and the straw bales. There were two different climbing areas, so it gave us plenty of room to explore and spread out. There was a small corn pit inside of a silo, but we didn’t go in there. It was more for little kiddos.

They had a huge variety of animals. We had a few quarters, so we bought some animal feed and fed the animals. They had goats, ponies, pigs, and puppies. The mama dog had 10 puppies. What a champion! The goats were hilarious since they were eating the cornstalks set up for decoration next to their pen.

After that, we did the corn maze. Since it was getting dark, we didn’t make it through the entire maze, but it wasn’t too huge to be overwhelming, which we appreciate. There was also a tractor barrel ride that goes around the corn maze for kids under 12.

Gordo’s has pumpkins for purchase. They are reasonably priced, so make sure to check them out. We grabbed a few of the small gourds for decorations.

Gordo’s Fun Farm was a blast! We spent a few hours playing and having fun. We are excited to add this to our Fall Activities in Utah list.

Gordo’s Fun Farm is located at 3259 W 5600 S in Spanish Fork. Make sure to follow the signs for parking. You will drive past the farm, and around the corner, then come in through the back to park. It’s a little bit of an off roading experience, so go slow!