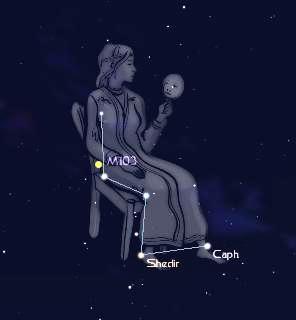 (Last Updated On: March 22, 2016)
Stargazing is a cheap, easy, fun adventure. We live in the northern hemisphere, and on most nights, we can find constellations including: The Big Dipper, Little Dipper, Cygnus, Andromeda, Draco, Orion, Pleiades, Pegasus, the Winter Triangle, Gemini, and Taurus. We also find stars like Betelgeuse, Rigel, Polaris, Bellatrix, Vega, Albireo, Deneb, Castor, Pollux, and Sirius. 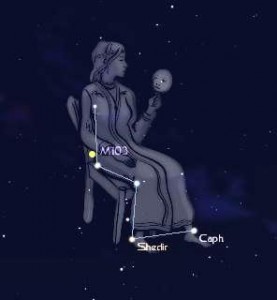 So here’s the constellation Cassiopeia. She was the queen of Ethiopia in Greek myth. Good luck finding her because in the night sky she doesn’t look at all like this! (Picture Credit)

Here’s what you’re really seeing. To me, it looks like a letter “W” that’s a little warped. If I squint really hard I can get a crown out of it– she is a queen, after all, but mostly I wonder what those Greeks were thinking. (Ptolemy described this constellation almost 2000 years ago.) Some people describe this constellation as Cassiopeia’s chair. I guess I can see that.