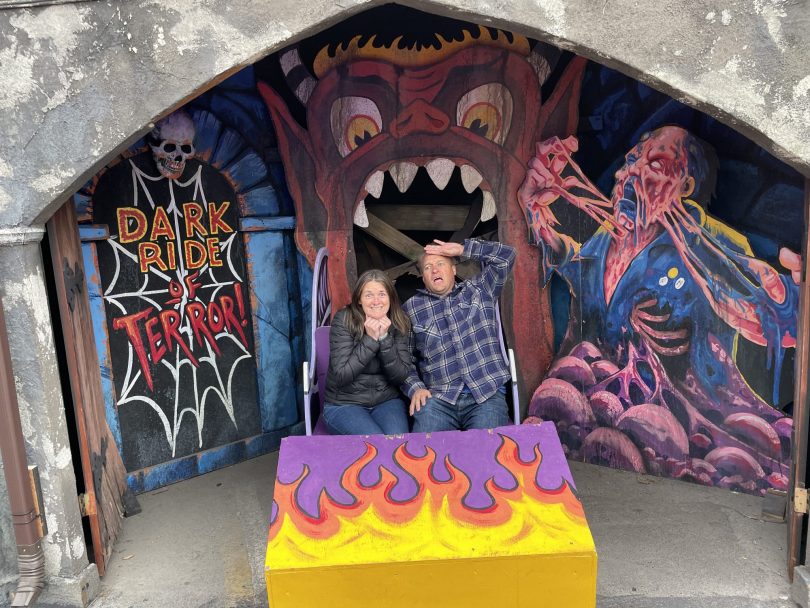 We have a lot of wimps living at our house. We don’t really love scary things, and our kids couldn’t handle an episode of Scooby-Doo until they were about ten years old. So when it comes to ultra-scary Halloween events, we usually take a pass. But we were excited when we found out that Nightmare on 13th Street has a new, kid-friendly event called Day Haunt. Day Haunt allows you to walk through this amazing haunted house without any fear of being trapped, accosted, or otherwise frightened out of your wits. There are no people or scarers inside during Day Haunt.

Nightmare on 13th Street has been in operation for thirty years! It is a permanent structure that you’ve probably passed on the west side of Salt Lake City. Just the exterior of the building is impressive, and we’ve wondered what it was like inside many times. Day Haunt at Nightmare on 13th Street gave us the opportunity to find out.

We won’t spoil the main features of Nightmare of 13th Street, but we will share enough about it to let you know what to expect. First of all, you’ll be walking, sometimes on uneven floor, for quite a long way. We moved through the house haunted castle fairly quickly, and we spent 45 minutes wandering around. It was dark, and there were a few areas of almost complete darkness. Best of all, there were no loud noises, terrifying actors, or moving parts during the day. There wasn’t very much gore either. We saw tons of families with children as young as three bravely walking through the haunting scenes (and none of them were crying!)

The elaborate scenes in Nightmare on 13th Street were impressive. There was a large swamp with a running waterfall that made up a large part of the area. Several huge crypt scenes that included coffins, skeletons, and the like dominated the central part of the castle. There were plenty of creepy mansion scenes that play on traditional fears, too. There were a lot of other themes and things to see as well.

Our favorite part, though, was the rotating tunnel. This was where we walked across a bridge as the room rotated around us. Though the bridge was not moving we staggered and clung to the rail as we crossed. Then, as we left, the room stopped spinning, but the spin stayed with us, and we had difficulty traversing the next area. It was a really unique and fun experience.

If you are not into big haunted houses, but are open to seeing an amazing Utah Halloween tradition, try the Day Haunt at Nightmare on 13th Street. We really enjoyed it, and we got just the right amount of scared! This was a neat and very unique Halloween adventure. For other family-friendly (non spooky) Halloween activities, check out our full list!