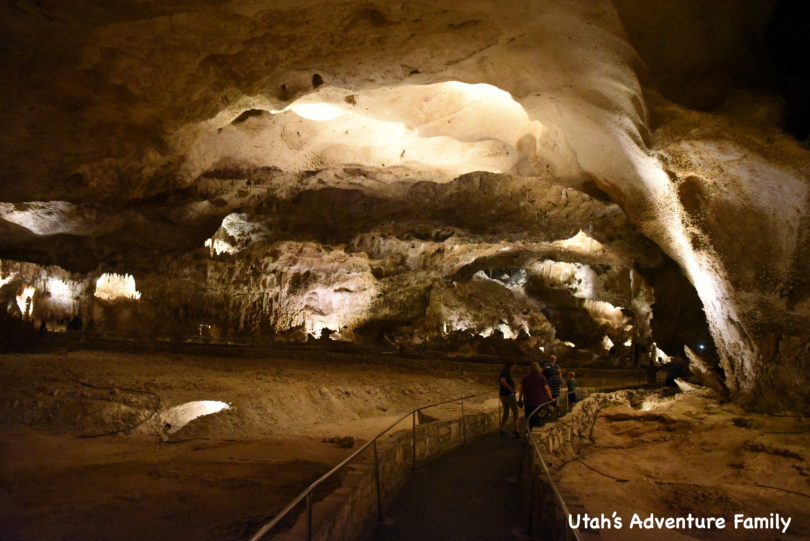 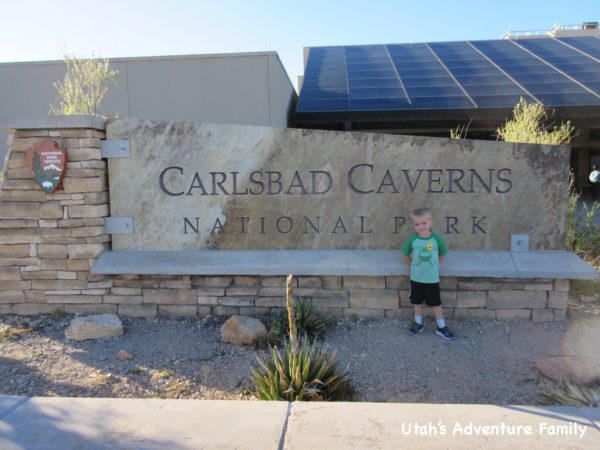 We are road tripping here at Utah’s Adventure Family. The reason we are on the road is that we love caves. From self-guided lava tubes like Mammoth to ranger-led tours like Minnetonka, we’ve done a lot of caving! So this week, we are fulfilling a lifelong dream of visiting Carlsbad Caverns in New Mexico. This mother-of-all-caves is located in the extreme southeast corner of the state, but after visiting today, we all agreed it was worth the fourteen hour drive from the Wasatch Front.

If you decide to take this adventurous trip, we created a Bingo Sheet that we used while exploring New Mexico on our way to Carlsbad Caverns National Park.

The first thing to know about the cave is that it is massive. When you stand on one side and look across, it is like looking from one bleacher of a football stadium to the seats on the opposite side. The ceiling towers up to 200 feet in some places! There are not really words to describe the feeling of a subterranean cavern that would fit two US Capitol buildings inside. Further, it is impossible to take a picture that shows the vastness of this cave. But we can give you a description of what to expect when you arrive.

There is a small Visitor’s Center at the top of the cavern. The gift shop includes a cafeteria, but there isn’t much to the museum. You can easily walk through it in 15 minutes. There are several possible family-friendly tours to take, which we’ll describe in this post. All cave tours, self-guided or ranger-led require fees and tickets to enter at Carlsbad Caverns. 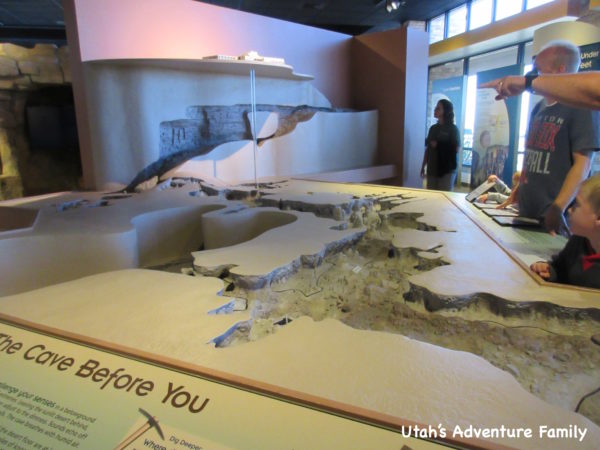 We loved these exhibits that showed how big the different caverns are, and where they are located in relationship to each other. 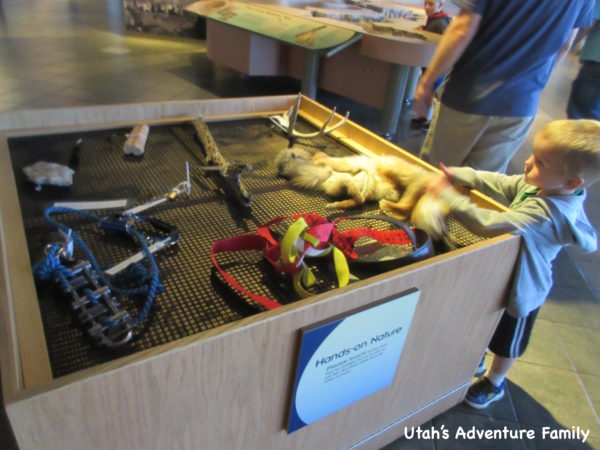 There are a few hands-on exhibits, including this touch table. 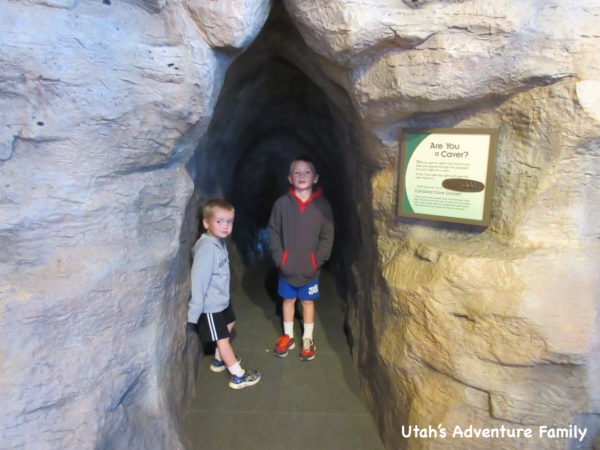 This was the boys’ favorite thing. You crawl through on your belly at the other end of that small “cave.” 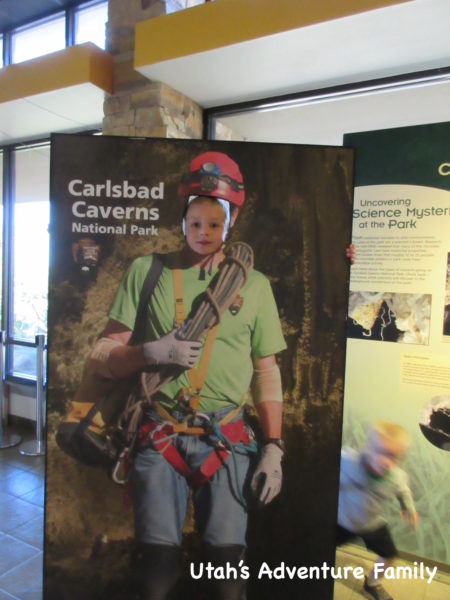 You can take some great photos in the museum.

The first hike to consider is the Natural Entrance Trail. You can walk down the actual entrance to the cave that was discovered by Jim White back in the 1880s. The trail is paved all the way and winds steeply down in to the cave. The distance for this trail is 1.25 miles down, and you can ride the elevators back up. There are several natural features to see along the trail, too, including the Devil’s Spring and the Whale’s Mouth. We did not hike this trail down in with our young boys, but would have if we had been there an extra day. 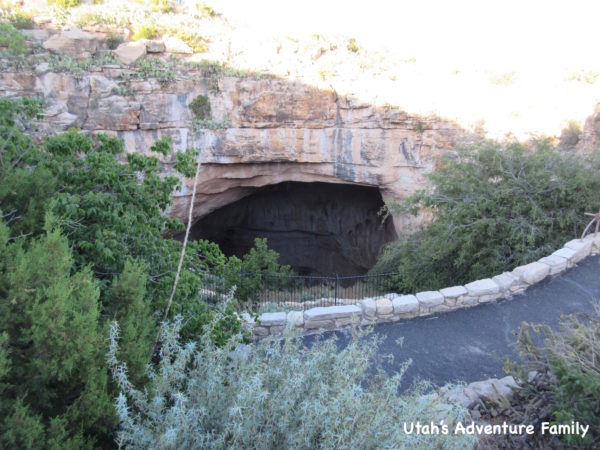 This is the natural entrance to the Carlsbad Caverns National Park

You don’t have to hike the Natural Entrance to see the beauty of the cave, you can just take the elevator to the main passage called The Big Room. The elevator is like any other: it holds about 8 people and is fairly small, but it travels 9 mph down 800 feet. The trip is not any scarier than your average elevator ride. If you take the elevator down, you arrive at a small cafeteria built right in the cave. There are sandwiches and other cold items along with a t-shirt shop, tables, and restrooms. The trail leads from here into the Big Room. 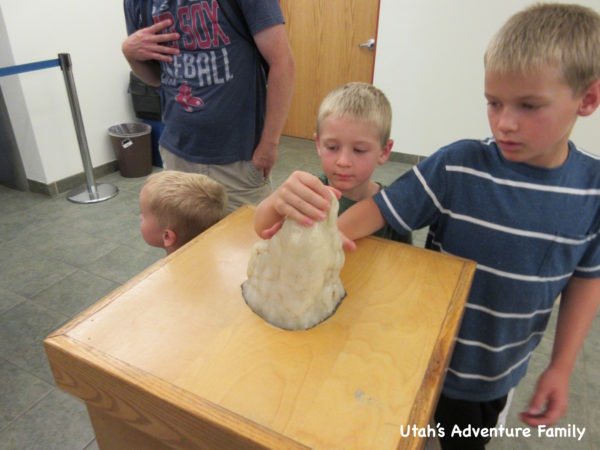 Before you ride the elevator down to the Big Room, the ranger has you touch this one stalagmite and reminds you not to touch anything in the cave. 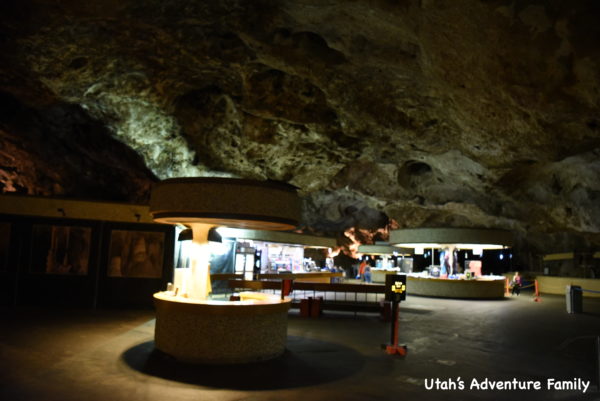 When you walk out of the elevator, you will see a large gift shop and small restaurant right inside the cave! We were very surprised!

The Big Room is the main tour of the cave and it is self-guided. The trail loops around this room in one massive arc. The reason to come to Carlsbad Caverns is to walk this paved trail. Even wheelchairs can do some of this walk, though strollers are not allowed. The Big Room is over 8 acres and the winding passage will take you about an hour and a half to walk around. That’s right, this room is so big that it takes 1.5 hours to circumnavigate! As you walk along, the trail takes you past thousands of features like the Bottomless Pit, the Rope to the Spirit World, the Lion’s Tail and many others. 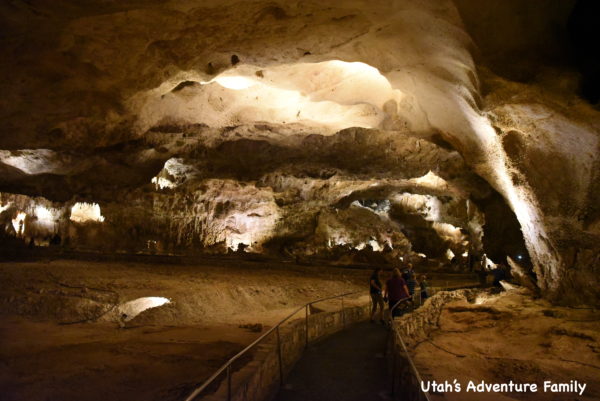 There really are no pictures or words that can describe the immensity of the cavern. You have to see it for yourself. Watch for people or railings in our pictures for perspective. 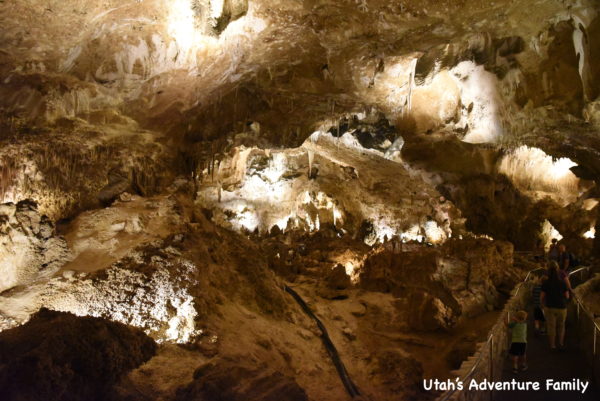 The Big Room is seriously huge. Even with the tiny people, it is difficult to get an idea of the size and layers of the cave. 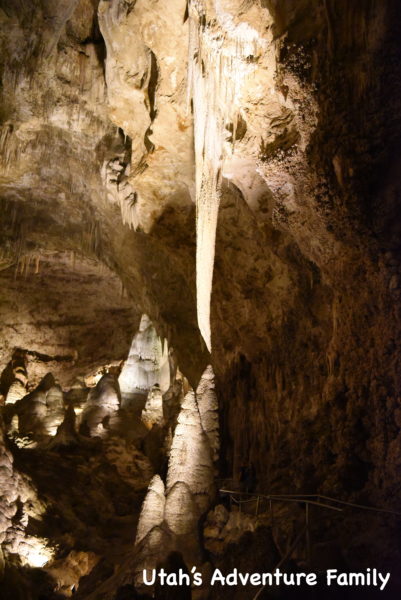 There are so many amazing cave features to see. 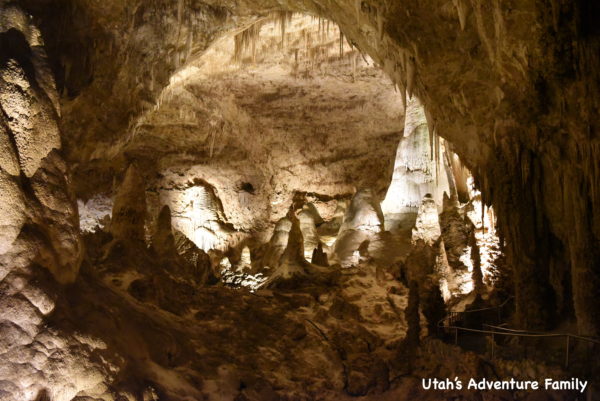 The sidewalk has a railing and winds through the big room. 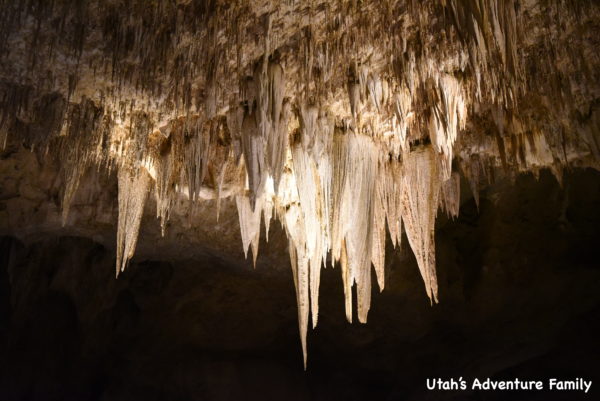 The chandelier is a pretty impressive cave feature. 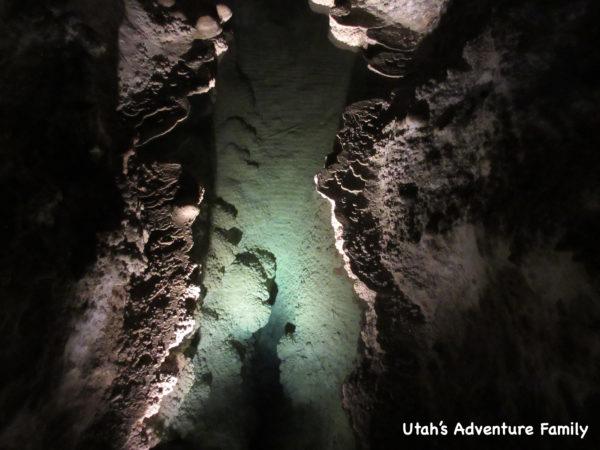 There are lots of different pools along the way and they look green because of the lights. 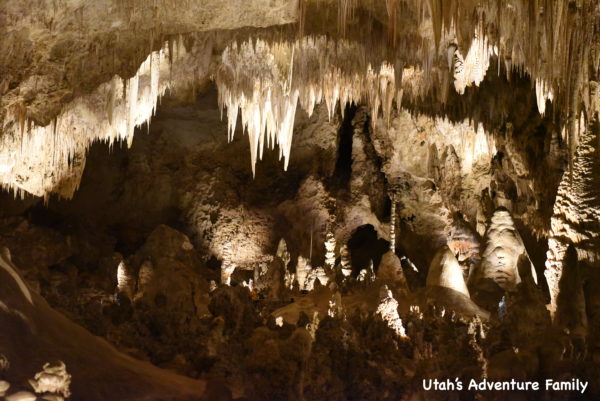 This is looking at the chandelier inside The Big Room.

The Big Room Loop is a mile and a half all the way around, but there is a shortcut that cuts the journey and time in half. If you take this shortcut, though, you’ll miss the Lower Room Overlook. This is where you come to a sheer cliff that overlooks a massive lower passage. It is a little like looking off the end of Dead Horse Point, except it is all underground. We got dizzy just looking off the precipice. Any visitor to Carlsbad should definitely do the Big Room inner and outer loops. It’s flat, paved, and easy. It does require a ticket, but you do not have to arrive at a specific time. You may do this walk at your leisure after showing your ticket to the ranger. 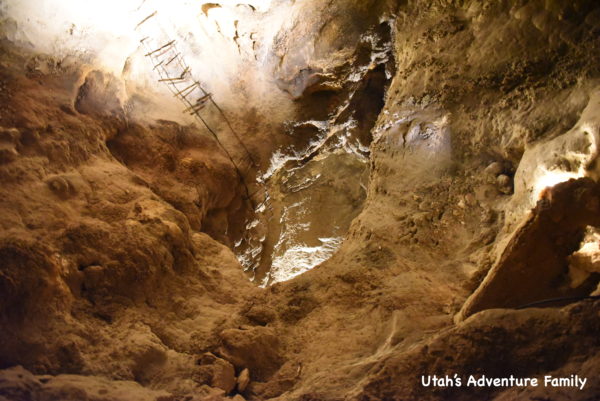 That ladder is how they used to go down to the cavern below The Big Room. Seriously?!?!? 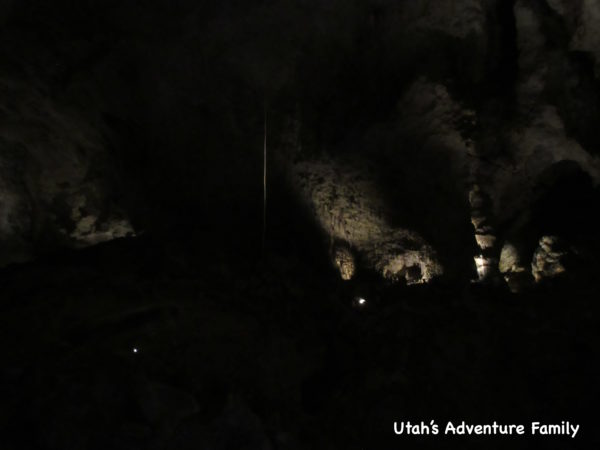 This is the rope that leads 180 feet up to the cavern above the Big Room, otherwise known as the Spirit World. Once a year, one of the rangers climbs that rope to make sure it is still secure at the top, even though no one really explores the cavern above because it is so difficult to access. Mind boggling, isn’t it? I would not want to be chosen to check the rope. The story of how they got the rope up there is even more amazing! 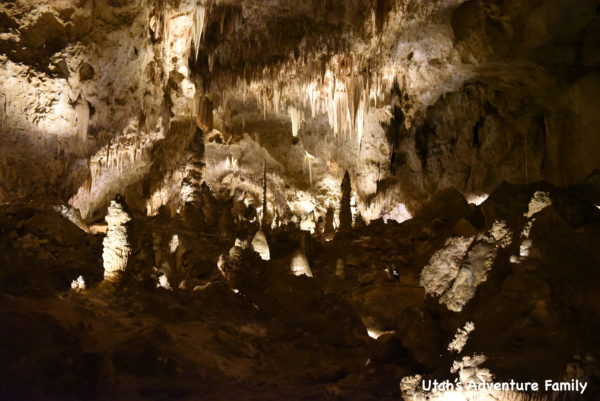 This picture is looking back from the far end of the Big Room. If you look carefully, you can see the Chandelier, and the Rope to the Spirit World. 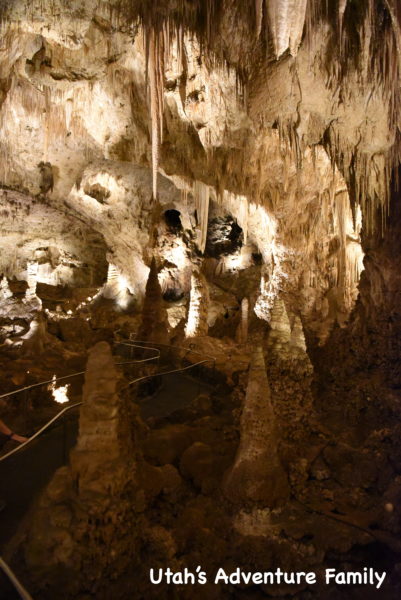 As you follow the trail through this cave, there is truly a feeling of reverence for the beauty of this space. 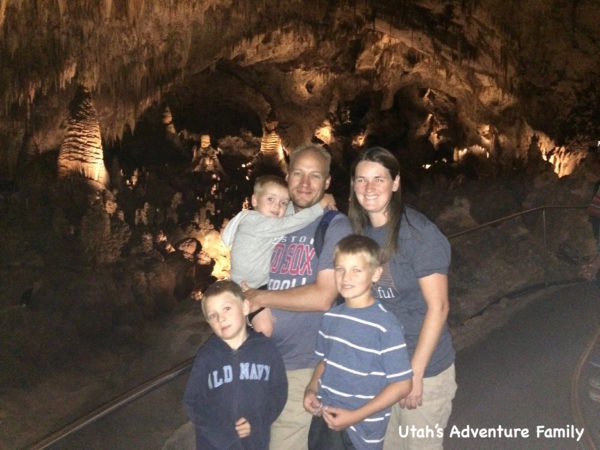 We also recommend the King’s Palace Tour. You must be 4 years-old to do this tour, and there is an additional charge as it is ranger-led. This tour is only offered certain times of the day, so check the schedule online before arriving and plan accordingly. It isn’t a very difficult hike, though they say you have to climb 60 feet of switchbacks. That was child’s play for us. We really liked this extra adventure, though. You go down further into the mountain to a room that has been cleared of floor debris called the King’s Palace. This is where dances and weddings were once held in the early days of the cave. This is also the room where the first pictures of the cave were taken and sent East to encourage visitors. 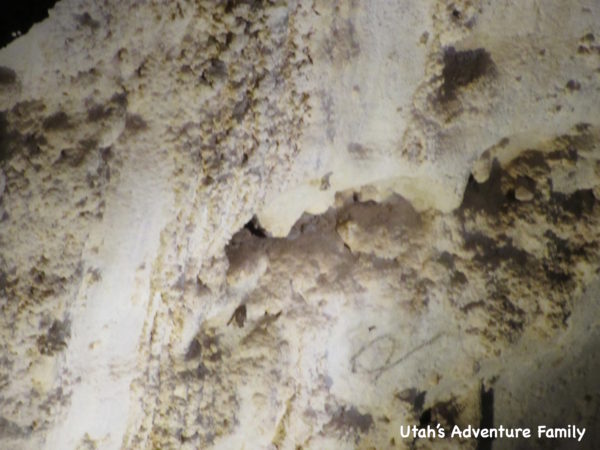 That brown spot in the middle of the picture is a bat that is almost petrified there. 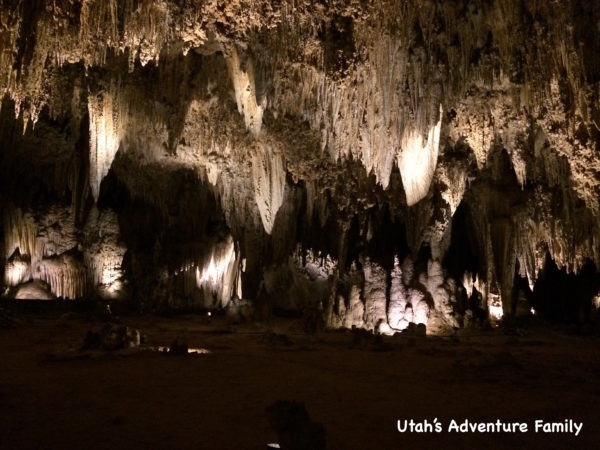 The King’s Palace was beautiful!!! 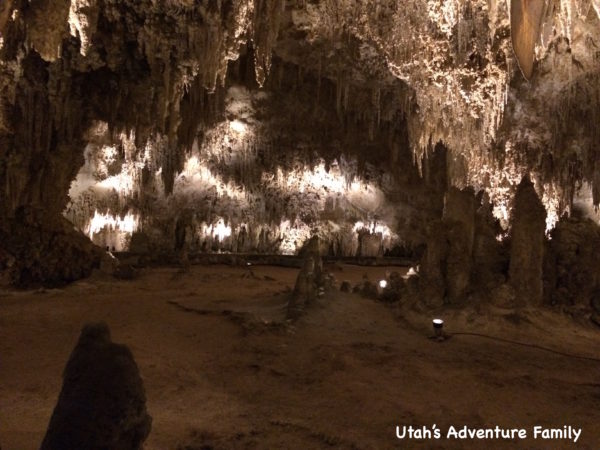 The trail leads through several other rooms, too, including the Papoose Room, and the Queen’s Room, which has the famous Queen’s Draperies that you can see right through. You’ll also pass through a narrow passage called the Keyhole. What we liked most about this special hike, though, is what we learned from the ranger. She told stories of exploration, gave additional facts, told the history of the cave, and answered all of our questions. This isn’t something you get strolling through the Big Room by yourself. That was definitely a perk of the ranger-led tours. 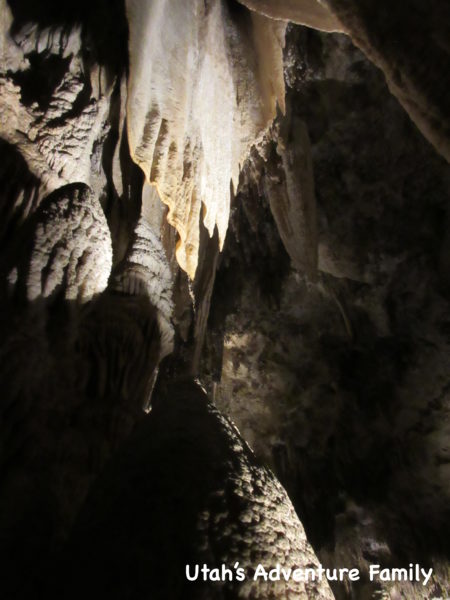 There are some very neat things to see in the King’s Palace. 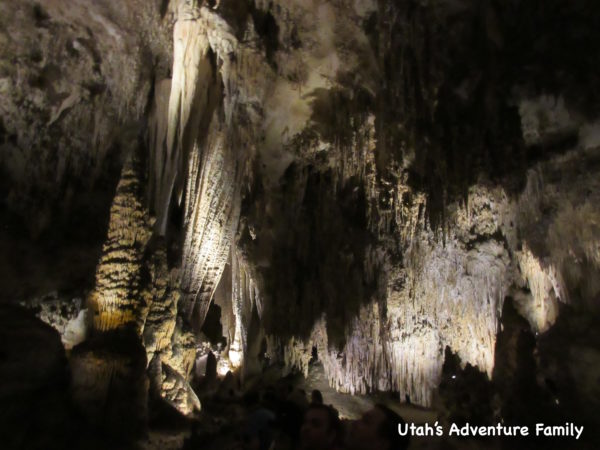 The rooms are tall and massive. 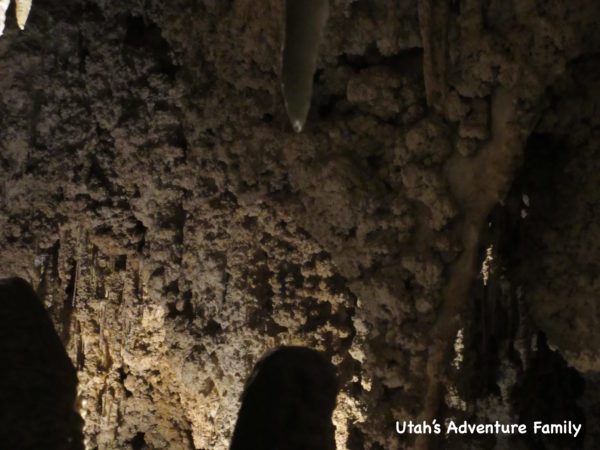 We watched the drips as we listened to the ranger talking. It is cool to see that the cave it still very much alive.

Finally, you should stay for the bat exodus. This is an evening program where up to half a million bats fly out of the natural tunnel and go in search of food and water. There is a ranger talk at the bat amphitheater before, and for us the bats came out right at 8 pm. They come spinning out in a small funnel, which becomes a raging twister of bats (sorry, pictures and video are forbidden). Then, hundreds of thousands of bats fly right over your head. The boys were amazed and sat silently watching the bats come out for nearly 30 minutes! It was one of nature’s amazing spectacles that you shouldn’t miss if you make it to Carlsbad Caverns! 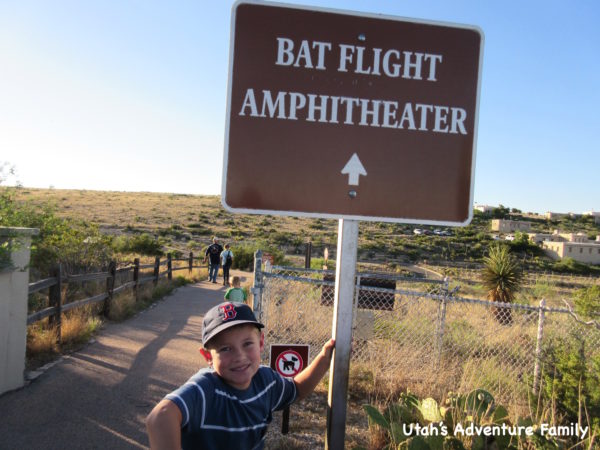 This sign is found just a little ways from the Visitor’s Center. 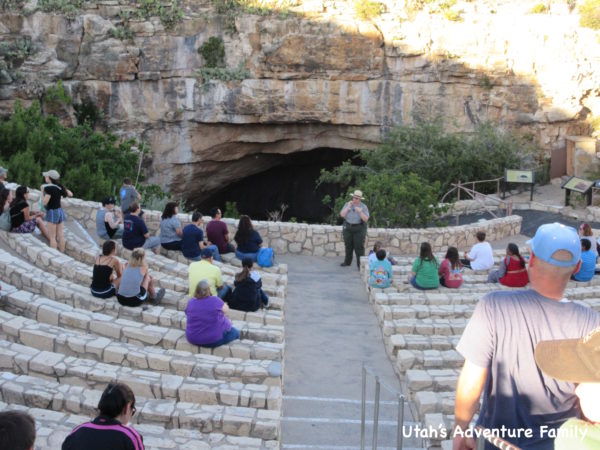 We had to put all our electronics away before the bats came. I wished we could have videoed them. It was awesome to watch. Go and see it for yourselves!