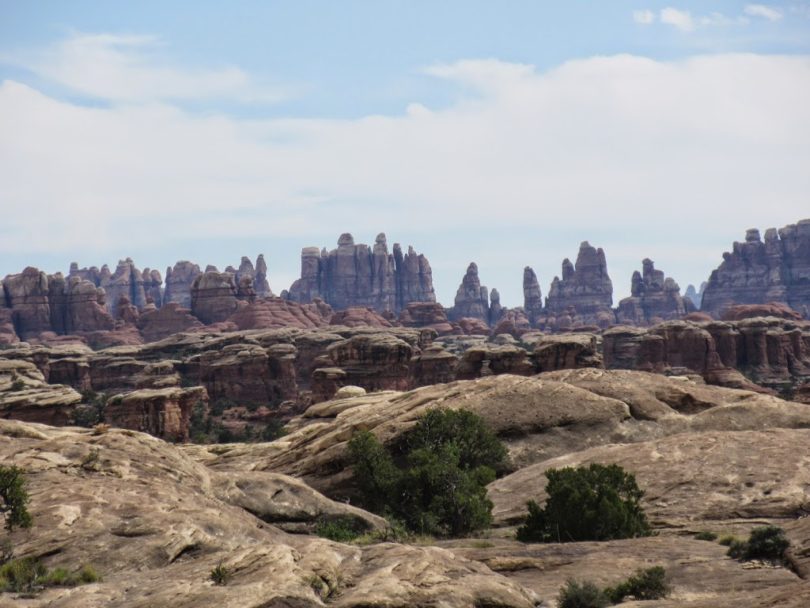 The first thing to note about Canyonlands National Park is that there are three separate sections: Island in the Sky, the Needles, and the Maze. None of them has access to the others due to the rough terrain. In fact, it’s almost 100 miles from the visitor’s center in Island in the Sky to the Needles visitor center. The Maze has no visitor’s center at all, just a ranger station for accessing trip permits.

The nice thing about the Needles section of the park is that it is very quiet. We went on an afternoon in June and saw fewer than fifty people. Meanwhile, Arches and Island in the Sky are usually bloated with visitors. This is for two reasons. First, Needles is way out by itself, far south of Moab, and at the end of a 35 mile road to nowhere. Second, because Needles is no Arches National Park.

There are four accessible hikes for families in the Needles area. The first is called the Roadside Ruin. This is a .3 mile RT loop that takes you to a small stone structure built by Native Americans. The structure was used as a granary, and it is pretty cool, but it’s very small. Especially if you’ve visited Mesa Verde or Hovenweep.

The second hike we tried is called Cave Spring and it was the highlight of our trip. This hike is only .6 miles RT and is shaded for nearly half that distance. The trail is a loop, and as you look at the map in the parking lot, you may be tempted to just walk a hundred yards down the trail and check out the cowboy camp before piling back in the car. This would mean you’d miss the fun of this hike.

After the cowboy camp, which was used throughout the first three-quarters of the 20th century, the trail arrives at an overhanging shelf of rock. It was quite cool there, even though the outside temperature was over 90 degrees. We followed this overhang past the spring and under the rim of the canyon floor. We saw squirrels, birds, and dozens of lizards.

About halfway around the loop, we came to a short ladder. This was the highlight for out 3 boys. Our five and eight year-olds scrambled right up, and Dad even managed with the baby in the backpack. There was a second ladder to climb, too. From there, the trail crosses the rock face (it’s hotter here) back to the car. If you venture to Needles make sure you do this hike above all else.

The third hike we tried was called Pothole Point. Again, this hike is .6 miles, but there isn’t a whole lot to see. The sign describes hundreds of shining pothole puddles teeming with life. The reality is a bunch of dry potholes. There are a few nice views of the Needles from a distance, and the hike across the slickrock is flat and easy for kids, but you won’t see much more than a few lizards.

The fourth hike at Needles is the longest for families (there are some serious trails up to 25 milers) at 2.4 miles. It is called Slickrock Trail. This trail follows the rim of the canyon and is an out-and-back trail. There are 4 viewpoints along the way, at which you can overlook several small canyons.

The brochure says bighorn sheep are “often” seen here, but we didn’t see any, and the back of the brochure asks you to report all bighorn sheep sightings to the ranger. This hike is easy and flat, and the views are very nice. Be sure to pack plenty of water, as there is no shade and it is very hot.

Make sure to stop at the Wooden Shoe Arch, which is a drive-by stop. These are the 5 stops we made while visiting Canyonlands National Park Needles section as a family. It’s a nice way to spend half a day. We stopped at Newspaper Rock on the way in, and then we headed to out to Blanding to explore that area. If your kids didn’t do the Junior Ranger in Island in the Sky, make sure to stop at the Visitor Center and grab a booklet.