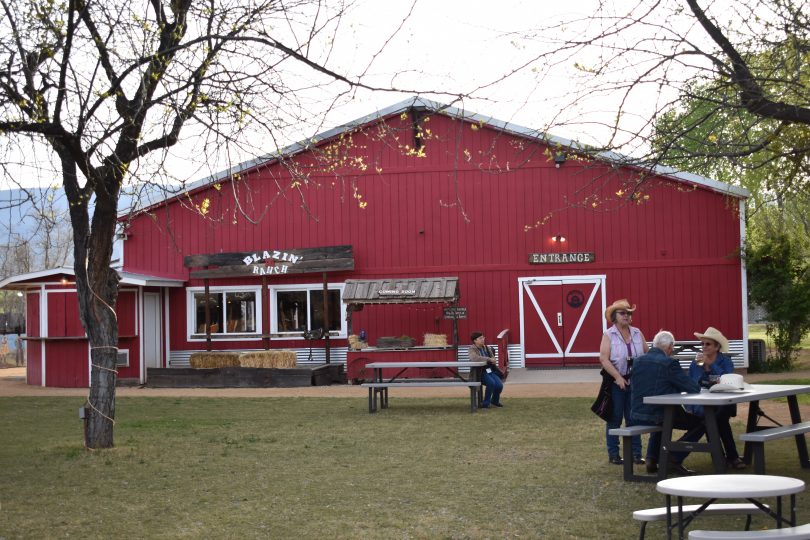 The Blazin’ M Ranch has been around since the 1980s. That’s when a fire destroyed much of the ranch, which prompted them to start the chuckwagon show. There are few signs of the fire now, though. Instead the property is filled with a variety of fun shops and a large theater room.

The shops are arranged like an old city street. You can visit the saloon for a drink, have your picture taken dressed in old west attire, or buy souvenirs including music from the show.

Our favorite shop was the back room arcade. There were several dioramas made of wood. Each one has intricately carved wooden characters that move. A few of the special ones take quarters, dimes or pennies. When the correct coin is inserted, a little show happens that is well worth the price of the coin. We spent most of our time before the show in this area.

There are other activities at Blazin’ M Ranch, too. We walked the grounds and found places to take pictures. They had horseshoes set up for families to play, so we played a few rounds. We even walked down where the animals are kept and visited the pig, cow, chickens, and ponies. Our boys’ favorite was the alpaca named Al Pacacino. When we tired of that, we took a wagon ride around the property. Then a cowboy showed us how to throw a lariat, and we tried our hands at roping. About the only thing we didn’t do was shoot the pistols that use wax bullets (that costs extra).

We spent an hour and a half from five o’clock to six-thirty enjoying the property. Finally, the dinner bell rang and we all lined up for “chuck.” The dinner was the best chuckwagon food we’ve had. There was a baked potato, ribs, chicken, old west style beans, and prickly pear coleslaw, which was surprisingly good. They had an amazing barbecue sauce on the table, too. We went back for as much food as we could eat (or until the food is gone, but we got plenty). Then they brought around a generous portion of apple crisp with a scoop of ice cream on top. We were as full as we could get.

The Blazin M’ Ranch dinner show followed, and we always love the old songs sung with cowboy harmony. They told plenty of jokes, and there was even a visit from the resident rodeo clown, Otis. He told a funny mixed up fairy tale called Rinder Cella. Then he sang in a deep bass voice, Sixteen Ton by Tennessee Ernie Ford. Apparently he has performed on Broadway.

The final number of the show was Ghost Riders in the Sky, which is a favorite. We’d never seen it performed like this, though. As the band sang inside, a man dressed as a ghost rode a horse around outside the theater. A strobe light added a lightning effect. It was really a great way to end the show. Afterward, we went outside and took a picture with the Ghost Rider.

We love these old chuckwagon shows. We’ve been to them all over the west, and we never have a bad experience. If you are in central Arizona, definitely stop at the Blazin’ M Ranch.