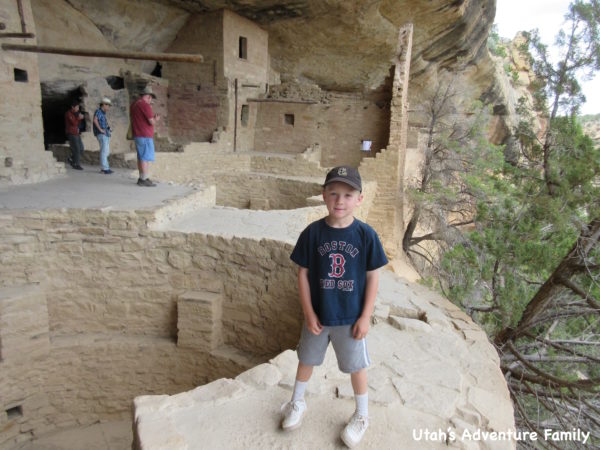 Balcony House is one of four ranger-guided tours in Mesa Verde National Park along with Cliff Palace, Spruce Tree House, and Long House. Balcony House is by far the most adventurous to reach for reasons described below. We left the 3 year-old and the grandparents out of this one, though other people did not.

Before you go you should know that anyone with a fear of heights should avoid Balcony House. There is a 32 foot ladder that climbs straight up the cliff face, and two people on our tour were near tears trying to face down their fears. This hike may not be for people who are large, either, as there is a tunnel that narrows down to 18 inches to crawl through. You have to go through on your hands and knees for about ten feet of crawling. Finally, there is a climb up the slickrock face in steps that have been carved out of the cliff. A chain protects you and it would be nearly impossible to fall, but for those who don’t do heights well, stick with one of the other hikes.

Balcony House has a shaded area to meet at the trailhead where you’ll find your ranger. The descent into the canyon bottom is easy and doesn’t seem very steep. The first stop is the seep spring, which is a tiny pool of water and damp moss in the back of the adjacent grotto. If this was the main water source for the people in the pueblo, it wasn’t very much.

Next you come to a huge ladder. According to park literature, it is 32 feet tall. It is also a double wide ladder so two people can climb at once. The ladder is no problem if you are adept at climbing and heights don’t bother you. After the climb you can walk over to the balcony area.

Balcony House is special because the entire house is built on a small ledge, but it got it’s name because there is an actual balcony on part of the house. There is a retaining wall blocking you from a nasty drop. The ranger will give most of his information in this location, but you are free to walk around the area and look at the kiva. There is a short ladder where you climb around the other side of the Balcony House because the door that used to lead between the two sides was sealed up. No one knows why.

After learning about Balcony House, you will walk a few steps to the tunnel. It is tight, then opens up big enough for you to stand, then narrows back again to about 18 inches. The final walk out hugs the cliff, and you climb steps carved into the sandstone. It is steep, but doable for most people. There is a protective chain, but we still saw people clinging to the wall like ants. Make sure to look for the finger holds that were carved in the rock by the people who originally lived here.

If you have any doubts about Balcony House, try Spruce Tree House or Cliff Palace. But the adventure of Balcony House is a lot of fun for those families who are up for the climbing and crawling.