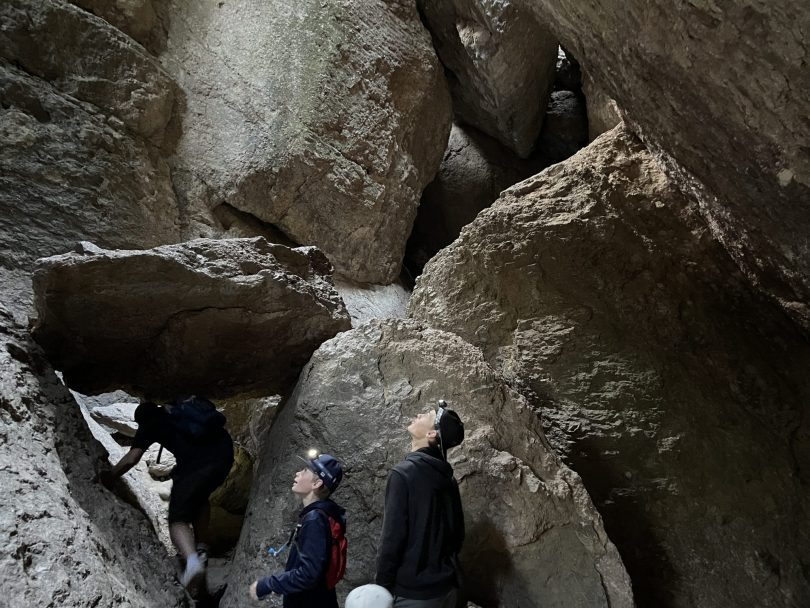 On the remote west side of Pinnacles National Park is a hike through a talus cave. The Balconies Cave is much less visited, and much less developed than the Bear Gulch Cave on the east side of the park. But we enjoyed both talus caves, though they were quite different.

A talus cave is a cave formed by rocks falling instead of carved by water as most caves are. This make the caves very adventurous as you will need to climb and squish through the rocks that have fallen. Balconies Cave is family-friendly, but it would be difficult for very young children.

The parking lot on the west side is fairly large. When we visited in the middle of the week, it didn’t really fill up. If you are there on the weekend, though, make sure to arrive early. Bring plenty of sunscreen, water, and a light to venture through the cave. There is no way to complete this lollipop loop without spelunking through Balconies Cave.

The trail begins by slowly climbing up to the ridgeline. It weaves in and out of the trees, but mostly out as the ground is fairly steep in this section of the park. We enjoyed the first section of the trail that has a few bridges and the hike goes right between large rocks. The climb is slow and gradual, and eventually, the trail forks. At this split, go left, because that will have you climbing up through the cave instead of down, which is a little more dangerous.

Soon the trail begins following a narrow track of water. Then you come to an iron gate. Pass through the gate into the cave. The path through the cave travels fairly straight until it comes to what seems like a dead end. In fact, we followed someone back out the entrance because they told us there was no way through. Eventually, we went to the back of the cave and noticed stairs and a tiny arrow pointing up. It is completely dark in this section of the cave, so you don’t have a prayer of finding the way without good light.

The cave continues to climb, and the climb is only for those with sure footing. Several times we had to boost and help each other, so don’t take grandma on this hike. Carrying a baby in any kind of carrier would be difficult as well. Spelunking through this cave requires a lot of ducking, squishing, and scrambling. We loved it! Finally, you climb into daylight and follow the trail back to the parking lot.

The Balconies Cave Hike was one of our favorite hikes in Pinnacles National Park. We loved exploring through the cave. The caves in Pinnacles do close quite often due to bat activity and other weather related reasons, so check the national park page. To find the Balconies Cave trail, drive from the West entrance of Pinnacles all the way to the end of the road which ends in the parking lot. Begin hiking near the trailhead sign.